You are here: Home / News / Arts and Recreation / ‘The Big Idea’ showcases connections between art and academics
Share this... 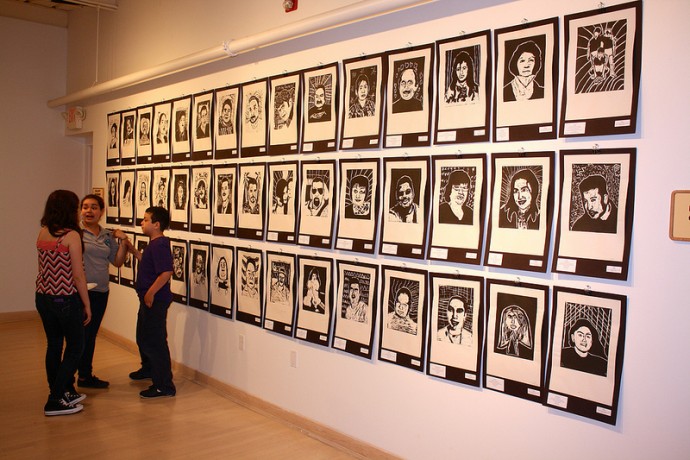 Students created prints with visiting artist Raoul Deal after interviewing their subject about his or her immigration story. (Photo by Maggie Quick)

Collaboration, creativity and critical thinking are on display at an art exhibit created by elementary and middle school students from Bruce-Guadalupe Community School.

“The Big Idea” exhibit at the Latino Arts Gallery, 1028 S. 9th St., is part of the Advancing Literacy and Math through Arts (ALMA) project. ALMA, a research project of the U.S. Department of Education, has fostered collaboration among teachers at the school, which also houses the gallery.

Featuring more than 1,000 art pieces, the exhibit runs through Aug. 30. Students created art related to “big ideas” that they explored in their math and language arts programs during the school year.

“It teaches students to make connections and think critically about different problems and concepts that they can’t necessarily think about in other subjects,” said Christine Woywod, associate professor at the University of Wisconsin-Milwaukee’s Peck School of the Arts and ALMA project director. “They learn to engage and persist with problems visually, express concepts … and stretch and explore what they originally thought they could do.”

Students used graphs to plan artwork and connect it to math; learned about the number pi when creating coiled fiber pots; measured volume when creating time capsule boxes; created comic strips of stories such as “Little Red Riding Hood” to understand sequence; and made lanterns and wrote poems to honor community members. 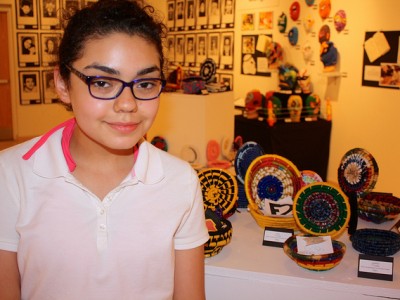 Alexa Lovo poses near an exhibit that displays her coiled fiber pot. (Photo by Maggie Quick)

Prints, decorated tiles, memory boxes, clay pots, Mexican wrestling masks, fiber pieces, written compositions, drawings and dioramas are on display in the gallery, along with visual journals students used throughout the year to plan their projects. For many of the units, students studied a specific artist and used his or her style to guide their projects.

Working with visiting artist Raoul Deal, students learned about their immigration stories in the study units devoted to journeys and cultural identity. Deal, who is on ALMA’s board of directors and is a faculty member at UWM, took the students to see his recent exhibit at the Latino Arts Gallery of woodcut prints that tell the story of Milwaukee immigrants.

“We got the kids to find out what their own immigration story was,” elementary art specialist Ryan Krippendorf said of Deal’s involvement. “A lot of the students recognized someone in the portraits, like a sister, aunt or neighbor.”

Deal had third- and sixth-graders interview family members about their immigration stories and then write about what they learned. Some stories were harrowing, such as incidents of parents crossing rivers with children strapped to their backs. Students also used photos of their interview subjects to create linoleum block prints.

“It’s important to me they know their immigration stories, particularly when they’re difficult,” Deal said. “They need to recognize the sacrifices their family made. They might face immigration issues as they get older.”

Woywod said the students are proud of what they learned. Third-grader Mia Dominguez said her favorite units were culture and identity because she enjoyed learning about her father’s immigration story. “He had to leave his family,” she said.

Elementary art specialist Laurie Navarro said it makes sense to bring ALMA to Bruce-Guadalupe Community School, because the school has a “strong art program to begin with. This is the next step.”

Kristina Jacobs, a sixth-grade language arts teacher, said teachers have grown because of the program and students and the program helps “build a whole student.”

“The beauty is a kid might not be good at math but they might be really good at reading and writing, and they can understand math through reading and writing,” Krippendorf said. “And kids need art. It helps them think differently. [Art teaches] problem solving outside of the box,” he added.

Jacobo Lovo, a middle school art specialist, said one of the key goals of the project was to help students understand themselves better. “We want them to become aware of who they are as individuals, and also who they are in the community; not just the school or Latino community, but also in the city,” Lovo said.

Describing the exhibit, Woywod sad, “What the art specialists have tried to put together is an overview of what the students have experienced.”

This is the third year of the four-year ALMA program. The United Community Center (UCC) received one of 12 national grants for the program, according to Scott Evans, dean of the UWM Peck School of the Arts. UCC partnered with Latino Arts, Inc. and the Peck School for the project. UWM professors and students help with research and class projects.

The first year of the grant was used for planning. Third- and sixth-graders were involved in the second year, then fourth- and seventh-graders were added last year. Next year, fifth- and eighth-graders will be included. Participants expect the program will continue after the grant ends.

“There is definitely interest in continuing this, especially the visiting artist and visual journals,” Woywod said. “Teachers also want to collaborate together.” Over the next year, ALMA will work with the teachers to figure out what parts of the program can be sustained, and how.

“It’s great to see the progression kids make through the curriculum,” Krippendorf said. “There is work that third graders have done that when I show it to the other teachers they say, ‘Oh, you teach high school?’”

Deal said the work is “beautiful” and that it is always a pleasure to work with a school that values the arts.

“To me the value of it is students are engaged in school,” Deal said. “They have a strong sense of who they are and who they come from [which] contributes to well-being … It’s a children’s exhibit, but it’s an important one.”