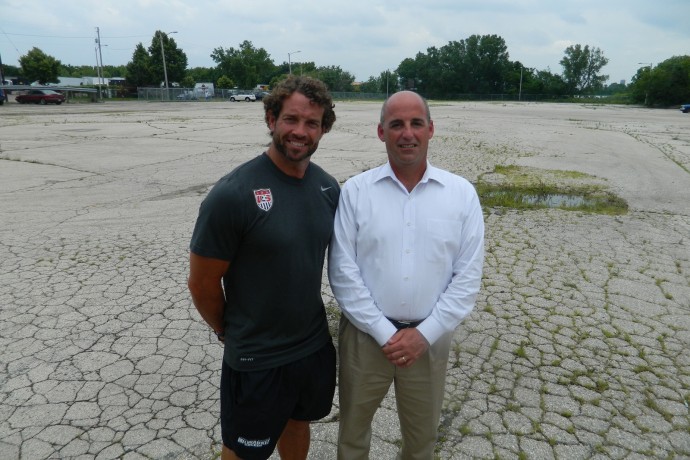 Gregory Dorf and Jake Provan plan to build the Urban Futsal Center of Milwaukee on this lot at 5th Street and Harrison. (Photo by Eric Oliver)

Jake Provan was 5 years old when he started playing soccer. Provan played throughout high school, graduated from the University of Wisconsin-Milwaukee and was eventually drafted in the second round by the Detroit Rockers, a professional indoor soccer club.

He left the Rockers, joined the Milwaukee Rampage, won a national title and went back to UWM to get his master’s degree in business and marketing education.

Gregory Dorf, Provan’s business partner, has been involved in youth athletics for the last 15 years. He has seen how sports can change a child’s life, and he wants to make sure every child has that opportunity.

Together, Dorf and Provan are trying to start the first nonprofit futsal and soccer academy in Milwaukee.

Futsal is a variation of soccer that is played indoors on a smaller field with a ball that is less bouncy than the one used in standard soccer. Each team is made up of five players. According to United States Youth Futsal, it is the only indoor form of soccer endorsed by FIFA, the organization that governs soccer around the world. 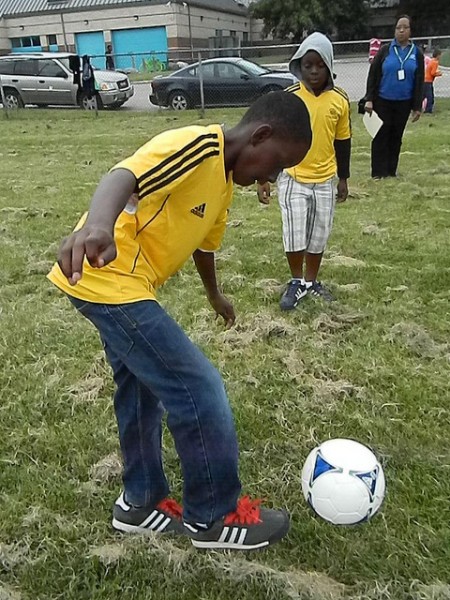 “That’s what I grew up playing without even knowing what it was called,” Provan said.

Provan was raised in a blue-collar family in Cudahy on the South Side of Milwaukee. He recalls that sometimes his house would flood to the point that he would have to share a room with his three brothers, sister and parents.

Luckily for Provan, he made his way into soccer. He said there were times when he and his youth teammates would go to Brookfield to train and afterward would go to somebody’s house and see indoor swimming pools, locker rooms and satellite dishes.

“We were like, ‘Whoa! This is how people live?’” Provan said. “These kids had everything for soccer, they were all in the Olympic development program, they all played for Brookfield and they were all on the best teams in the state.”

That exposure to the bigger, better clubs in Wisconsin inspired him to seek out clubs that were willing to provide him with scholarships.

Provan would like to help other young players in a similar way. The main goal of the Urban Futsal Center of Milwaukee is to be a place where young players can improve athletically as well as scholastically.

“We are going to do all these clinics, call it an academy and do whatever it takes to get these kids trained,” Provan said. “We will mentor them, tutor them and hopefully we can get them exposed to clubs and the clubs exposed to them. We can find some opportunity to get those kids out there.”

Dorf and Provan said developing a state-of-the art facility is a necessary first step to providing these young people a future.

“There are other futsal facilities, but they are usually in warehouses,” Provan said. “This would be dedicated to futsal, state-of-the-art, a model program to get kids in the inner city exposure to where all these successful clubs are, which is usually in the suburbs.”

Dorf said he would like to see the futsal facility be a place kids could go to mature as athletes.

He believes that by connecting players to some of the best coaches in the state to train, the players could catch the eye of top-tier teams when it comes time to move up to organized clubs.

Dorf and Provan don’t want to stop there, however. They are hoping that the academy is the first step to college for their young athletes.

The duo has secured property on an empty lot at 5th and Harrison where they could build a futsal field. They are seeking foundation funding to buy additional land for outdoor soccer fields.