You are here: Home / News / Arts and Recreation / Anti-violence parade and rally ‘counter culture of violence’ through arts
Share this... 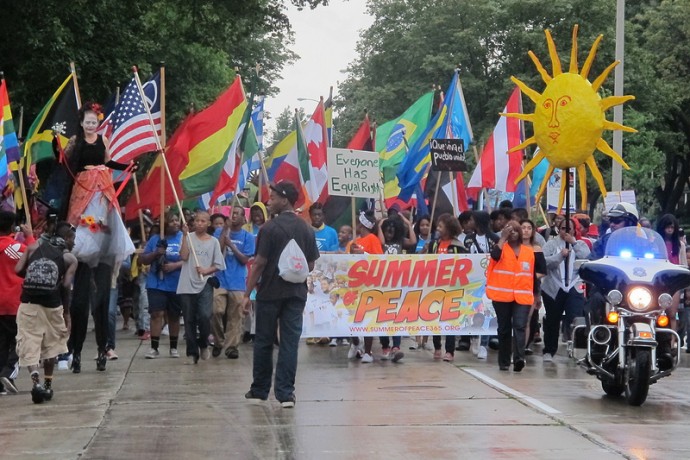 Participants begin the Summer of Peace All City Parade at Washington Park. (Photo by Shakara Robinson)

Despite a rainy day, more than 200 people combined their art and their energy to foster peace and reject violence.

The vibrant Summer of Peace All City Parade kicked off at Washington Park, with residents, youth and participants from various community organizations holding signs and guiding colorful floats as they marched north on Sherman Boulevard to Sherman Park.

Summer of Peace 365 is a year-round peace arts program, founded in 2002 by Tanya Cromartie-Byrd and Fidel Verdin. The program provides a platform for young people to create and share principles of non-violence, racial justice and civic responsibility.  In its 11th year, the program started as a grassroots response to the war in Afghanistan, Verdin said.

“There was a climate of war and attitude of confrontation,” Verdin said. “We started this as a method of resistance for people who don’t want to be a part of that.” 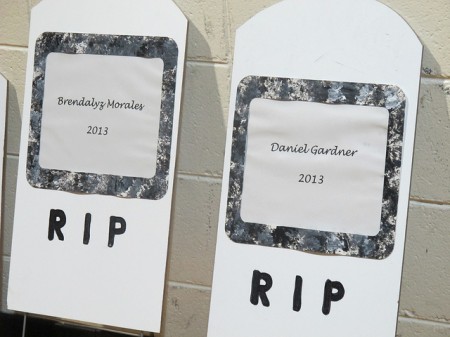 Paper gravestones pay tribute to victims of violence during the Summer of Peace rally inside the Mary Ryan Boys & Girls Club. (Photo by Shakara Robinson)

Verdin said planning and organizing is no easy task, but the program and parade continue to gain momentum. “People didn’t understand because we weren’t part of a company or huge organization,” he added.

Now, the event is larger than ever and has expanded to other cities. Chicago kicked off its Summer of Peace 365 series July 20 through a number of park events.

“We’ve started a phenomenon,” Verdin said. “The conversation is to counter the culture of violence by acknowledging and allowing the young people to express themselves through art.”

After the parade, participants gathered inside the Mary Ryan Boys & Girls Club for a rally. Dancers, musicians, entertainers and exhibits of youth projects carried the “no to violence” theme, with some speakers sharing the personal pain of losing a loved one to gun violence.

Mayor Tom Barrett appealed to the group for help. “I need your help in saying no to illegal guns and violence,” adding, “I get a sick feeling in my gut every time I get a phone call that someone has been murdered in Milwaukee.”

Verdin and the audience made a plea of their own.

“We need your help, too, mayor,” Verdin told Barrett. “We know the policy makers have the control to make things happen that can help our young people.”

Milwaukee Public Theatre and Milwaukee Mask and Puppet Theatre offered free Make-A-Parade workshops for Summer of Peace and other events. MPT made a large float for the summer parades.

“This is all part of our mission,” said Barbara Leigh, artistic producing director at MPT. “The arts are fundamental and we make sure to keep it in the neighborhood.”

The Summer of Peace All City Parade and Peace Rally is partially funded by the City of Milwaukee Arts Board, with support from the Wisconsin Arts Board and the National Endowment for the Arts.