You are here: Home / News / Arts and Recreation / Field of dreams to become reality for Boys and Girls Club teams
Share this... 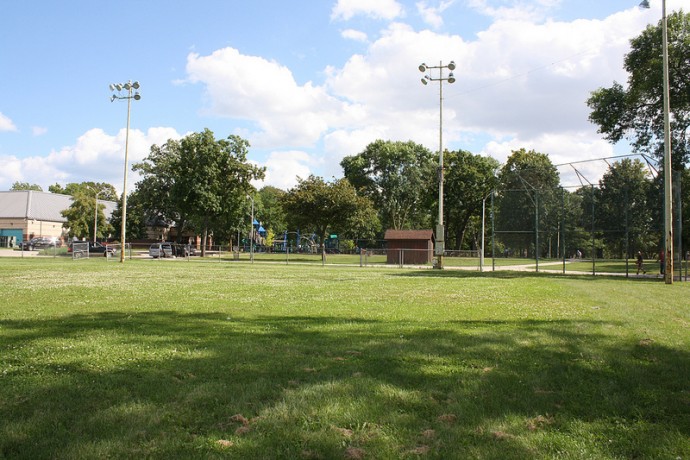 The baseball diamond at Sherman Park is overgrown with grass now, but it will become the home field for the Boys and Girls Club of Greater Milwaukee in 2014. (Photo by Maggie Quick)

Fernando Langford and Bontae Payne were using the baseball diamond at Sherman Park one sunny afternoon not for baseball, but for basketball. The two teens were seeing if they could throw their basketballs over the backstop behind home plate.

Langford used to play baseball; Payne never has. This is something Vincent Lyles, president of the Boys and Girls Club of Greater Milwaukee, hopes to change when the Sherman Park diamond, 4299 W. Burleigh St., is renovated with funding from the Baseball Tomorrow Fund and Brewers Community Foundation.

“Our objective is to fill that thing up and have a schedule going that’s nonstop,” Lyles said. There are currently 200 kids participating in the Boys and Girls Club baseball and softball programs. “We anticipate growing that number significantly,” Lyles added.

The renovations will include a new infield, backstop, dugouts and bleachers. Construction starts this month and the field should be open for the 2014 baseball and softball seasons.

“In baseball it’s important to have a safe field,” said Cathy Bradley, executive director of the Baseball Tomorrow Fund. “Kids can be afraid of the ball … We want them to learn in the best environment possible.” 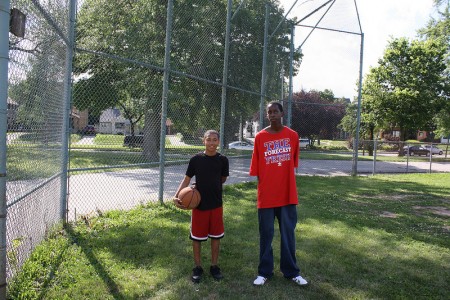 This will be the first home field for the Boys and Girls Club of Greater Milwaukee teams. Lyles hopes the field will inspire all 38 locations of the area club to have Little League and softball teams.

“We could even have inter-agency competitions with COA [Youth and Family Centers] and Silver Spring [Neighborhood Center],” Lyles said. “The opportunities are endless.”

Lyles is inspired by the success of the Boys and Girls Club of Greater Kansas City, which has received grants for multiple fields and has a “really robust baseball program.”

The club uses sports to engage kids while teaching them valuable teamwork, collaboration and leadership skills, according to Lyles. “You have to meet them where they are,” Lyles said. “[We use] whatever tools are out there to encourage them to be more rigorous in academic pursuits; to give them the courage to raise their hand in class; to make them show up more often at school.”

He thinks the field and the leadership development opportunities it will offer will be especially good for girls in the club. “Girls need that. They’re going out in a world still dominated by men,” Lyles said.

“There’s a lot of girls’ softball played in the suburbs,” Lyles added. “It isn’t going on in the city. Forty-five percent of the kids we serve are girls and we want to provide a venue for them [to play].”

The club decided to put the field in Sherman Park because the Mary Ryan Legacy Club is located there, at 3000 N. Sherman Blvd., and many leaders come from the neighborhood, including last year’s Youth of the Year.

The park also was chosen because it is in the center of the city, is easily accessible from all directions and has plenty of parking. Lyles added that there is a “good synergy” in the surrounding neighborhoods, but no one is currently advocating for baseball and softball in the area. “We’re supporting [and] encouraging the game,” Lyles said.

Bradley said Baseball Tomorrow looks for such support among its grant applicants. “We want to work with organizations that want to put a greater emphasis on getting more kids to learn and enjoy the game,” he said. The fund has given 16 grants in Milwaukee in its 14 years and has worked with the Milwaukee Brewers on sports-equipment collection drives. Baseball Tomorrow primarily serves low-income communities, according to Bradley.

“It’s the icing on the cake that it was Sherman Park,” said Cecelia Gore, executive director of the Brewers Community Foundation, noting it is near Miller Park, and Major League Baseball Commissioner Bud Selig played there. “We knew a lot of young people would be able to use it for their athletic development,” she added.

Langford and Payne agree that a lot of people would use the Sherman Park field if it was nicer. Next year, they just might be playing baseball.