You are here: Home / News / Arts and Recreation / Rival MPS football teams face off to raise scholarship funds
Share this... 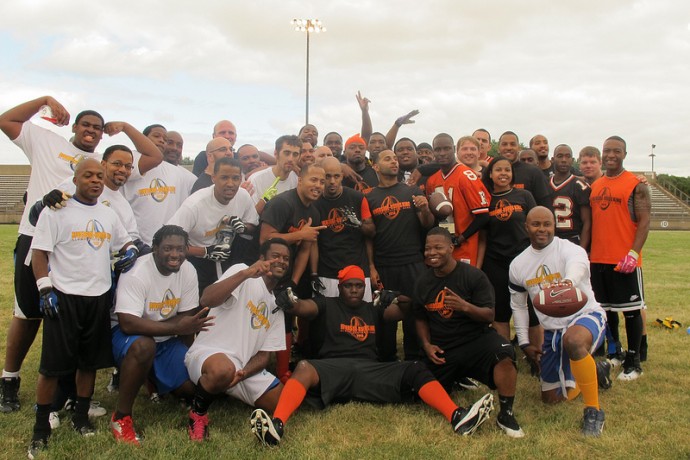 Players in the 4th Annual Flag Football Scholarship Game celebrate together after the game. (Photo by Shakara Robinson)

A long-standing rivalry between two Milwaukee Public Schools played out at a charity flag football game, and this time everybody won.

The Rufus King Generals and Riverside Tigers squared off in the 4th Annual Flag Football Scholarship Game at Custer Stadium, with the orange and black Riverside colors dominating the gold and blue Rufus King colors in the stands.

The teams raised money through ticket and concession sales, which will be used for college scholarships for graduating seniors from both schools. NNS was unable to find how much money was raised this year. Past events have raised more than $2,000, according to a press release promoting the event

Richard Voden graduated from Riverside High School in 2007 and played in his third alumni game this year. 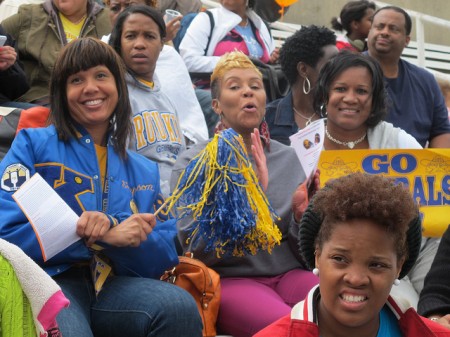 Fans of the Rufus King Generals cheer on their alma mater at the 4th Annual Flag Football Scholarship Game. (Photo by Shakara Robinson)

“It’s nice to see two rival teams come together and play old-fashioned flag football,” said his mother, Kathy Voden. “They’re laughing and having fun with each other, and that’s what I like. There’s no friction or arguing.”

The game started as a 20th reunion celebration for the schools’ class of 1990, but quickly evolved into a celebration for all MPS alumni and athletes. This year, players who graduated from 1988 to 2010 suited up and showed off their physical abilities in the name of charity

“The beautiful thing about the rivalry is that academically, Rufus King and Riverside are scholar athletes,” said Dr. Ramel Smith, a psychologist at Children’s Hospital and Rufus King alumnus who co-founded the event. “Bringing the two teams to the field like this makes it classic.”

Dr. Demond Means, co-founder of the event and superintendent of the Mequon-Thiensville School District, is a Riverside Tiger.

“It’s not looking good for them right now,” Means jokingly said during the third quarter when the Tigers were up 14 to 0.

Christopher Cole, a 2005 Rufus King graduate who played on the school’s football team for four years, was ready to take to the field as he watched the Tigers maul the Generals. “I’m glad it was for a good cause, but as an athlete and competitor, I don’t want to see us lose,” he said. He signed up to play in next year’s event after the game.

Christopher’s sister, Shannon Cole, and her friend, Janelle Wesley, graduated from Rufus King in 2008. They said the score was bearable since the game was for a charitable purpose.

Next year, the rival teams will play together against the MPS All-Stars in a “pink out” game, with half of the proceeds going to the American Cancer Society, and the other half going to the two schools for scholarships. It will be the first time funds raised from the game will be donated to an outside organization.

The Riverside Tigers won, 22 to 12, which evened the competition at two wins each.