You are here: Home / Home / Carousel / Donors, shelters have mixed success providing bread to the hungry
Share this... 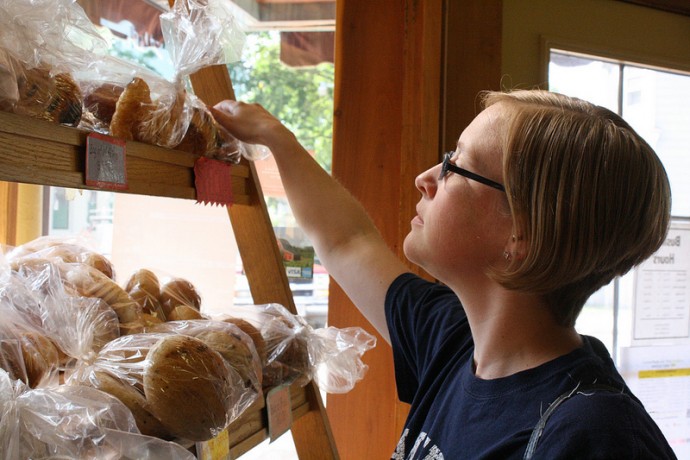 Julia Jourdan shops at the Wild Flour. Her husband gets buns for his Eats & Treats food truck from the bakery. (Photo by Maggie Quick)

Larry Ampe feeds the hungry. He also feeds the Dumpster.

Six days a week in the middle of the afternoon, hungry people start lining up outside of St. Benedict the Moor, 1015 N. Ninth St., for the free community meals he organizes as the parish’s kitchen manager.

Ampe responds by feeding his guests full meals such as Italian casseroles and turkey dinners with all of the fixings.

But although preparing 350 meals a day on average is quite a feat, it is the food he does not serve that continues to perplex him. Ampe says he routinely throws away loads of donated bread.

Ampe is not alone. Those who feed Milwaukee’s hungry each day, along with local bakers, agree that it is frustrating to see bread go to waste when people are hungry. Issues also arise from slicing and packaging requirements, taste preferences of meal program diners, delivery responsibilities and the shelf life of certain breads all play a role in the problem.

“We want sliced bread, individually packaged,” said Ampe, who gets donations of leftover sliced bread from Breadsmith.” “We can’t take the bread that’s on their shelves. Our guests wouldn’t take that bread. I don’t have the time or the equipment to slice it. We’re pretty open to taking anything they bring but that’s because we have a big Dumpster.”

The meal program at St. Ben’s has never needed to buy bread for sandwiches in its 43-year operation. In addition to getting bread from Breadsmith, the program receives donations from individuals, Panera and other high- quality bakeries.

The artisan breads that the program gets do not last as long as store-bought breads because they do not have preservatives, but they are healthier. They also often have hard crusts or unusual seasonings such as rosemary or garlic.

“This isn’t really the type of bread our guests like,” he said. “If my guests had a choice, they’d probably want Wonderbread. The kind that sticks to your mouth.” 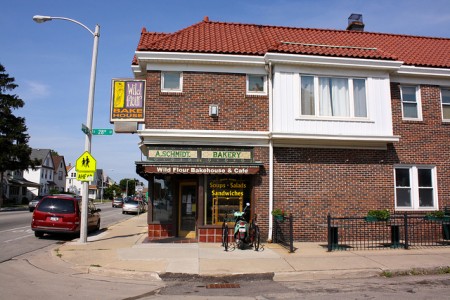 “We have such a good, quality product,” Brown said of their leftover artisan loaves. “So many people can’t afford this … We have your whole grains, your higher quality products just sitting there … [But] it doesn’t make sense to have somebody slice it if we’re busy.”

The Rescue Mission serves about 800 meals a day, amounting to about 250,000 meals annually.

“If it’s not sliced it becomes cumbersome,” said Pat Vanderburgh, executive director of the Rescue Mission. “There’s so much other [donated sliced] bread, it wouldn’t get used.”

Like St. Ben’s guests, the diners at the Rescue Mission would rather have simpler breads, resulting in gourmet donations occasionally ending up in the trash. The Mission gets bread from bakeries and individuals. It used to get bread from a Panera but stopped because it wasn’t sliced.

“They have wonderful bread,” Vanderburgh said. But “if we can’t use it, we don’t want to send our driver out there.”

“You just feel bad about doing any of that … It’s the blessing of living in America, there’s too much bread.”

When the Rescue Mission has extra bread, it tries to give it to other meal sites and even food pantries.

“We’ve been pretty effective in getting donations to others that can’t get them,” Vanderburgh said. “Bread in particular, when you get it you have to use it pretty quick.”

“A food pantry could possibly use unsliced loaves,” Vanderburgh added. “When we can’t use it, we can’t find enough other people to use it, or the donation is too big, sometimes food gets thrown away.”

Kristi Carlson, director of marketing for Breadsmith, said the bakery can’t keep up with demand for its artisan bread.

“There’s never a shortage of needs,” she said. However, donating is not always easy. “We can never guarantee an amount,” she said. “If they need a for-sure partner that can guarantee, we’re not necessarily the best fit.”

Slicing is another issue. “Because it is a donated product we don’t want to put any extra labor into a day-old product,” Carlson said.

However, the company is happy to donate if it can. “What we truly believe is we don’t want that bread to be wasted. We’d much rather give it to those in need,” Carlson said. “We hope everyone can find a partner.”

Wild Flour donates to a few places but is still forced to throw out pounds of leftover bread. Brown thinks some of the bread is unwanted because it typically lasts only for three days.

“To waste food is just ridiculous. It’s wasting money, it’s wasting everything,” she added. However, she says the lack of preservatives makes the bread freeze better.

“People can stock up and not have to come out as much in the wintertime [if they freeze it now],” Brown said. “Maybe if that’s out there people would be more likely to come in” and get bread.

Ampe is also throwing out loaves at St. Ben’s, even though he always puts extra bread on a counter for guests to take home after dinner.

“I think some of our bread goes to feed pigeons,” he said of the loaves that he leaves out in the cafeteria.

Mike Czarnecki, founder of Food for the Hungry and bread manager for Hunger Task Force Milwaukee, distributes bread to 1,600 pantries and meal programs statewide and has no slicing or packaging guidelines for donations.

“There’s not enough bread most of the time and I have 240 suppliers,” Czarnecki said. He gets donations from Pepperidge Farm, Aldi, Einstein Bros Bagels, Starbucks, Panera, Red Harvest and Breadsmith, among others.

“I try to get drivers to come out from the places but some of the places just don’t have the help,” he said. “We try to do as many deliveries as we can but sometimes we can’t do them all.”

He also tries to move bread where it can be used. “Wasting is not my part of the game,” Czarnecki said, adding that if he learns an organization throws out extra bread, it will no longer get donations from him.

Despite the problems, Czarnecki says that he appreciates the efforts of bread donors and volunteers.

“I’ve met so many beautiful people from doing this,” Czarnecki said. “It’s amazing how these people are so caring.”