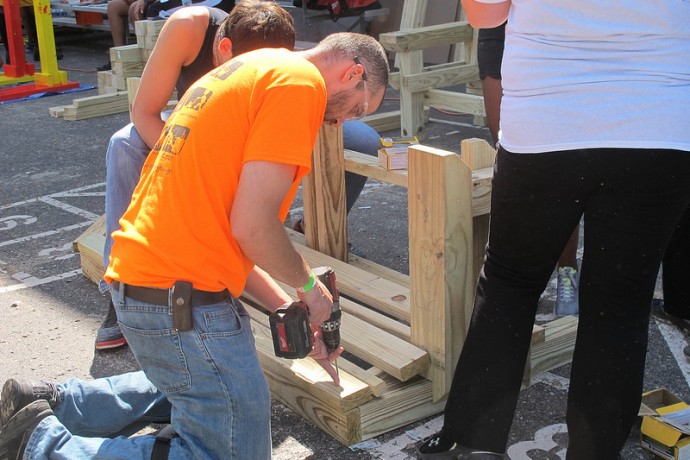 Volunteers build a wooden bench for a KaBOOM! playground at the Northside YMCA. (Photo by Shakara Robinson)

Children who live near the Northside YMCA now have a new place to play, thanks to hundreds of volunteers who recently built a playground from the ground up.

The Brewers Community Foundation approached KaBOOM!, a national nonprofit that partners with communities to build playgrounds, about the project. KaBOOM! scoured the region looking for a site in need of a new playground and chose the Northside YMCA at 13th and North Avenue. 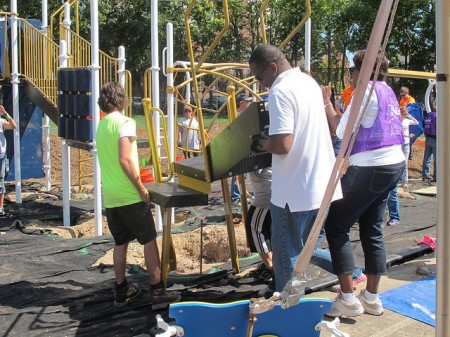 “Every child deserves to have a great place to play,” said Alyssa Ross, communications coordinator for KaBOOM! “Playgrounds are absolutely critical to the development and well-being of children, and studies continue to show that children who live within walking distance of a park or playground are happier and healthier.”

Children were included in the planning process, Ross said. A “design day” on May 15 allowed children to draw their idea of a dream playground on large sheets of paper. KaBOOM! then took those drawings and incorporated them into the final design.

“The playground will have several elements that encourage climbing, including a rock wall, spin cup, swings and monkey bars,” Ross said. “On almost every design, the kids included a monorail, so there was no question about adding that on to the playground.”

The average cost of a KaBOOM! playground is between $80,000 to $100,000. The Brewers Community Foundation provided most of the funding and the YMCA of Metropolitan Milwaukee contributed about 10 percent of the costs. Supplies and tools were all donated.

The group’s playgrounds are built in one day, and volunteers have to work together and work fast to complete construction on time. More than 200 people participated in the YMCA build, including the Brewers Wives, staff from The Brewers Community Foundation, YMCA, neighbors and city residents.

Cecelia Gore, the executive director of The Brewers Community Foundation, said funding the playground is in line with the foundation’s goal of supporting organizations that focus on education, health, recreation and basic needs.

“We’ve had a long standing partnership with the YMCA and thought they’d be a great partner for the KaBOOM! playground,” Gore said. “It’s important for young people to be mentally and physically fit, and this playground will put them on a path towards a healthy life.”