You are here: Home / News / Arts and Recreation / Painted facades for foreclosed houses ‘tool for stabilization’
Share this... 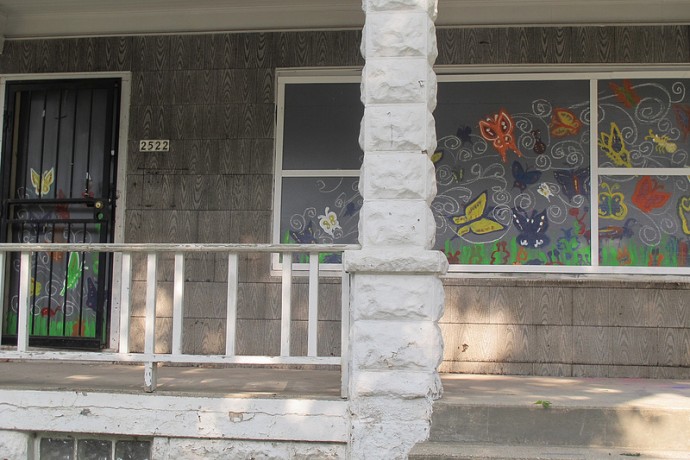 A city-owned, foreclosed house on north 38th Street receives a makeover from neighbors and a Chicago-based foundation. (Photo by Shakara Robinson)

When community volunteers started working to beautify the exterior of a foreclosed house on North 38th Street recently, a group of neighborhood kids asked if they could participate.

“I want to help them clean up,” said 11-year-old Taliyah Cooper. “Our neighborhood looks bad. These boarded up houses … need to be painted over.”

Taliyah learned how to use a drill and nail gun and other young people helped paint plywood boards with flowers to cover the doors and windows of the vacated home. Although artists work on the project, it isn’t all about art.

“The main thing is [that it is] an inexpensive way to make buildings look more attractive and more secure, keeping people from squatting, breaking in, things like that. It’s a tool for stabilization,” said Chris Toepher, executive director of The Neighborhood Foundation, which is based in Chicago. 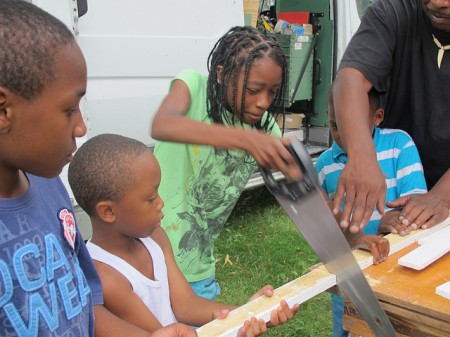 The city enlisted the non-profit organization to bring the program to Milwaukee to help reduce the stigma attached to boarded-up buildings. Toepher has led about 30 projects in Milwaukee so far, including residential and commercial properties. The foundation also has worked in Chicago, Cleveland and Minneapolis.

The Department of Neighborhood Services decided to implement the artistic board-up concept after representatives a presentation at the Reclaiming Vacant Properties conference, hosted by the Center for Community Progress in 2012.

“First we talk to neighbors and neighborhood groups to [learn] what they want to see,” Toepher said. “We also look at the historical value, what the building and neighborhood used to look like, and take it from there.”

This wasn’t the first board-up project Caston helped with. He said he unknowingly walked into dangerous situations at some of the foreclosed properties. “Sometimes there is nefarious activity. Drugs and guns are sometimes hidden in these houses. It lets you know the magnitude of the problem.”

One resident of 38th Street, who asked not to be identified, complained about the program, saying that it does nothing to solve the foreclosure problem.

Laura Jensen, Milwaukee area coordinator for The Neighborhood Foundation, agreed that artistic board-ups are not the ultimate solution, but they do deter some of the problems associated with the vacant homes. As of publication, the city had not responded to a request for comment.

“We have a zero percent graffiti and re-entry rate on the properties we work on,” Jensen said. “From the street, the house doesn’t scream, ‘vacant property.’ We choose these properties because they are a magnet for problems.”

The city plans to paint more houses in the areas hardest hit by the foreclosure crisis in Amani, Metcalfe Park, Sherman Park, Washington Park and Thurston Woods, and community clean-up events will be held in conjunction with one of the artistic board-ups in each neighborhood.