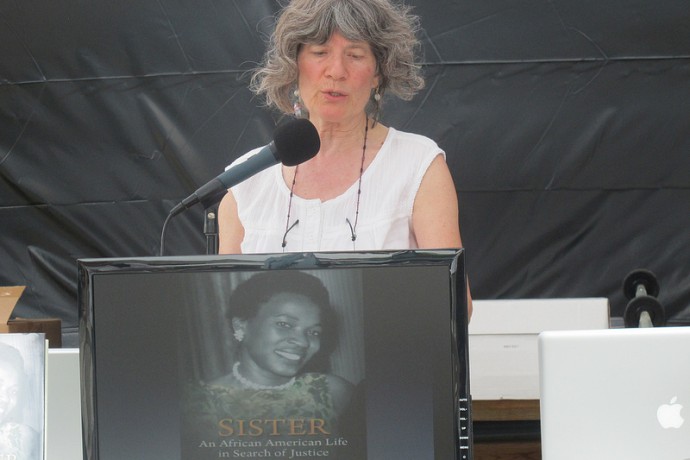 Sylvia Bell White remembers her first Monday morning in Milwaukee after moving back from Louisiana as a teenager. It was 1947 and she was looking for a job. She planned to seek work at a nearby bakery, only to learn that the business didn’t hire blacks. “Here I’m up north now — I was almost ready to about-face and go back then — I’m up north, and I couldn’t even work at Jaeger’s Bakery!” White exclaimed in an audio clip.

“In a sense, Sylvia is representative of many other African-American women who grew up in the segregated south, migrated north, and faced similar situations,” said Jody LePage. LePage co-authored her first book, “Sister: An African American Life in Search of Justice,” with White, a former Fondy Food Market vendor.

Fondy recently paid tribute to White during its annual Haymarket Days, celebrating 96 years of providing fresh local produce to the community. Children enjoyed a petting zoo, cabbage bowling and face painting, while on the other side of the market, LePage gave an hour-long preview of the book that examines White’s life, from her 1930 birth in Milwaukee, to her days as a soul food vendor, to her struggles as a black woman in an era of racial tension and segregation.

The presentation was filled with audio clips from interviews LePage had done with White, who grew up on her father’s farm as the only girl out of 13 children. 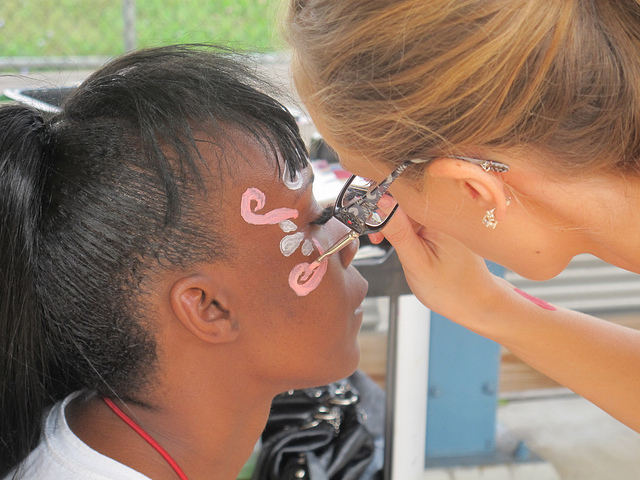 A girl has her face painted at Fondy Food Market. (Photo by Shakara Robinson)

After her brother, Daniel Bell, was killed by police in 1958, White became a civil rights activist, seeking justice for his death.

“[He was] gunned down the day after Sylvia and her brothers had thrown a party for Dan’s 22nd birthday,” LePage told a small group of people who gathered to hear her speak. Bell was pulled over for a burned-out taillight, and tried to run, LePage said. “The officer caught up to Dan, stuck the gun in his back and pulled the trigger. The officers fabricated a story to cover it up and an officer planted a knife on Dan’s body. That’s where the book begins.”

Bell had been driving without a license because he was illiterate, and couldn’t pass the written driver’s test, White said in the book.

According to the Milwaukee Journal Sentinel, an inquest was held on Valentine’s Day 1958, less than two weeks after Bell’s death. A man who lived across the street said he saw Bell’s hands in the snow, and he was not holding a knife. His family was not allowed to testify that Bell was left-handed, according to the article. An inquest conducted before an all-white jury cleared the officers, Thomas Grady and Louis Krause, of wrongdoing.

But in 1979, Krause came forward with the truth about the shooting, stating that Grady used racial slurs before and after pulling the trigger, LePage said. Grady pleaded guilty to reckless homicide and perjury. Although he continued to claim the shooting was an accident, he admitted planting the knife, the Journal Sentinel reported. A federal jury found in the Bells’ favor, and the family received about $1.6 million.

LePage described “Sister,” a 15-year project, as a narrative and thumbnail of African-American history, which includes details surrounding the Daniel Bell case, White’s family, and her efforts to fight back against racial discrimination.

A slideshow featured photos of White’s childhood Louisiana home, her siblings and father, as well as White kneeling at her brother’s grave.

LePage said she felt some pressure writing the book because she and White are close friends. White met LePage at a Farmers Market in Madison in 1973, where both were selling vegetables.

“I would go to see Sylvia in Madison every Saturday until she started coming to Milwaukee,” LePage recalled. White was a vendor at the historic Center Street Market before Fondy Food Center opened the market at its current location on 22nd and Fond du Lac Avenue.

“It was here that I found her again in 1980,” said LePage. Seven years later, White had a request for her.

“We had been talking about a play that had been done about the Daniel Bell case,” LePage recalled. “She just asked me, — we were right here (at Fondy Food Market), ‘Would you help me write my life story?’”

Young Kim, executive director of Fondy Food Center, remembers White from his start at the market in 2003. “She had a little bit of everything and a line of loyal customers,” Kim said. “This is history, and history is reflected in our food.”

Nancy Ketchman, director of development and communications for Fondy Food Center, said White represents what the market has worked to achieve for the past 96 years.

“Haymarket Days not only celebrates us being here, but also celebrates the farmers,” Ketchman said. “Sylvia Bell White was not only a farmer, but a civil rights activist, and fought hard in fighting for justice for the murder of her brother.”