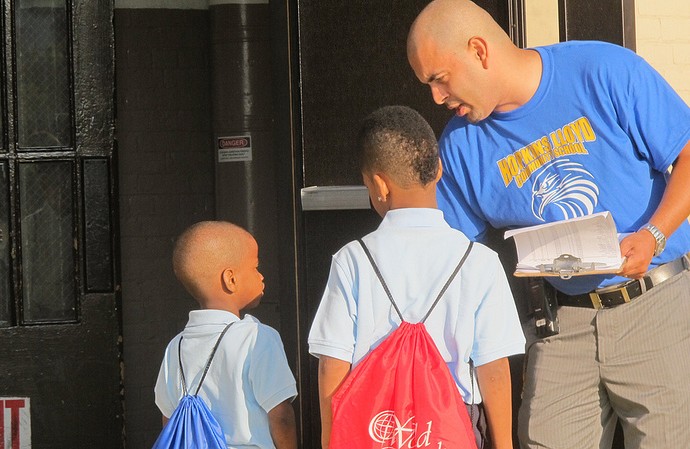 Students enter Hopkins-Lloyd on the first day of school in 2012. (Photo by Kenya Evans)

Milwaukee Public Schools and districts across Wisconsin are supporting bills to begin their school year before Sept. 1, pitting the powerful tourism industry against school administrators who want to give students more time to prepare for state and national tests.

The current law, enacted in 2002, prohibits public school districts from starting classes before Sept. 1. The Department of Public Instruction can approve a school board’s request to start before the date only if it demonstrates “extraordinary reasons.”

The new legislation, Assembly Bill 267, and its companion, Senate Bill 228, proposed by state Rep. Jim Ott (R-Mequon) and Sen. Alberta Darling (R-River Hills) respectively, would eliminate the prohibition and restore a school board’s power to decide its own start date. If passed, the law would go into effect beginning the 2014-15 school year 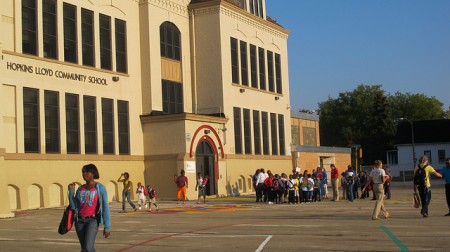 “I have yet to hear from anyone associated with schools, whether administrators or board members, say that giving control over the start date back to local boards is not a good thing,” Ott said.

The new legislation has received a warm welcome in Milwaukee. MPS spokesman Tony Tagliavia said as the district looks to improve student achievement, it believes start dates should not be determined by a sweeping state mandate.

“Local control over setting school start dates is something we have pushed for in the legislature and we are grateful that lawmakers are taking a look at this issue,” Tagliavia stated in an email

State Sen. Lena Taylor co-sponsored the bills. Eric Peterson, Taylor’s chief of staff, said the start date restriction has been a “long-burning fuse” for school officials, who have repeatedly tried to repeal it

State lawmakers from both parties have tried twice before to lift the start date restriction, but both times the legislation failed to reach the floor for a vote. The Assembly bill is in the transportation committee, and the Senate bill is being reviewed by the tourism committee, where it has died in the past

Because of the bipartisan support, Peterson thinks the third time’s a charm. Ott isn’t as optimistic.

“I’d say the chances of the bills passing are not real high,” Ott said, adding that at the very least, he hopes the legislation will get a public hearing.

The Tourism Federation of Wisconsin, a lobbying coalition for the state’s tourism industry, said in a memo that in 2012 visitors spent $3.3 billion between July and September, which is $600 million more than they did between April and June.

“Removing the Sept. 1 school start date would clearly lead to less revenue for Wisconsin businesses during this peak season and less income for employees at a time when the economy is still recovering,” the memo states.

School administrators across the state say that many students involved in sports are already on campus in mid-August, and the mandatory September start date challenges districts to squeeze in 180 days of instruction into the academic calendar.

But maybe most importantly, an earlier start date allows students more time in the classroom before state and national exams in October. The Department of Public Instruction, which supports the new bills, had no data that shows a correlation, one way or the other, between school start dates and student performance.

Joe Quick, a government relations specialist for the Wisconsin Association of School Boards, said support for the bill will likely differ in tourist and non-tourist areas, and restoring local control at the individual school board level is important.

“It’s important that the decision is made locally to reflect what the interests and needs are of the local community. Saying every district must start after Sept. 1, there’s just no rhyme or reason to it,” Quick said.

Across Wisconsin, 17 school districts — some of which are individual charter schools, and all of which are located in Milwaukee County — won state approval to have one or more schools start early last school year, according to DPI records.

Before 2002, the vast majority of Wisconsin’s school districts started classes in August. DPI records show that fewer than 15 percent of districts chose to start classes in September for the 2001 academic year.

Most MPS students started school this year on Sept. 3. In 2001, the year before the law changed, classes commenced on Aug. 23.