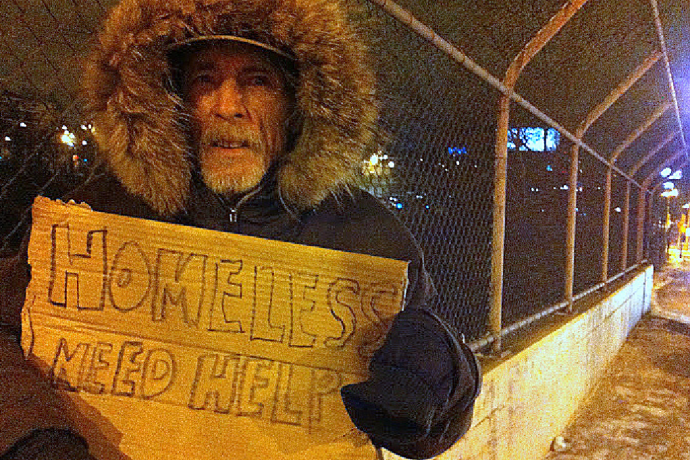 As Milwaukee County Executive Chris Abele prepares to release his 2014 budget proposal, representatives from Milwaukee’s homeless shelters are pleading for additional funding to their organizations as they face drastic cuts in federal funding.

The Shelter Task Force emphasized what it’s calling a growing crisis last week during the county’s Health and Human Needs committee meeting. Task force members told county supervisors that Milwaukee has been hit with $585,000 in cuts in core federal funding for the city’s emergency shelter services and a $500,000 cut in Housing and Urban Development funds. More cuts could be on the way as a result of the sequestration.

“This is the single most dramatic level of cuts in quite some time,” said Tim Baack, vice president of Pathfinders and chair of the Shelter Task Force.

The cuts are forcing local shelters to scale back services or eliminate them completely. The shrinking funds come at a vulnerable time as the number of Milwaukee’s homeless is growing. Calls for emergency shelter have gone up 95 percent since 2007, Baack said.

Milwaukee Continuum of Care conducts a bi-annual homeless count to help illuminate the largely invisible problem. A count in July, during which dozens of volunteers conducted surveys by hitting the streets and visiting local shelters, put the number at 1,500. But homeless advocates estimate the actual number is likely about 3,000.

A 2011 report found that African Americans suffer the highest rates of homelessness. One in four is a veteran and roughly one in three has some college experience. The 2011 report also states that 170 families were without a permanent place to live and the number of homeless Milwaukee Public Schools students was approximately 2,000.

The county budget process will likely continue until mid-November.

Conway said Abele has budgeted $400,000 to create 40 scattered-site permanent supportive housing units, which will cover services and a rental subsidy; and $100,000 towards housing and homeless prevention services for veterans.

County Supervisor Peggy Romo West, who has volunteered in the homeless counts, said county funding to address homelessness hasn’t increased in a dozen years and she plans to amend the budget to provide more aid.

“Given that we haven’t seen increased funding in 12 years, it wouldn’t be completely outrageous to ask for an increase,” Romo West said. “But once it gets to budget time, you’re competing with everything else.”

The amount Romo West proposes will be contingent on Abele’s budget proposal, which is expected Thursday, and after a final update on federal funding. Depending on those outcomes, she said she’s prepared to request an additional $200,000 to $600,000.

When the County Board meets Thursday, supervisors will likely discuss the Shelter Task Force’s report, and Romo West hopes to find allies for increased funding.

“Unfortunately I feel like when it comes to homelessness, we’re very dismissive of it, like somehow [the homeless] have created that situation for themselves,” she said.

“And that’s almost never the case. If you look at a working-class district like mine, there are many people who are one paycheck away from being homeless.”