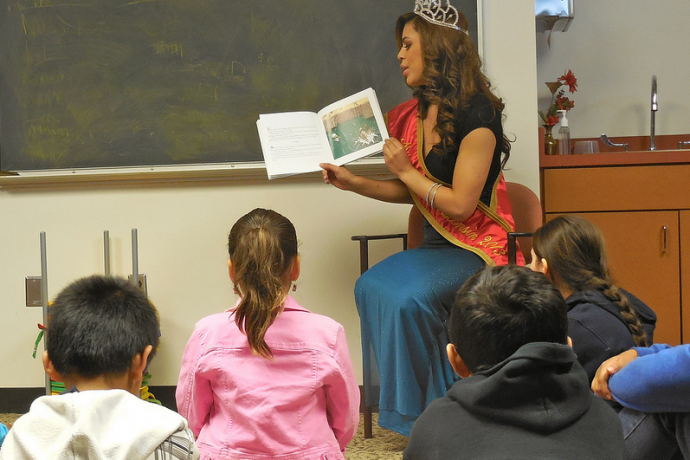 Wearing a tiara and a warm smile, Miss Latina Wisconsin 2013 watched as a young girl flipped through the pages of a magazine before settling on a photo of a pink stuffed animal. Equipped with scissors and a glue stick, she cut out the ladybug, adding it to a collage that included a piñata and cupcakes — some of her favorite things.

Other children drew pictures of basketballs and ice-cream cones to illustrate their favorite sports and foods. The collages allowed the children to express their individuality, which helps build confidence. “There’s a lot of bullying going on right now and kids feel insecure,” Alvarez pointed out. 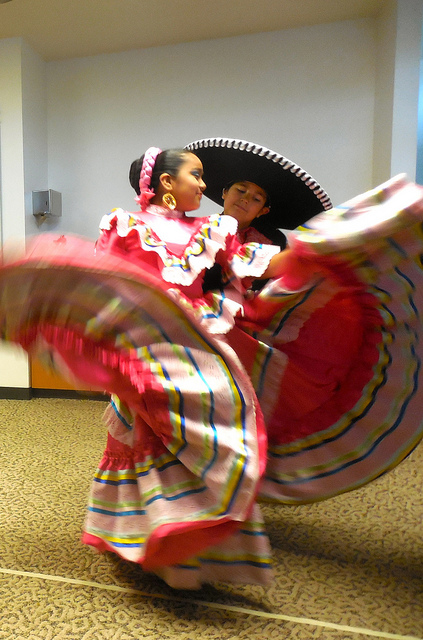 Members of the Dance Academy of Mexico perform a traditional dance from the state of Jalisco, Mexico. (Photo by Maria Corpus)

The library has celebrated National Hispanic Heritage Month, which runs from Sept. 15 to Oct. 15, with smaller programs in previous years. This year there was a larger kick-off event. About two dozen children and adults listened as Tania Alvarez, Miss Latina Wisconsin 2013, read the story “El Patito Feo/The Ugly Duckling” in Spanish and English. More than 50 people attended the dance performance.

Sept. 15 is significant because it is the anniversary of independence for Costa Rica, El Salvador, Guatemala, Honduras and Nicaragua. Mexico celebrates its independence on Sept. 16, and Chile on Sept.18.

The celebration began with a story read by Katie Kison, who works with the Ready to Read with Books2Go library outreach program. Children sang songs in Spanish, snacked on churros and learned about empanadas (a traditional stuffed pastry).

Story time and other activities bring patrons such as Norma Mercado into the Forest Home Library. A regular visitor, Mercado finds the library comfortable and the activities good for her children. “The children distract themselves from the television and Xbox at home,” said Mercado.

The event concluded with a performance by members of the Dance Academy of Mexico. Dressed in traditional garments, they performed four different styles of dance specific to the Mexican states of Guerrero, Chiapas, Tabasco and Jalisco.

For Jim Croft, who owns the dance academy with his wife, Marina, the dances foster honor and pride, especially during National Hispanic Heritage Month.

One of 13 libraries in the Milwaukee Public Library system, Forest Home provides services to an average of 400 patrons a day, according to Library Manager Dave Sikora.

Jennifer Hron, children’s librarian at Forest Home, said the activities and services at the library help patrons make the connection that the library is a fun place.