If you see a man riding around Layton Boulevard West on what appears to be a vendor cart on wheels, you might think that he’s selling food. But actually, Jorian Giorno isn’t selling anything. In fact, he’s fixing bicycles for free, and the children following him around are learning to do the same thing.

Layton Boulevard West Neighbors (LBWN) started the bike hub earlier this year to provide a service and encourage more physical activity in the neighborhoods of Silver City, Burnham Park and Layton Park. Giorno, coordinator of the project, said it took an unexpected turn when kids started showing up to help. 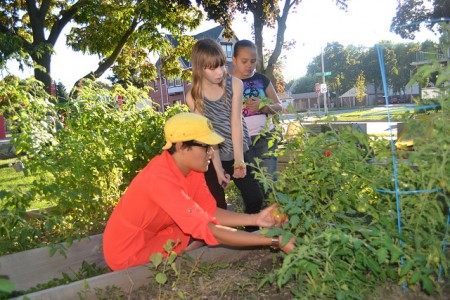 Giorno said it takes 10 minutes to patch a bicycle tire. “It’s time consuming, and so to have those extra hands there doing that, and actually liking it; that was really cool.”

It took the kids only a day or two to learn to patch a tire, Giorno observed. He gave six patches, glue and sandpaper to some of them so they could help repair bikes for people they know in their neighborhoods.

“They would come back telling me stories about fixing their friends’ bikes and making a little money off of it. So it was entrepreneurial for the kids as well,” Giorno noted.

“At this point in the year as we’re closing, we are selecting at least four of the kids that were helping out over the summer for next year,” said Jezamil Vega-Skeels, a neighborhood planner at LBWN. “We saw potential in them… and we will be training them over the winter,” Vega-Skeels added. “Next summer they will be able to assist Jorian at a higher level.”

LBWN also has been looking at how to tap into some of the students in the area who need community service hours to meet school requirements and are interested in hands-on experience fixing bikes, according to Giorno.

The hub repaired more than 250 bicycles since it started this spring. Giorno moved to a new site every two weeks, offering bike repairs Wednesday through Friday. His whereabouts were available on the bike hub’s website.

Most people heard about the hub through word of mouth. “In our neighborhoods, that’s how things are still communicated most effectively,” Jorian said. “All of our technology is great, but to actually get … people interested, I think people have to actually see it and come meet me.”

Vega-Skeels said Giorno is great with kids and the community. “I think this guy has just done an amazing job. I love to visit the site and just see that connection,” said Vega-Skeels, who lives in the area and bikes to the sites. “He remembers almost every name. You notice it, and parents love that.”

LBWN is planning a closing event on Oct. 23 for everyone who used the hub. Kids who shadowed Giorno this year will receive awards.

Vega-Skeels said other neighborhoods have taken an interest. “I think the feedback and the people’s acceptance of the program has been so amazing. I wouldn’t be surprised if next summer you see the hub in another neighborhood.”