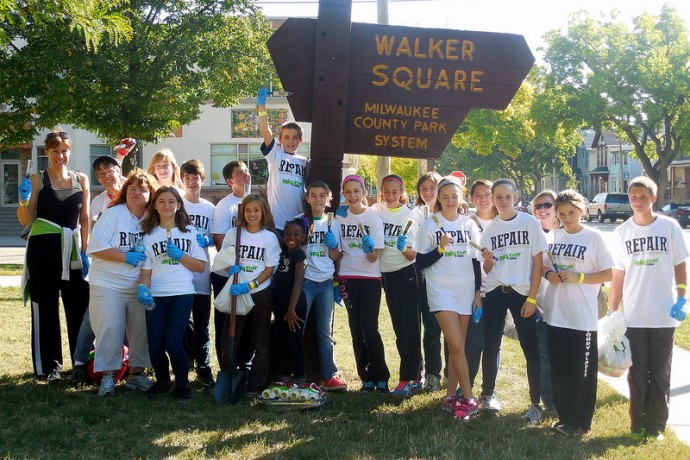 Harvester and her family were among the many community members who volunteered for the Big Day of Serving after stumbling upon the event at Clarke Square Park. “I think it’s good to get the neighbors to come together to clean up the neighborhood,” she said.

This was the first year Milwaukee participated in the Big Day of Serving, a national movement to bring youth together to serve. Group Mission Trips, a national Christian organization, and the Clarke Square Neighborhood Initiative collaborated to encourage local organizations such as BASICS, Journey House, Urban Heart Ministries and others to attend the event. 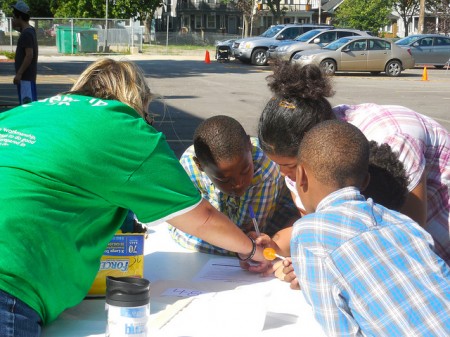 A volunteer helps Denischa Harvester and her family register for the Big Day of Serving. (Photo by Maria Corpus)

According to Pam Kortendick, co-community director for the event, more than 400 participants from local and out-of-state youth groups, along with neighborhood residents, worked on projects that included painting porches, cleaning vacant lots and renovating parks. Groups came from as far way as Appleton, Wis., Iowa and Illinois.

Neighborhood beautification is one of nine key strategies in the Zilber Neighborhood Initiative Clarke Square Quality of Life Plan.

Georgia Berceau, middle school coordinator at First Congregational United Church in Appleton made the trip to Milwaukee with 15 students and four adults.  The group painted a building and picnic tables at Walker Square Park. Berceau said she wanted her students to understand that doing something that may seem small can have a large effect on people.

“For us, [the Big Day of Serving] is about creating opportunities to build relationships so that the people in this neighborhood can begin to talk about advocating for themselves,” Candelaria said.

Faith Builders Urban Heart community team cleans and provides services to neighborhood residents on the South Side of Milwaukee every Saturday. Richard Schwoegler, director of the team, said he has seen an increase in participation from Clarke Square residents over time. “It’s a slow process but you’ve got to build trust. They have to know that we’re not going to go away. They have to know that we are going to help them,” said Schwoegler.

Tyna Rule, president of the Clarke Square Neighborhood Initiative Council, said she was amazed by the compassion shown by neighbors, residents and volunteers. “I hope that [participants] take the message of unity and ‘helping thy neighbor’ and allow this to be the beginning,” she added.