You are here: Home / News / Arts and Recreation / Volunteers clean up KK River in advance of trail grand opening
Share this... 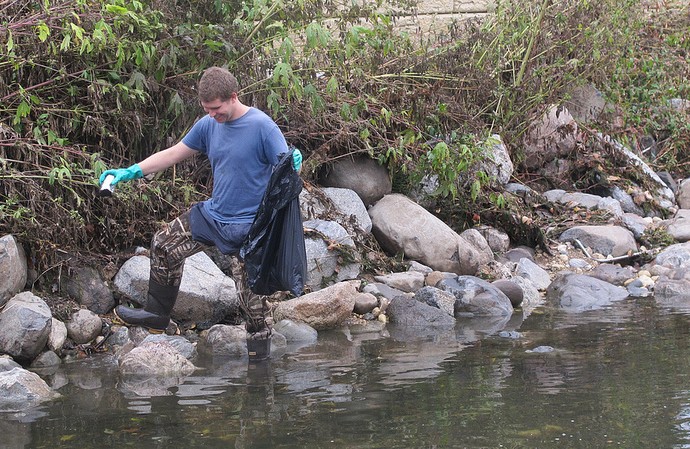 Jerry Zaren lays out the 25-pound salmon he and his buddies reeled in Saturday morning from the Kinnickinnic River near the Sixth Street bridge. Zaren, 46, doesn’t plan to eat the fish because he fears it’s not safe. Nevertheless, he said, “The river is a lot better now than when I was a kid, I can tell you that.”

The Milwaukee Metropolitan Sewerage District launched the River Rehabilitation and Flood Control Project in 2008 to help revive the river. The plan calls for removing more of the concrete-lined channels, installing natural landscaping and demolishing 82 houses that are susceptible to flooding. More than 40 houses already have been demolished.

The physical and ecological transformation is in part a product of partnerships between river and public health advocacy groups with governmental agencies, which have begun a series of projects to control flooding and rehabilitate the river, called the KK River for short.

The health center, along with Milwaukee Riverkeeper, hosted the biannual river cleanup near the Sixth Street bridge. 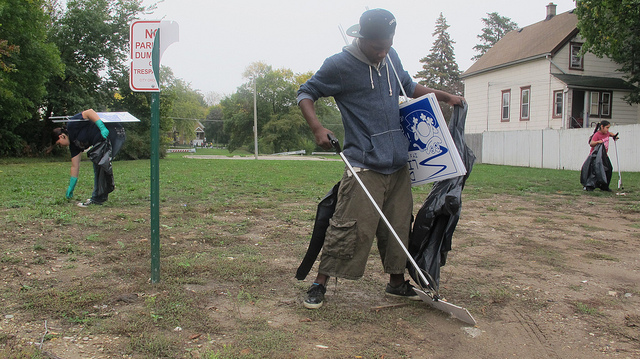 Volunteers work to clean up the Kinnickinnic River. (Photo by Scottie Lee Meyers)

A look to the west shows a concrete-lined channel that stretches for thousands of feet and is marred by graffiti. The channel was installed in the 1950s to reduce flood risk and slow water flows. The water moves as if on a conveyor belt and a dark tint of algae is easily visible in the low-water level.

To the east, the concrete slabs have been removed and large rocks line the riverbank, some causing small caps of whitewater. Native plants sprout through the rock banks serving as a vegetative buffer, which is reinforced by the natural landscaping that sits above the bank, tiered like a rice field. Those who fish cast their lines east of the bridge.

More than 50 volunteers, including State Representative JoCasta Zamarripa, strolled the streets and waded the river to pick up trash that might have otherwise found its way into the waterway.

It didn’t take long for Angel Suarez, a freshman at nearby Escuela Verde, to fill up his first garbage bag with plastic soda bottles, deteriorated signs and broken glass. During the school week, he exercises along the river during the school’s morning wellness program.

“I try to help out whenever I can because the litter adds up quickly. Anytime we can do something for the neighborhood it’s nice,” Suarez said as he posted a sign with an anti-littering message written in English and Spanish into a lawn.

Like many other rivers in major cities with rich industrial histories, the KK River was a victim of economics winning out over ecology.

“Manufacturing companies like those that line the Menomonee Valley considered the river as their dumping ground,” said Demaris Kenwood, the interim administrator for Friends of Milwaukee’s Rivers.

The KK River is the smallest of the three rivers that flow into the Milwaukee harbor, running approximately 9.5 miles. Roughly 200,000 people live in the KK River watershed, making it the most densely populated in the region, according to the state’s Department of Natural Resources.

A large portion of the river’s watershed is within the MMSD combined sanitary and storm-water-runoff pipe system. MMSD has 26 points where the overflow discharges to the streams in the Kinnickinnic River watershed, according to a 2011 report by the Milwaukee Estuary Area of Concern Stakeholder Group.

Milwaukee Riverkeeper conducts regular tests at 50 sites throughout the Milwaukee water basin. In 2011, the most recent report available, the KK River scored a D-, meaning, “few water quality indicators meet desired targets, or only meet water quality targets 60-69% of the time.” According to the report, “Bacteria levels were off the charts.”

The revitalization project has run into problems. MMSD officials fired two companies and banned a subcontractor from future projects after it was discovered that they were exposing the river to asbestos during demolition work.

A grand opening celebration for the Kinnickinnic River Trail is scheduled for Saturday, Oct. 12, from 1:30 to 4 p.m. at the southwest end of the bridge at Chase and Rosedale avenues.