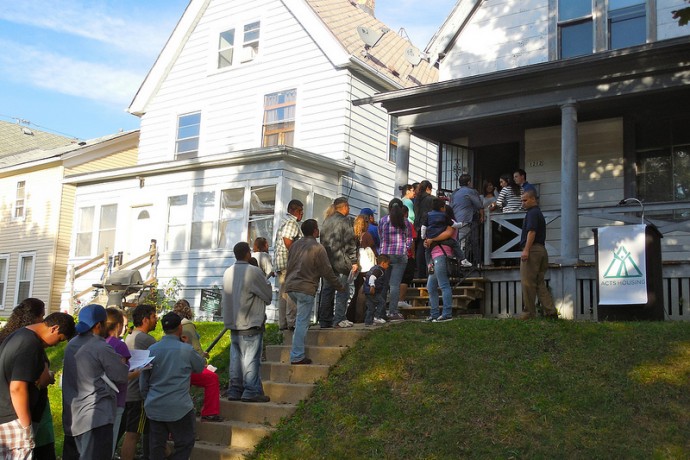 Families line up outside 1212 S. 26th St. to take a tour of the three-bedroom house.

“4-5-0-4-2-0,” called out Carl Quindel, executive director of ACTS Housing, as more than 200 people anxiously checked to see whether they had the raffle ticket that would give them the first chance to purchase a house in Clarke Square for $3,500.

Schulz said she was in shock when she heard her number called, but is “looking forward to the possibility of owning a home.”

Like many of the participants, Schulz saw the raffle as a good opportunity for her family. She currently rents a home that she shares with her daughters Anna, 8, and Ari, 10. The building is going into foreclosure and she anticipates needing to move out early next year. “[I’ve] been kind of looking around, trying to [weigh] my options and this came up,” she said. 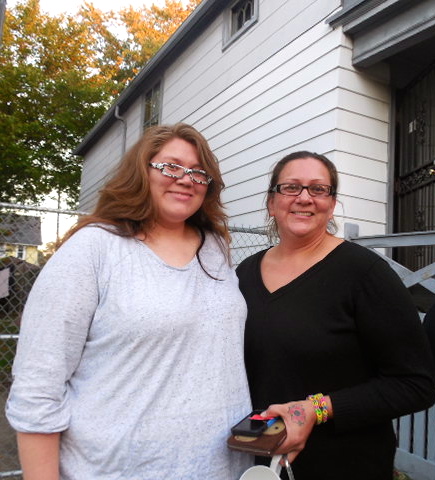 Bridgette Schulz (right) won the raffle and is the first in line to purchase the home. She attended the event with her daughter, Alexandria Goetzke.

To be eligible, the raffle winner must be a first-time buyer, be able to purchase the house within three days, agree to rehabilitate it, and occupy the property for five years, according to ACTS Housing Specialist Hilaria Rios.

Schulz, who works at the church across from the house, said she is up to the challenge. “I can do a lot of the stuff, plus I have people from church that are willing to help,” she added.

Dulce Pulido, 21, attended the event with two family members. As a first-time participant, Pulido saw the raffle as a way “to start my own little family.” Pulido is fifth in line to purchase the house on S. 26th St. She plans to attend future home sale events.

Bibiana Cordova liked the house better than others she has seen. Cordova, a single mother, has attended similar events in the last two years with her daughters Jaqueline, 6, and Jasmine, 10. The chance to purchase a home at such a low cost means a lot to Cordova. “It’s not easy to rent,” she added.

Monica Corona Gonzalez, who participated in a raffle once before, said she hoped to win the opportunity to buy the home for her husband, son and daughter. “We’ll keep trying to one day win a house,” Gonzalez said.

Alderman Bob Donovan, who attended the event, said, “There are many positive things going on right here in the Clarke Square neighborhood and one of those positive things is the ACTS Housing Initiative.”

Representatives from US Bank, the Zilber Family Foundation, Associated Bank, Clarke Square Neighborhood Initiative and others were present at the event.

Since 1992, ACTS Housing has worked to promote affordable homeownership. Last year, the organization sold 155 homes, 39 of which were city of Milwaukee tax foreclosures, according to Quindel.