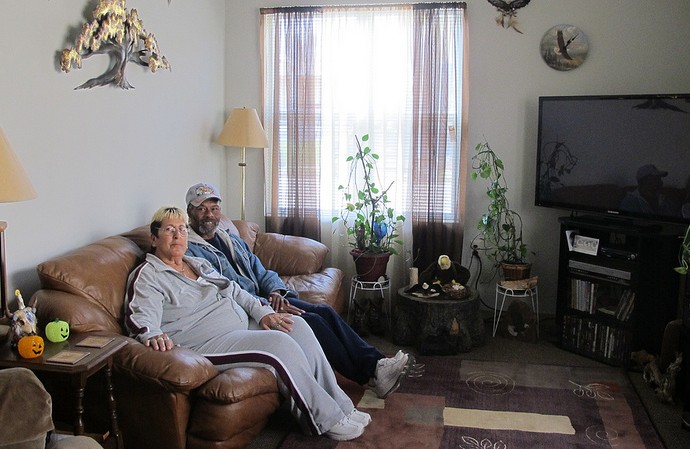 For 19 years, Charlie and Jill Harris rented the bottom level of a duplex along North Avenue on the North Side. The married couple barely tolerated an insufferable property owner, a “slumlord,” they say, who neglected repairs to a point that challenged Jill’s ability to manage her degenerative disc disease

“We deserve something better than this,” Jill would tell her husband. But rent was an affordable $535 a month, and so they stayed.

And then one day last year, the two saw a “for rent” sign on a new, modern-designed townhome near Center Street and Dr. Martin Luther King Jr. Drive. With their low income and medical bills, they didn’t expect to be able to afford any place with a fresh coat of paint, much less a fleet of energy-efficient appliances. Thinking they had nothing to lose, they called the number. It wasn’t just a person who answered; it was a prayer, too.

For five months now, the Harris’ and Little Man, their overly protective black chihuahua, have been living in one of those new townhomes for $575 a month. To Jill’s relief, the home came with a wheelchair ramp, a wide entrance, handrails, low-level kitchen counters and sinks, and a doorless shower.

And then there’s Don Laubach, their property manager, who just stopped by to give Jill a box of chocolates and a “get well soon” card after he found out that she would soon undergo radiation treatments for cancer.

“I love it here. Our lives are so much better,” Jill said. 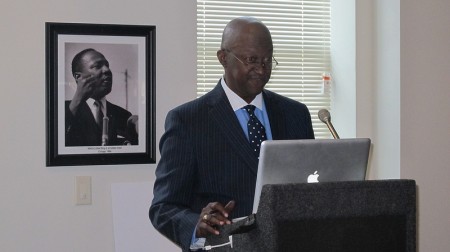 Developer Welford Sanders is the driving force behind King Commons.

The Harris’ newfound happiness is largely thanks to a powerhouse team of development investors, co-led by Martin Luther King Economic Development Corp. (MLKEDC) and Impact Seven.

The development marks the completion of the $10 million fourth phase and includes 41 rent-to-own housing units on scattered sites in the Harambee neighborhood. The latest phase of units consist of four single-family homes, six apartments, 10 duplexes and 21 townhomes.

“You need quality housing and thriving locally owned businesses to grow a community, and these new units and commercial space along King Drive and Center Street are some of the best available in the whole city—not just this neighborhood.” said Welford Sanders, executive director of MLKEDC. Since 2005, Sanders has helped pour more than $200 million into development projects along MLK Drive.

“Every major city in the country has a Martin Luther King Drive or boulevard,” said Wyman Winston, executive director of Wisconsin Housing and Economic Development Authority. “We all know them as the ghetto boulevards. They look horrible and do not exemplify what should be an example of the best of us as Americans.

“The work that the city has done and its focus on this street with various partners, project by project, commons by commons, is transforming this corridor for the people who live here,” Winston added.

Part of that transformation is on full display next door at Growing Power Deli and Food Market. Growing Power was developed in the third phase of the project, along with apartments and townhomes available to families making no more than 40 to 60 percent of the county median income.

“In the past, this street was littered with a lot of bars. These developments have meant a lot for the entire community,” Allen said.

Rachel Rhodes, vice president of National Equity Fund (NEF), an affordable housing investment group affiliated with Local Initiatives Support Corporation (LISC), said she watched the success of the previous phases from the sidelines. When Sanders, known by many as the “godfather” of King Drive, solicited funding from Rhodes and NEF, it was an offer she could not refuse.

“Credit officers get terrified when they hear the words scattered site, urban infill, historic rehab. They hide under their desks because it’s been done so badly in such public ways,” she said.

Rhodes said King Commons should serve as a blueprint for other inner-city neighborhoods.

“Now I get to say, ‘Look, it was done right and it’s phenomenal.’ A community is changing as a result. You have all these very public failures, but here’s a public success. This should be the map for how it should be done — not just in Milwaukee and Wisconsin, but throughout other Midwestern cities,” Rhodes said.