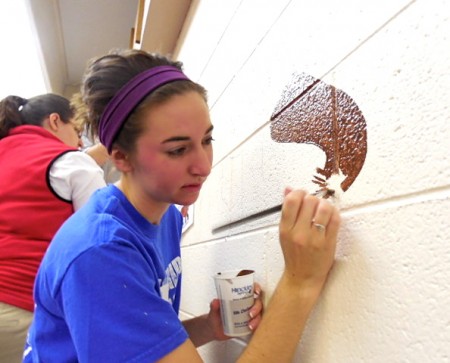 What began with two months of planning ended with a wish come true for Kanika A. Burks, principal of Gwen T. Jackson Early Childhood and Elementary School, as about 74 City Year Milwaukee corps members and more than 100 community volunteers crowded the hallways for Make a Difference Day.

Equipped with buckets of paint and other tools, corps members and volunteers painted images, quotations and number lines on the school’s walls.

“It’s awesome to see all of these people coming together for the benefit of our students,” Burks said.

“Jackson was identified as a school that is in one of the neighborhoods we work at…and the district indicated this would be a place that could use some beautification,” said Luke Fickbohm, development associate at City Year Milwaukee, explaining how the school was chosen.

Characters from “Clifford the Big Red Dog,” “The Very Hungry Caterpillar,” and “Three Little Pigs” were painted on some of the 50 murals created on the school’s walls. City Year corps members Emma Tucek and Amber Bloom said the iconic children’s book characters will help build culture and literacy at the school.

More than 10 college logos representing staff members’ alma maters were painted on the walls in a hallway of fourth and fifth grade classrooms. The logos are intended to inspire students to think about college. 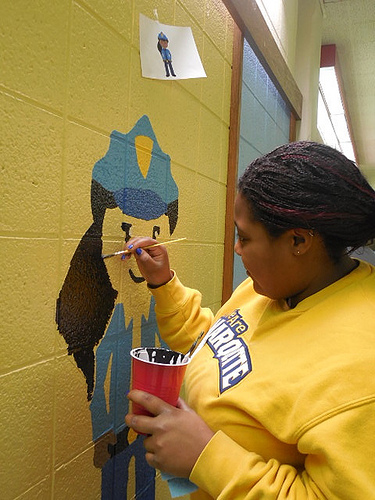 Sydney Lawrence, 19, paints a policewoman in the “hallway of professions,” which is meant to inspire students to think about their career goals. (Photo by Maria Corpus)

“These students absolutely have the potential to succeed and go to college and be successful, and we want them to start dreaming now,” said Jason Holton, executive director and vice president of City Year Milwaukee.

“I think it’s important to give back to the community and also to inspire kids to try to go beyond high school,” Lawrence said.

Other projects included constructing a mural bench and painting foursquare games on the playground’s blacktop.

A.J. MacDonald, who organized the project for City Year, was overcome with emotion and pride at the sight of the many volunteers and their hard work at Jackson school. “Projects like this [can’t be done] without every single one of those individuals making the choice to collaborate and work together,” MacDonald said tearfully.

City Year Milwaukee is an AmeriCorps program that engages 17- to 24-year-olds in a year of service at schools. The corps member work with eight Milwaukee public schools as tutors, mentors and role models, in addition to organizing three service projects a year such as Make a Difference Day.

Corps members visited the school the day before the event to create pencil sketches for the paintings and have lunch with students. Burks said the effect they had on her students was amazing to see.

“I can only imagine the impact that [corps members] have on buildings where they are there every single day,” she said.