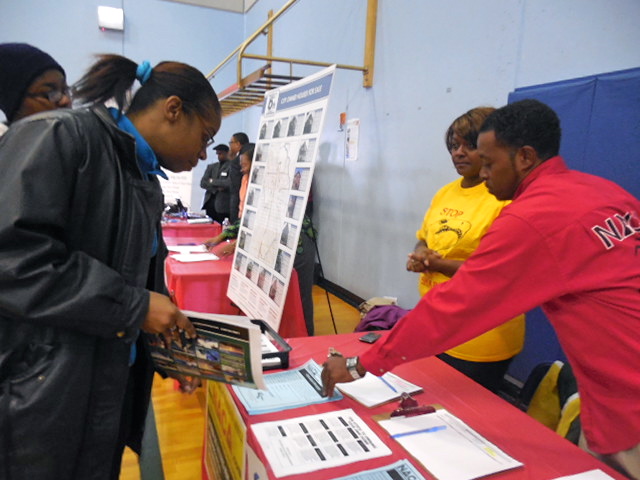 Stopping by table after table, Tanesha Howard, 34, gathers brochures, packets and fliers on homeownership from organizations participating in the fourth annual Housing Resource Fair. After years of renting and negative experiences with landlords facing foreclosure, Howard is looking to buy a house for herself and her five children. She brought three of them to the fair.

“My kids and I have ended up homeless several times because of someone else’s mishaps,” Howard said.

Representatives of about 25 organizations sat at tables lined up along the gymnasium walls of Robert M. LaFollette School for the fair. Organizations such as Milwaukee Habitat for Humanity, Walters Home Inspection, Neighborhood Assistance Corporation of America (NACA) and others provided information on home repair, home purchasing and foreclosure.

“It truly is about connecting the resources with the people,” 6th District Alderwoman Milele A. Coggs said. “What good are all these resources if people don’t know they exist or how to access them?” 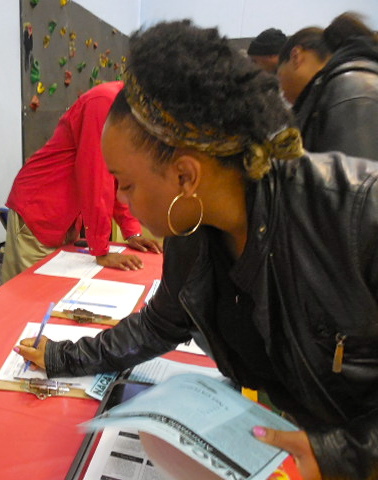 Tanesha Howard signs up to receive information from National Assistance Corporation of America, one of the many organizations at the resource fair. (Photo by Maria Corpus)

For Howard, the fair provided useful information on home purchasing and connected her with assistance programs. Organizations such as NACA answered her questions about purchasing and predatory lending, according to Howard. Now, she hopes to find the program that best fits her family’s needs.

“I just want [my children] to be stable and not have to go and worry about [whether they] have a home to go to,” Howard added.

Carisa Houston, 41, attended the fair with her daughter, Marisa Dixon, 16. As a homeowner, Houston has been cheated out of money from contractors in the past, she said. She attended the event in hopes of finding financing opportunities for home repair and connecting with reputable contractors.

Lolita Hegwood, 30, and fiancée Freddi Pattillo, 29, currently rent and hope to own a home soon. They intend to follow up with the organizations that provided useful information on homeownership.

“Since we are starting from the bottom this [fair] gives us some resources and support to get started,” Hegwood said.

Milwaukee Habitat for Humanity, a housing nonprofit, was on site to inform and advise prospective homebuyers.

“A lot of people in the realm of homeownership just don’t know where to start,” said Allison Kruschke of Milwaukee Habitat for Humanity. “It’s a very complicated process…so it’s really great that we have things like this [fair] to sort of simplify the process.”

Al Walters, owner of Walters Home Inspection, attended the event for the first time as a vendor. His business provides inspections for homebuyers. Walters commented that many who attended the fair were unaware of the home inspection process, which includes identifying potential fire hazards, health and safety risks such as asbestos, items that don’t function properly such as air conditioners and the overall condition of the home.

NACA, a nonprofit mortgage-counseling agency, informed attendees about the availability of below market-rate interest loans for low- and moderate-income people through Bank of America and CitiMortgage. Mortgage Consultant Tory Goodman said attendees were skeptical about the loans because there are no closing costs or down payments.

According to Coggs, Milwaukee is one of the cities hit hardest by foreclosures. “Although at times it feels as if things are improving, we have to be vigilant in turning things around and housing fairs [are] just one piece of that puzzle in improving the community,” she said.