You are here: Home / Home / Carousel / Marquette program talks to autistic teens ‘in their own language’
Share this... 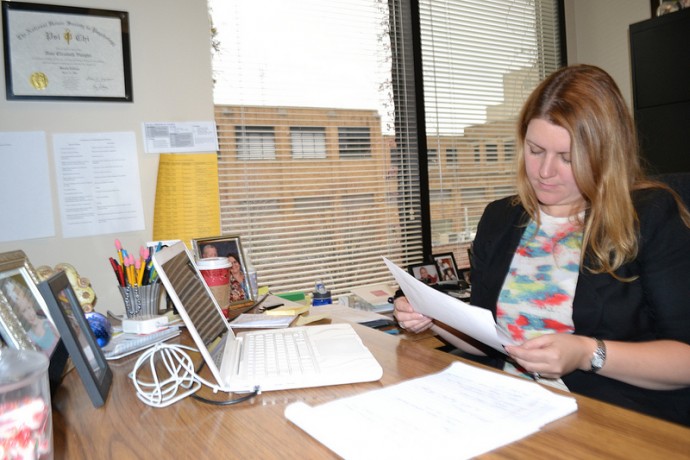 Developmental neuroscientist Dr. Amy Van Hecke measures electrical activity on the scalp to study the effect of the PEERS curriculum on individuals with Autism Spectrum Disorders. (Photo by Tom Momberg)

During the three years that the Program for the Education and Enrichment of Relational Skills (PEERS) has been operating at Marquette University, demand for its services has been high — so high that there is a two-year waiting list.

PEERS is the only intervention offered in the Midwest for higher-functioning teens and young adults with Autism Spectrum Disorders (ASD) such as Asperger syndrome. These disorders are marked by impaired social interaction and weak verbal and non-verbal communication, according to the American Psychological Association

Although the program is based in the city, few participants live there.

“We are trying … to get families that are in our own backyard,” said Dr. Amy Van Hecke, a developmental neuroscientist and University of Miami doctoral graduate. “But we haven’t been as successful in this as we would like.” 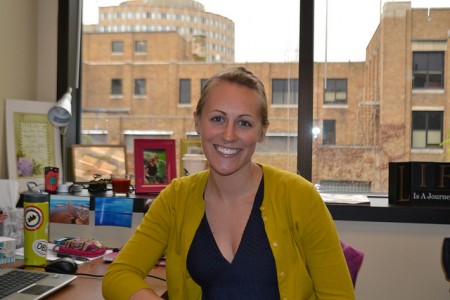 Kirsten Schohl is working on her Ph.D. in developmental psychology, an interest sparked early in her life. (Photo by Tom Momberg)

Van Hecke runs PEERS with the help of six graduate students. Undergraduate psychology students also coach the participants one on one during the group sessions.

Every week, the instructors teach participants, step by step, what to do in a social situation. For the teenage group, that might be inviting a friend to their home. For example, students would practice calling their friend on the phone, inviting him in, and moving away from the door so he can enter. The participants role-play a different situation every week and practice it at home. Parents are required to attend a weekly meeting so they can help their children through the concepts and report progress and problems to the instructors.

“People with autism really respond well to structure and to clear, concrete information. [PEERS] talks to individuals with autism in their own language,” Van Hecke said.

PEERS was developed at UCLA by Dr. Elizabeth Laugeson, founder and director of the UCLA PEERS Clinic. Most families find out about the treatment through the Autism Society.

Marquette’s Department of Psychology is one of the few providers of PEERS that is also researching its effectiveness. Researchers have found that PEERS improves social functioning.

Van Hecke and her students use EEG scans to study parts of the brain that correspond to social activity. These ‘light up’ more in social situations for individuals in PEERS compared to a control group. Participants are tested after six months to see whether they have retained the social skills.

Van Hecke’s team also evaluates how PEERS affects heart rate and social anxiety by using high-tech bracelets to measure sweat on the skin before and after each class. Typically, after they learn the steps to conduct themselves in social situations, they are less anxious.

Doctoral student Kirsten Schohl said symptoms of ASD can be seen in infants as young as 12- to 18-months old. However, it can be difficult for families to recognize symptoms of autism in teenagers. She noted that what families may perceive as behavioral problems might actually be symptoms, and often teachers will pick up on them once children reach school age.

Bridget Dolan, a graduate student who leads the teen PEERS, said that many participants come into the program without any friends, “and by the end of the group they have at least one friend.”

For people with ASD, having at least one friend can reduce depression and improve self-esteem, Dolan said. “These teens not only have a friend by the end of the program, but they are smiling and engaging in conversation. They are excited to interact with other people.”

“It’s so fun to teach because they are so willing to learn; they want social relationships,” Schohl said.” They want to know how to date, enter a conversation and how to deal with bullies. They don’t know how. It’s great to give them the tools that we think of as so basic.”

Schohl, who has a brother with autism, said her interest in psychology was sparked by a desire to help people like him. “I love how unique children with autism are,” she said.” I decided that I wanted to help them for the rest of my life.”