You are here: Home / Home / Carousel / Newly arrived refugees get a taste of Thanksgiving
Share this... 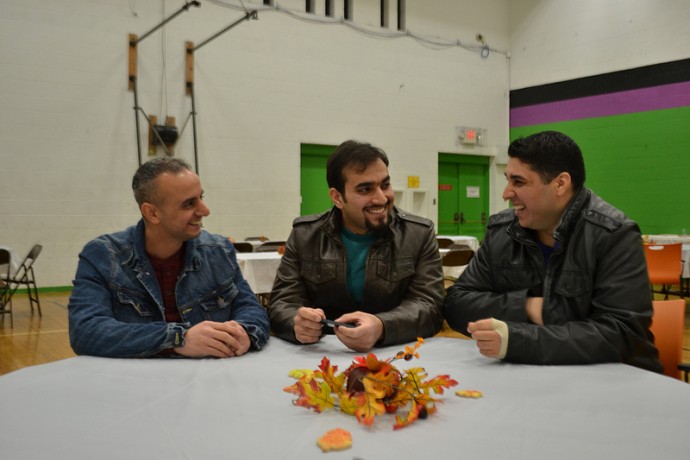 Mohammed Ezzat (left), and Iraqi refugee Anas Aldoori (center) talk to Ali Maikki (right), who came to Wisconsin as a refugee from Malatya, Turkey, in September. (Photo by Tom Momberg)

The menu looked like most traditional Thanksgiving dinners: roasted turkey, stuffing, ham, roast beef, vegetable and pasta salads, breads, cranberry sauce, pumpkin and apple pie, cookies. The difference was that many people in the room had never tasted some of these foods before.

The Milwaukee Area Refugee Consortium held its first refugee Thanksgiving potluck dinner at Ascension Lutheran Church last weekend, bringing a diverse group of refugees together from across southeastern Wisconsin. Church members and staff from the consortium’s agencies brought the traditional dishes to share.

The consortium is composed of five non-profit agencies under contract with the state Office of Refugee Resettlement to provide transportation, housing and social services to refugees and immigrants. Lutheran Social Services (LSS) has held a Thanksgiving event for refugees every year since the ’90s, but this year was the first time the agencies came together to host it.

About 200 people attended, half of whom are refugees, according to Natasa Torbica, the consortium coordinator. “People from other parts of the world learn a little bit about the tradition of Thanksgiving that we have in the United States,” said Ascension Pastor Jonathan Jacobs, adding that the celebration is a good way to bring together the refugee community in Milwaukee. 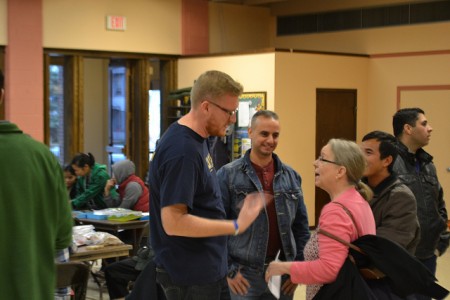 Jacobs said he likes to think of Ascension as a place where people new to the United States are welcome. The church holds services in three languages: English, Spanish and Hmong.

“You can imagine what it would be like if you were displaced… finding yourself in another part of the world,” said Jacobs. “Just to hang out with some other people that are in the same boat makes them feel welcome, and assures them that they’re not alone.”

Mohammed Ezzat, who came from Iraq in 2009, brought a group of refugees to the city from Madison for the event. He said he has become familiar with Thanksgiving during his time in the country, and thinks sharing it with Americans reflects the meaning of the holiday.

Ezzat recently was granted citizenship and works for LSS. He has learned English and now helps incoming refugee families. Part of his work is to make sure they are not isolated and to create a sense of community for them, he said. “I understand the needs of refugees when they first come in. I facilitate the process of their adjustment.”

Anas Aldoori, who relocated to Milwaukee from Baghdad in November 2012, said he was glad to come to the event to see people he knows and meet other refugees. A photographer in Iraq, he has been working at a job in shipping and receiving. Once he gets more acclimated, Aldoori said, he plans to study photography and return to his trade.

Volunteers from the girls’ basketball team at University School, 2100 W. Fairy Chasm Road, helped set up and decorate the dining room. Ben York, University School’s service learning coordinator, said he’s “trying to get the girls exposed to different parts of the community that they might not otherwise know.” York also has arranged community service projects for the students with Lutheran Social Services, usually helping newly arrived refugee families move into their homes.

“This Thanksgiving day is for (the refugees), because they help me understand how special the United States is… that we have a lot of freedom,” said Mary Flynn, LSS program supervisor. “I didn’t realize that until I started working with refugees.”