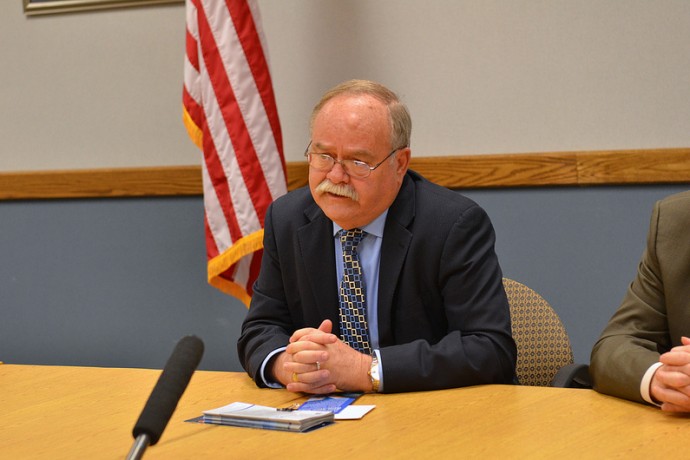 Percy Pitzer describes the work of his foundation. (Photo by Sue Vliet)

One prisoner at the Milwaukee County House of Corrections donated 33 cents — all he had in his commissary fund — to a new program to fund college scholarships for inmates’ children. In just a few hours Thursday afternoon inmates contributed $800.

The program, new to Wisconsin, is run by Creative Corrections Educational Foundation in cooperation with UWM’s Helen Bader School of Social Welfare. It started in spring 2012.

The foundation awarded its first 31 scholarships this year to students in Texas, New Mexico, Ohio and Wisconsin. Nine more are expected to be awarded before the new year. The funds were collected at more than 100 prisons in those states. 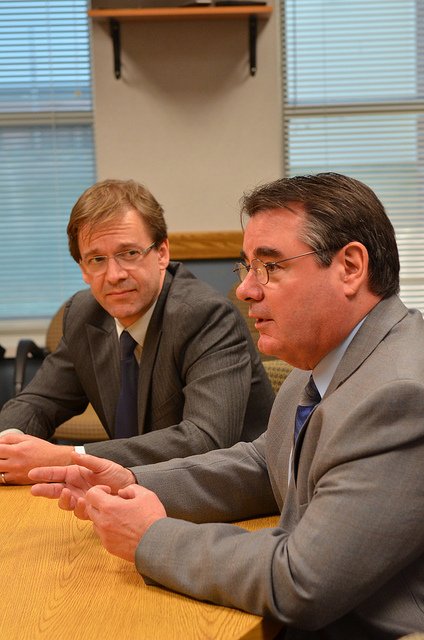 “I think these numbers will continue to grow,” Pitzer said, adding that most inmates are eager to contribute what little they can from their commissary funds.

Milwaukee County House of Correction hosted an event to introduce the scholarship program and to announce a $5,000 contribution by Dean Stan Stojkovic of the Helen Bader School. County Executive Chris Abele also personally donated $5,000. Stojkovic and Pitzer brought the program to Milwaukee County this month.

“The benefit is directly to the kids that have family members in the correctional system,” Stojkovic said. “I don’t think it will solve all the problems for these families, but I see it as an initial step.”

Fifty-two percent of state inmates and 63 percent of federal inmates reported having children under age 18 in 2007, according to the Bureau of Justice Statistics.

Stojkovic said his donation is to get the scholarship going in Wisconsin in its first year. He said he took an interest in the foundation because what it does is in line with the college’s mission of improving lives and strengthening communities.

“Saying that we need to help children of inmates is not an empirical claim, but a moral claim,” Stojkovic said. “It will help to break the cycle and it’s the right thing to do.”

According to the American Correctional Association, up to half of incarcerated juveniles have an incarcerated parent.

The foundation hopes other private contributions in Milwaukee will help grow the program and the funds available to Wisconsin students.

“I hope the general citizenry and business community attach onto this, I think it’s an interest that can resonate with anyone,” said Mike Hafemann, superintendent of the Milwaukee House of Corrections.

Pitzer is a retired warden for the Bureau of Prisons in Texas. He and his wife, Sununt Pitzer started the foundation with $150,000 of their own money. “My wife and I wanted to give back, so we picked the children of incarcerated parents as a project of ours,” Pitzer said.

In addition to helping inmates’ children, the program benefits the prisoners themselves.

“I see it first hand: contributing to the scholarship gives inmates a positive outlook on (their sentence), and gives them hope for their families’ success. By having this outlook, I think inmates are much less likely to commit a second offense,” Hafemann said.

The scholarship program is accepting applications. Wisconsin university and vocational school students with at least one incarcerated parent can apply through their school’s financial aid office.