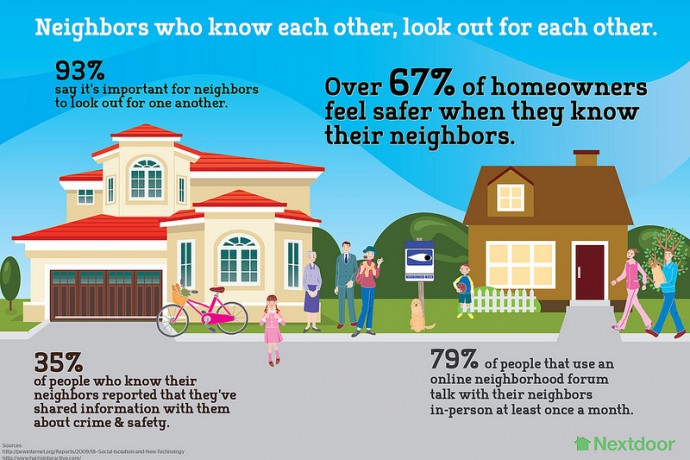 Only 2 percent of peoples’ Facebook friends are neighbors, according to a June 2011 survey by Pew Research. Though it sounds a little odd, maybe the best way to get to know your next-door neighbors is by joining a free social network called Nextdoor from a company of the same name.

“You have Facebook for your friends, Twitter for things that interest you, and LinkedIn for your professional life,” said Jen Burke, Nextdoor’s communications manager. “But you don’t have something that connects you with those who live right next to you. We wanted to fill that void in the social media space.”

The San Francisco-based company launched the site and smartphone app in 2011 and is now running in more than 23,000 neighborhoods in all 50 states. Burke said more than 115 Milwaukee neighborhoods are using Nextdoor, and the number is growing every week.

Nextdoor verifies users by address, uses each person’s real name and doesn’t allow people access to a network if they don’t actually live in the neighborhood. Anyone can start a Nextdoor account for a neighborhood, but it won’t activate until at least 10 people sign up. To help reach the threshold, the company offers to send 100 free invitations to area residents.

After verifying their addresses, users may submit posts regarding yard sales, request recommendations for services, inquire about lost pets and notify others of neighborhood crime and issues.

Troy Towers leads the Capitol Heights Nextdoor. He awoke recently to the yells of teenagers and squealing tires outside his house. One car was parked virtually on his front lawn. Disoriented and confused about what was happening, Towers posted an urgent alert to the neighborhood’s Nextdoor network. Residents quickly responded with information. By the time police arrived, Towers was able to describe the car thieves, identify where they were spotted, and show where they might be heading. The group of juveniles was apprehended soon after.

“The worst part about being a neighbor is not being sure of what’s going on around you. Nextdoor is like a newspaper. It’s kind of calming in that way,” he said.

Beyond reporting criminal activity, Towers said Nextdoor is making Capitol Heights a closer-knit community. He checks his account daily and often posts about friendly encounters with neighbors. People are starting to address each other by name.

“It’s not creepy. It’s refreshing. It’s nice. You know these are good people and good neighborhoods that care enough to understand you,” Towers said.

Christine Czarnecki leads the Enderis Park Nextdoor. She started it in October with a little more than a dozen residents and it’s grown to more than 100 people since then. She checks her Nextdoor account several times a day from her home computer and from her smartphone while at work.

As a member of the Enderis Park Neighborhood Association’s communication board, Czarnecki said the organization doesn’t like to share crime alerts on its Facebook page, fearing it will project the wrong image to potential homebuyers. But having a communication system among current residents has proved to be a great asset.

“A lot of people in the neighborhood want to know what’s going on. You don’t want to hear about it two weeks later,” she said.

Czarnecki credits Nextdoor for boosting attendance at recent public safety meetings, too. “Best of all, everyone can go online after the meeting and type their thoughts and continue the conversation,” she said.

Czarnecki said the only problem has been connecting the neighborhood’s elderly, many of whom don’t have computers or the skills required to sign up for Nextdoor online.