Three years ago, landlord Robert Heffernan was asked by a caseworker from the Office of Refugee Resettlement to rent a South Side apartment to a Burmese family. As he started getting to know the family, he “found that they were particularly isolated and couldn’t learn English. I thought that was wrong,” said Heffernan.

His efforts to help his new tenants led Heffernan to The Burmese Immigration Project (BIP), a volunteer-driven organization that works with refugee children on their homework and English. The program also tries to build a sense of community among refugee families and immerse them in American culture.

“When I have homework I like coming here because they help me do it. I don’t understand most of it so they help me figure it out,” said Messmer High School student Akeh Paw.

Paw, 14, came to the U.S. with her family in 2011. She said she is often confused when she’s in school even though she’s quiet and attentive, but the more she practices English, the easier her schoolwork becomes. “When I go to school I don’t talk a lot because I’m kind of shy, but I have a lot of friends and everyone at my school is very nice to me.” 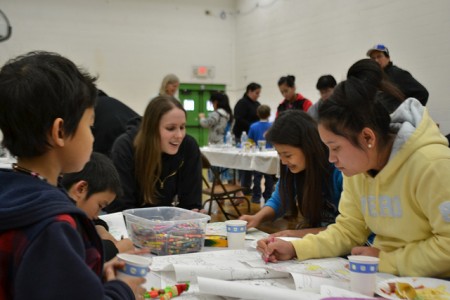 With the help of other volunteers, program coordinator Becca Schultz oversees twice-weekly tutoring and ESL programming for up to 50 children. BIP also arranges field trips to the zoo, the museum and Brewers games, and holds holiday parties for Easter, Halloween, Thanksgiving and Christmas that draw as many as 60 refugee families.

“That’s just a way of showing the kids the different things we do for fun…and give them an opportunity to experience childhood in the U.S.” Schultz said. “It’s really hard when your parents are non-English speakers and work really long shifts, so we show them what there is to do in Milwaukee.”

Most of the people the program serves are Karen, one of the ethnic groups that fled military and ethnic conflict in Burma (also known as Myanmar) to refugee camps in Thailand, then on to the U.S.

Ascension Lutheran Church has made free space available for BIP since 2011. The program receives donations of food and supplies from South Side churches and businesses, and has attracted more than three dozen volunteers, some of whom are Burmese.

Schultz said volunteers have a chance to learn about another culture as well as acquire multiple skills. “When I tell people about our program, I don’t just tell them it’s an academic tutoring program or an activity group. Rather, it’s a little bit of everything,” she said. “(Our volunteers) learn about social work, education, early childhood and communications.”

BIP received the “Inspire by Example” award from the Nonprofit Center of Milwaukee earlier this year for its volunteer efforts.

BIP holds tutoring and ESL programs at Ascension from 6:30-8:30 p.m. Tuesdays and from 2-4 p.m. Saturdays. Classes are held during summer vacation to continue introducing concepts American-born students may take for granted.

Heffernan and Schultz are working to arrange space at UW-Milwaukee for college students to tutor young Burmese students. “It will give them an idea of where they can go if they do well,” Heffernan noted.

Schultz said she’s become like a second mom for many of the children, even receiving cards on Mother’s Day.

“They always have smiles on their faces and want to hold my hand. I’ve seen a student tell a volunteer ‘I love you,’” she said. “It’s little moments like that when you realize that even if they don’t express it all the time, they really do appreciate their teachers and enjoy coming here.”