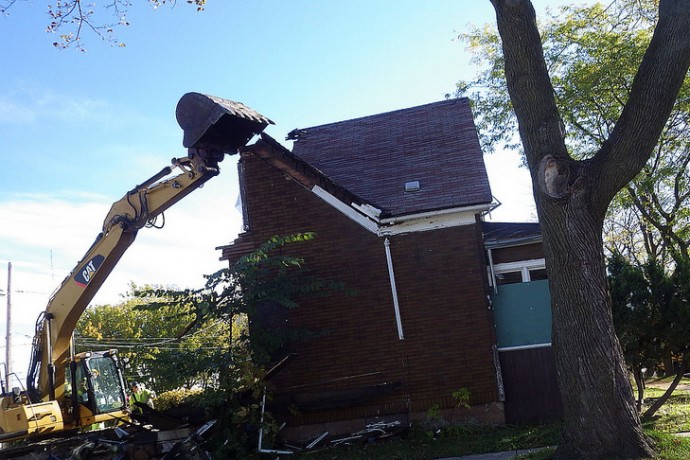 City officials say 100 of the 500 demolitions scheduled this year will be conducted in-house through a new pilot program. (Photo courtesy of the Department of Neighborhood Services)

Beginning next week, the Department of Public Works is set to launch a pilot program that will keep 20 percent of the city’s demolition work in-house. By performing some of the demolitions itself, the city can raze properties as soon as inspections are completed and utility services are disconnected.

City officials hope the program will expedite the process and save money.

“Bidding, bonding and contracting for demolition requires a significant staff and time commitment,” said Ron Roberts, manager of the condemnation division at the Department of Neighborhood Services.

The city plans to demolish 500 dilapidated houses this year, up from the 166 it razed last year. 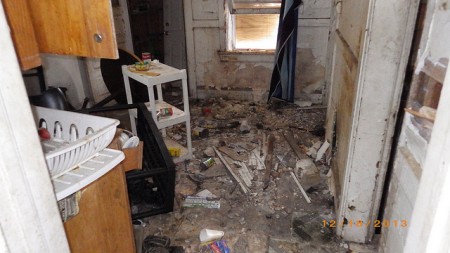 “It’s completely doable,” Roberts noted. Many of the condemned parcels pose a threat to public health and reduce the values of nearby properties. Data from the Milwaukee Police Department show that boarded-up houses are magnets of criminal activity.

“Having city forces capable of doing these demolitions allows us to address this growing problem by conducting demolitions at will,” Roberts said.

DPW will perform 100 demolitions, and the remaining 400 will be contracted to private companies through the traditional competitive bid process.

The 2014 city budget allocates $900,000 for the pilot program. The funding allows DPW to purchase new equipment.

Mayor Tom Barrett designated $11.7 million to address the foreclosure crisis through the Strong Neighborhoods Investment Plan. In total, $5.5 million will be spent on demolishing properties, with $2 million contributed by the state through a Department of Financial Institutions grant.

Todd Weiler, communications coordinator at the Department of Neighborhood Services, said that to be a candidate for demolition, a property’s cost of repair must exceed 50 percent of the structure’s assessed value.

“Most of our houses greatly exceed that number,” Weiler said.

The city prioritizes razing based on input from the Department of Neighborhood Services inspectors and the Milwaukee Police Department.

In 2013, the city used eight different demolition contractors to raze 166 properties. Contractors are selected through an open bidding process. When using local funding, the city is required to award bids to Local Business Enterprise Contractors (LBEs) if the bid is within 5 percent of the lowest bid price, and contract awards require 25 percent Small Business (SBE) participation.

The average cost of demolition, including asbestos abatement and utility disconnections, is $15,700.

The 500 scheduled demolitions will add to the city’s growing number of vacant lots, which is estimated by the Department of City Development at 3,000.

The city holds titles to more than 1,000 properties, but that number is expected to increase. As of last year, there were more than 3,000 properties going through the foreclosure process.