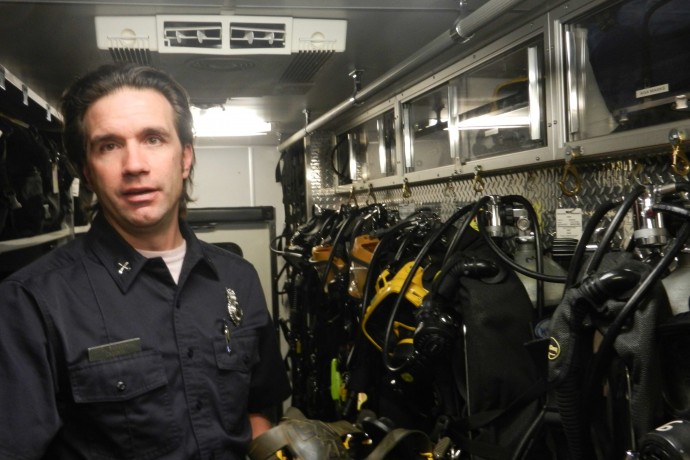 Captain Chris Schutte has been director of the Dive Rescue Team for the past year. (Photo by Kevin Ward)

This is one in an occasional series of profiles on the people behind the scenes who make Milwaukee work.

On a hot July day last summer Captain Chris Schutte was on duty at Engine 3 of the Milwaukee Fire Department. He was in his office checking equipment and shuffling through paperwork on next year’s budget when the phone rang. A plane had just crashed in Lake Michigan and the Milwaukee Dive Rescue team was needed. This was a rescue mission, Schutte said, that comes “once in a lifetime.”

As a child, Schutte was fascinated by fire trucks, sirens and the life of a fireman. He also favored movies by Jacques Cousteau and television shows that focused on scuba diving. As director of the Dive Rescue team, Schutte has been able to combine both interests in his career.

“When kids are little they want to be an airplane pilot, a policeman, a fireman, a doctor or an astronaut,” said Schutte as he leaned back in his chair. “ I wanted to be a fireman and I just stuck with it.”

Schutte got his first taste of that career as a sophomore at Mukwonago High School.  He decided to join the Mukwonago Fire Department’s Explorer Program. 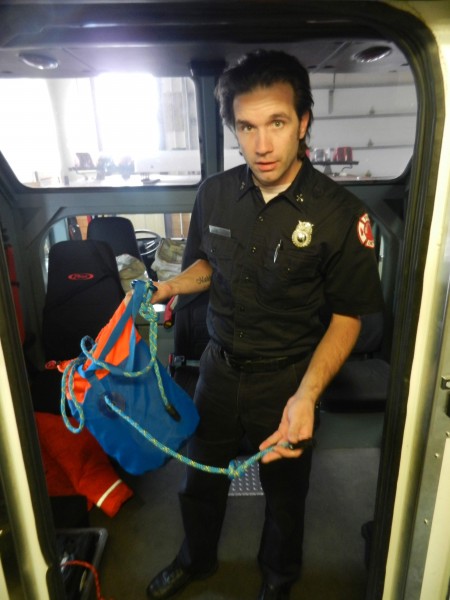 Schutte checks out equipment at Engine 3, which houses the Dive Rescue team. (Photo by Kevin Ward)

“The Mukwonago Explorer program really gets kids involved to the point where they actually respond to calls,” said Mukwonago fireman Bryan Stefancin. “It’s never surprising when you hear firefighters say that they started in Explorers.”

After graduating from Mukwonago High School in 1990, Schutte became a paid on-call-firefighter in 1991. He then earned his degree in fire science, his Emergency Medical Technician (EMT) license and his scuba diving license.  He said he took every opportunity he could to expand his firefighting knowledge.

However, Schutte has had setbacks in his firefighting career. He resigned from the Dive Rescue team a few years ago, after 10 years of service, over a “difference of opinion” about how the team was being run. He left Engine 3 and went on to be promoted to captain at Engine 31, 2400 S. 8th St., where he had once worked as a fireman and lieutenant.

Schutte thought he was finished with the Dive Rescue team, but it wasn’t finished with him. A year after he quit, he was asked to return, as director.

Schutte mulled over the offer for two weeks. He said he wanted to turn it down, but knew he wouldn’t have been true to himself if he ignored the challenge.

In January 2013 Schutte returned to Engine 3, 100 W. Virginia St., as director of the Dive Rescue team. On July 27, he received the call about the downed plane in the lake.

Schutte said he and his team jumped into the Dive Rescue truck and sped toward the site where the 1975 Piper airplane was last seen in the waters near Cudahy. They rapidly moved their boat into the water, and thanks to witnesses, he said, they were able to quickly find where the small plane had gone down.

“My guys did a phenomenal job,” Schutte said. “We found the airplane right away; everyone did their job to perfection.” The two men in the plane did not survive the crash, but the team was able to locate their bodies.

“You grow a defense mechanism over time to the things you see,” Schutte said. “Some deal with it through humor, a dark sense of humor, but for me I just desensitize myself. I have to or else I couldn’t do this job.”

After the incident, Schutte said the team members received words of appreciation from their chief and from the city for how efficiently and bravely they conducted the mission.

“We don’t like when incidents like this happen and we don’t want them to happen, but when they do, we want to be the ones who respond.”

Since Schutte became director of the Dive Rescue team he has taken part in 31 rescue missions. He’s recovered drunks who jumped into the Milwaukee River and kids who fell through the ice in the cold Wisconsin winters. According to Schutte, he has seen it all — some of which he wishes he hadn’t.

Schutte admitted that it can be difficult to deal with some situations that firemen face. But, he said, his team is made up of individuals who not only have accepted those difficulties, but have taken on an added challenge by joining the Dive Rescue team.