You are here: Home / Home / Carousel / Renovation of foreclosed duplex results in ‘net energy bill of zero’
Share this... 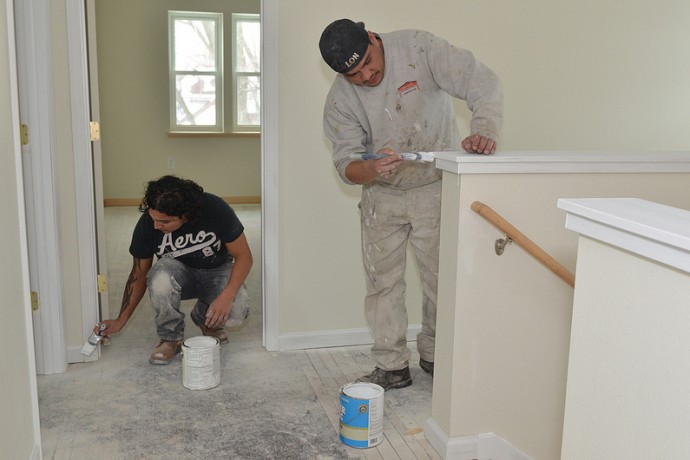 Ricardo Avila and Rodolfo Garcia add a fresh coat of paint to the interior of the renovated home on South 33rd Street. (Photo by Sue Vliet)

Renovations at 2010 S. 33rd St. go beyond fresh paint, new windows and flooring. Over the last seven months, contractors and volunteers have worked to transform the vacant foreclosed duplex into a single-family energy-efficient home.

Since 2008, the Turnkey Renovation Program at Layton Boulevard West Neighbors, Inc. (LBWN) has renovated vacant foreclosed properties. The homes are sold to a family who will live in it, helping to stabilize the neighborhood.

“We saw investors aggressively purchasing [vacant foreclosed] properties, and we were concerned that would deteriorate the neighborhood,” said Project Manager Jeremy Belot.

The 33rd Street home is the 12th to be renovated in the Turnkey Renovation Program and is unique for its energy-efficient features. According to Belot, the goal is to transform the home so that it produces as much energy as it consumes, resulting in a net energy bill of zero. 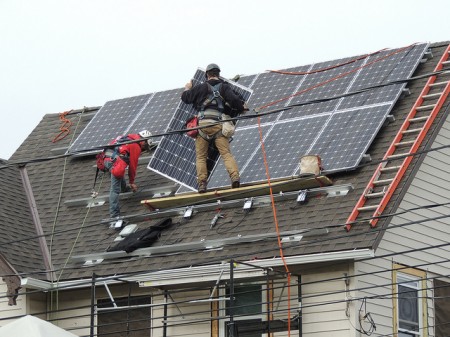 Equipped with solar “photovoltaic arrays,” or solar panels, and a solar thermal water heating system, the house will be able to produce hot water and electricity. Triple-paned windows, double insulation and ceiling fans also have been added throughout the house to keep energy bills down.

Karl Harris, 51, was able to purchase his energy-efficient home on South 37th Street in Burnham Park with the help of LBWN more than a year ago. Thanks to its solar panels and high-efficiency water heater and furnace, he is paying less in energy bills.

“The electricity is about half of what I was paying for an apartment, and that apartment was about half the size of [my current] house,” Harris said.

The Home Energy Rating System (HERS) gives the 33rd Street house an index score of 13, relatively low when compared to newly constructed energy-efficient homes, according to Belot. According to the U.S. Department of Energy, typical resale homes have an index score of 130. Finishing touches over the course of the next month will help in reaching a score of zero.

The five-bedroom home has already attracted prospective buyers. “When you do this much work to a house, it gets attention from people,” said Turnkey Renovation Program Assistant Tim Hoye.

“When [people] are looking to buy a home, they’re looking at not just the home, but the neighborhood,” Sas-Perez said. “To have a great home … in a neighborhood that is going to support a healthy great quality of life is just a really big bonus.”

Belot said the house on 33rd Street has been one of the more difficult renovation jobs, but it also will be the most rewarding. The house was “wreck” and there was not much worth salvaging, he added. With support from US Bank, Wells Fargo, City of Milwaukee Housing Trust Fund and various other partners and volunteers, the project will be on budget.

“We’re hoping that by [renovating this home], it opens people’s eyes to what the possibilities are to taking on a foreclosed property,” Belot said.

LBWN expects to list the house at $104,000, and it will be on the market in late February.