On a recent cold day, Matt Flower led a group of 20 seventh-graders on a snowshoeing expedition at the Milwaukee Rotary Centennial Arboretum. On the trails, Flower, a full-time environmental educator at the arboretum, pointed out animal tracks and asked the students to guess what kind of animal left the prints, using the skills they learned in a morning class.

For many of the Roosevelt Middle School students, this was their first time snowshoeing.

Trying to reassure the clumsy ones, Flower said, “If you’re not falling, you’re not trying!”

Learning is year-round at the arboretum, though lesson plans are revised for the snow and cold of winter. Snowshoes are swapped for gym shoes, and cross-country skiing takes the place of canoeing.

“The arboretum is used as much in winter as the other seasons,” said Ken Leinbach, executive director of the Urban Ecology Center, which is managing the arboretum under an agreement with Milwaukee County.

The arboretum, which spans 40 acres from Locust Street to North Avenue along the Milwaukee River, is a finalist for a Milwaukee Award for Neighborhood Development Innovation (MANDI) under the category of a “public space that helps build the community.” Other finalists in the category include Three Bridges Park and Journey House Packers Football Stadium. The MANDI winners, chosen by a committee put together by LISC Milwaukee, will be announced at a dinner April 9. 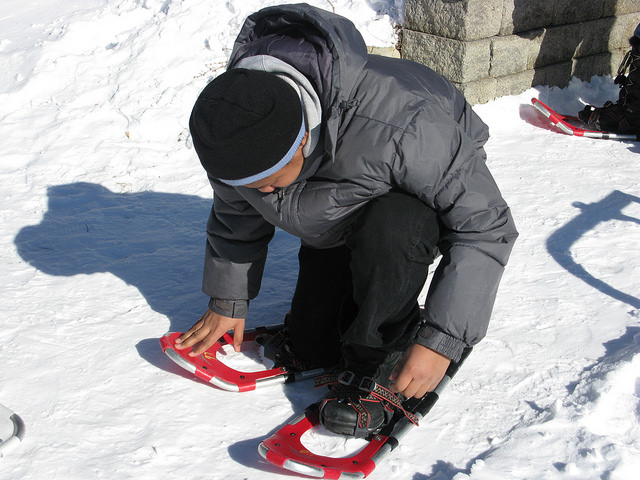 The urban oasis started as a conversation between Leinbach and the center’s neighbor, historic preservationist Pieter Godfrey, who wanted to donate four acres of land. The Urban Ecology Center was running out of space at Riverside Park, a nearby 15-acre outdoor classroom.

About the same time, the 400 members of the Rotary Club of Milwaukee were discussing a gift they wanted to give the community to celebrate the organization’s centennial in 2013. The group decided on the arboretum and provided the initial $400,000 of the $8.5 million project.

The arboretum idea appealed to the Rotarians because it combines children, education and the environment, Kathleen Eilers, president of the Milwaukee Rotary, told the Journal Sentinel before the September grand opening. It eventually will contain samples of every tree indigenous to southeastern Wisconsin.

Since its September debut, the arboretum has logged visits from more than 10,000 children on formal field trips, though Leinbach estimates this number is much greater when informal family visits are taken into account.

The arboretum is one of 12 parks designated as a U.S. Forest Service Children’s Forest site, but is unique because it is the only one in an urban area.

“Finding this type of green space so close to downtown is very unusual,” said Mary McCormick, executive director of the Rotary Club.

In the past three years, 2,000 volunteers worked to create the green space, which was a blend of existing parkland and former industrial land. The volunteers’ 12,000 hours of effort resulted in 12 distinct ecosystems. The landscape even has new soil, created from composted leaves deposited by the city and occasionally turned over. Scattered throughout the grounds are 2,500 new trees and 60,000 new plants along with four miles of trails, a newly constructed bridge and a stone archway. Designers placed hollow logs and trees made safe for climbing to create what Leinbach calls “imaginature” areas throughout the grounds.

“(The arboretum) is more than a piece of land that’s been rejuvenated,” McCormick said. “It’s about improving the community and making sure people have access to something they didn’t have before. There are so many kids that come here that don’t have grass to sit on or trees to (climb) on at home.”

Other partners in the project include the River Revitalization Foundation, which was designated as the land trust for the project, and the Milwaukee County Parks System, which will own most of the property when a land transfer is completed this year, Leinbach said.

The Rotarians allocated $100,000 of their donation to a preservation fund to assure the arboretum is maintained on an ongoing basis. The fund is approaching $1 million with a long-term goal of $3 million.

“This project itself is like a garden that needs to be tended,” McCormick said. “It’s a work in progress and will take years of growth and labor for the land to sustain itself.”

But the land already resembles the forest it is intended to become.

“A family saw a coyote with two pups silhouetted on the hill, right when the sun was setting,” Leinbach recalled. “And they said they thought they were in Yellowstone or Yosemite or someplace like that. They couldn’t believe they were just in their own neighborhood.”

Editor’s note: An earlier version of this article misidentified the U.S. Forest Service. We regret the error.