You are here: Home / Home / Carousel / Boys and Girls Clubs kicks off “Year of the GIRL” program
Share this... 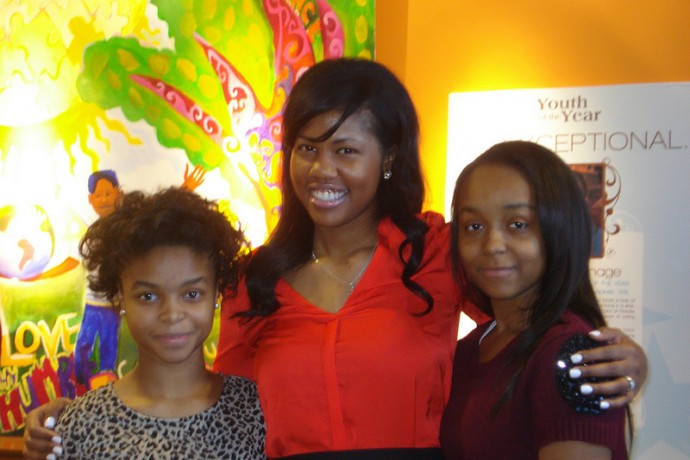 Alumna Janay McClain-Kelly (center), Eririonya Lucas (left) and Kenya Wilson were among those chosen to participate in the “Year of the Girl” program. (Photo by Kelly Meyerhofer)

As a young girl, Gwen Moore spent her time at the Boys and Girls Clubs of Milwaukee watching the boys play, recounted Denisha Tate, the clubs’ COO, at a recent gathering. The youth club, originally called the Busy Boys Life Club and open only to boys, extended membership to girls in 1984.

That was too late for Moore, but the experience likely influenced her interests as a member of Congress. Moore is a past co-chair of the Congressional Women’s Caucus and was the first African American congressman from Wisconsin when she was elected in 2004.

Today, the Boys & Girls Clubs offer programming geared specifically to girls, and the organization encourages them to participate, not observe. To commemorate the 30th anniversary of including girls, the Boys and Girls Clubs of Greater Milwaukee is sponsoring a “Year of the GIRL (Growing Inspirational and Responsible Leaders)” program.

The recent event at the Mardak Center, 1558 N. 6th St., kicked off the yearlong program with various sessions on female empowerment. The exclusive event was for the 30 girls and young women chosen to be ambassadors for the clubs throughout the year.

The girls were chosen based on their academic record, character and service. Five of the 30 are Boys and Girls Clubs alumnae, while the remaining 25 are middle and high school club members. 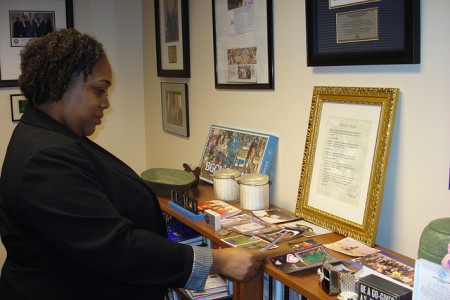 Denisha Tate, COO of the Boys and Girls Clubs of Greater Milwaukee, points out cards she’s saved from participants who benefited from the clubs. (Photo by Kelly Meyerhofer)

The ambassadors’ duties will include attending quarterly “Table Talks,” which will connect them to accomplished women in the community. The first talk, titled “Healthy Inside and Out,” is co-sponsored by the American Heart Association.  The ambassadors also will speak at citywide events.

“This will give (the girls) a platform to put their greatness to practice,” said Tate.

One of the alumnae ambassadors, Janay McClain-Kelly, 25, joined the club at age 9 and now works full time as a teen program coordinator. After graduating from Ohio’s Central State University, she worked at Northwestern Mutual but loathed the cubical setting.

After work, McClain-Kelly would volunteer at the Boys and Girls Clubs. She eventually decided she wanted to work for the organization that had given her so much. “(Boys and Girls Clubs) was the best thing that ever happened to me,” said McClain-Kelly, who explained that the club offered her a second home. Her single mom was often too busy to help her with homework or cook dinner.

One of the girls McClain-Kelly works with, 14-year old Eririonya Lucas, acknowledged she would probably be on the streets if she had not joined the club.

The Milwaukee branch of the nationwide organization boasts 41,000 members, one of the largest in the country. On any given day, average daily attendance is about 4,600 students, Tate said.

After-school and summer programs for children ages 5 through 18 focus on developing children’s academic, leadership and life skills, at a cost of $5 a year per member. Most of the clubs’ funding comes from government grants and corporate donors, Tate said.

“A lot of people think the club is just a place for swim and gym,” said Kristin Paltzer, a spokeswoman for the clubs. “But it’s so much more than that.”

Sydney Lee, one of the high school ambassadors, said the group built up her confidence. “Before Boys and Girls Clubs, I was shy and wouldn’t say anything,” she commented. “I thought what I said wasn’t important.” Lee, 16, does not resemble the girl she was a year ago when she joined. This past fall, she was one of 52 students chosen nationwide to attend a leadership seminar in Washington, D.C., to discuss immigration reform.

“I’m so proud to have been picked as an ambassador,” Lee said. “The (Year of the Girl) program teaches us that we have a voice. I feel like we have the power to change the face of Milwaukee.”