You are here: Home / Home / Carousel / Summit educates teens on realities of gun violence
Share this... 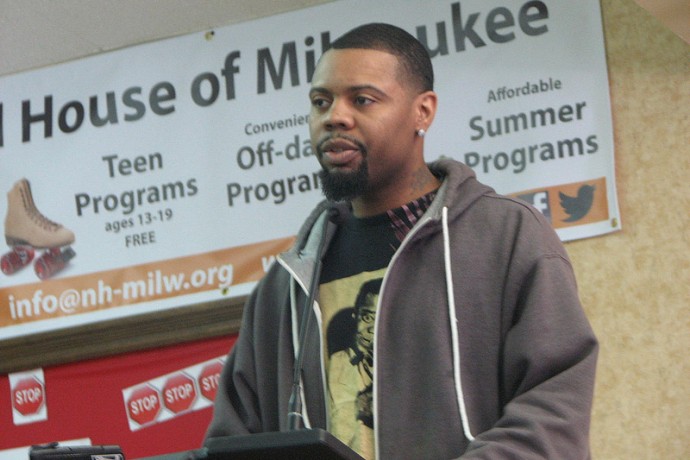 Edward Austin shares his story of how gun violence changed his life. (Photo by Karen Stokes)

Edward Austin is painfully aware of the reality of losing a loved one to gun violence and how making the wrong decision in the summer of 2009 changed his life.

Austin, 33, and his cousin, Lavelle Felton, were heading out to a nightclub. Austin’s uncle lent them his car, filled with gas, and warned them not to go to the gas station because of recent violence at night.

Nevertheless, after visiting the club, they stopped at the gas station to refill the tank. Once there, Austin recalled, “All kinds of disturbance occurred and then the shooting started.” Austin immediately jumped out of the car and ran. After the shooting stopped, he looked back and didn’t see Felton. He ran back to the car and found his cousin shot, motionless and unresponsive. Felton later died.

Austin and others shared their stories recently at an event called “Silence the Gun: Violence Prevention Summit” at Neighborhood House of Milwaukee, 2819 W. Richardson Place in Concordia. Co-sponsored by Safe and Sound, the summit was targeted to teens to educate them about the realities of gun violence. Milwaukee Mayor Tom Barrett, WNOV-AM’s Homer Blow, representatives of the Milwaukee Police Department and about 100 teens, parents and community activists attended.

“With the summit, I want to take away the fantasy of gun violence and dispel the rap ideas. I believe teens don’t realize the seriousness,” said James Austin, teen program supervisor at Neighborhood House, who invited his cousin, Edward, and his sister, Shatitia, to speak about their personal experiences. 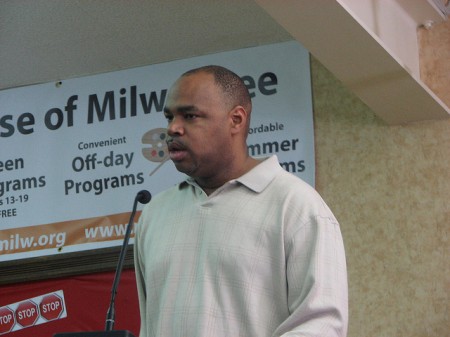 According to MPD statistics, there were 106 homicides and 532 non-fatal shooting victims in 2013. “Because of concealed carry, there are more shooters on the streets. Unfortunately people make quick decisions while having a gun,” said Officer Hue Kong, community liaison officer. He added, “Conflict resolution does not start with a gun.”

Shatitia Austin, also a victim of gun violence, knew the man who shot her.

On May 31, 1996, she had just returned home with her infant daughter. She looked out the bedroom window and noticed a car she recognized outside. Shots fired through the window and she was hit several times in the face and neck.

Shatitia went through surgery and still has pellets in her head today. But she survived and thrived with the support of her family. She now has three children and has earned a bachelor’s degree in business management.

The shooter was an acquaintance of Shatitia’s boyfriend, who owed him money and shot her in retaliation. The gunman was arrested, tried and sent to prison.

“People with guns need to have self-control,” she said.

Tracey Dent, community activist and founder of Peace for Change Alliance, challenged the teens to be part of the solution. “How are we going to solve these crimes if nobody speaks up?” Dent said. ”We need to stop the ‘I’m not snitching’ thing.” He also challenged the parents in the audience, reminding them that solutions begin in the home.

“We need to talk to our children; we don’t know the secrets that they hold about what they see happening in the neighborhood,” Dent said.

Jennai Thornton, 15, who is in the teen program at Neighborhood House and attended the summit, said she learned a lot, “mainly that there are other ways to solve conflict than just getting mad and getting a gun.”

“I shared the crime rate information from the police and the stories that people told with my family and I want them to come and get involved in other crime prevention neighborhood events,” the teenager said.

James Austin encouraged attendees to get involved in their neighborhood. He said he plans to hold additional events to reach people all over the city. “Teens need to … tell the authorities what they know,” Austin said. “More young people need to take a stand.”