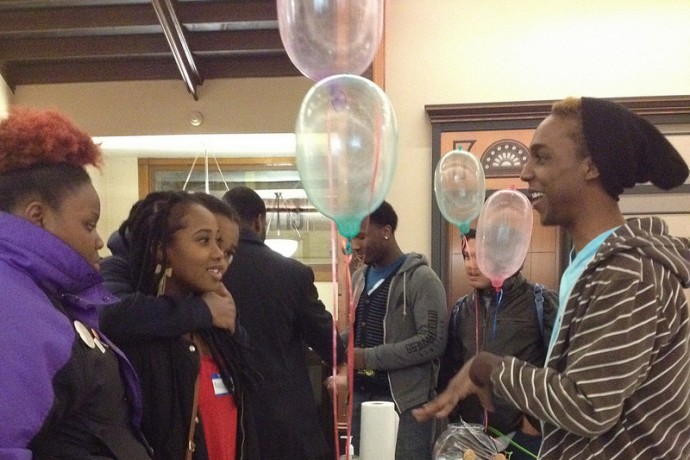 Lawrence Edwards, a 414ALL community health promoter, teaches attendees at the 414ALL launch party how to properly use a condom. (by Natalie Wickman)

Balloons made of blown-up male condoms were strewn throughout Milwaukee City Hall last Thursday while a crowd, proudly wearing buttons made out of condoms, celebrated the launch of 414ALL, a new program of Diverse & Resilient, which works to make condoms more available and less stigmatized for young people.

Diverse & Resilient is a non-profit organization that primarily works with the lesbian, gay, bisexual and transgender population. 414ALL is the group’s first program that works with the broader Milwaukee community. The lively launch party included distribution of free male condoms and lubrication, a photo booth, condom-inspired crafts and lessons about condom myths and usage. An enthusiastic crowd of teens and adults attended.

“I feel very strongly about public health and safe sex so I jumped at the chance to come here,” said Dylan Ambrosini, a volunteer at the event. “I haven’t seen a lot of campaigns like this and I do think they make a difference.”

414ALL’s name, an abbreviation of the phrase ‘for one and for all’ sends the message that condoms can be for everyone and can be used during any sexual act. 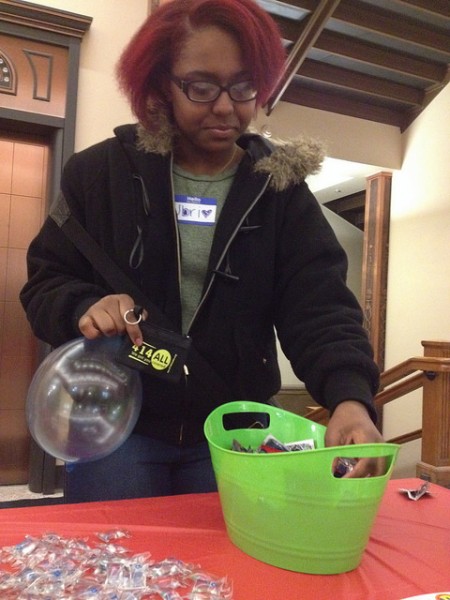 The program also includes a series of bus shelter advertisements featuring diverse young people tossing up condoms in a rainbow of colors. The ads were sponsored by the Milwaukee Health Department and Clear Channel Outdoor.

414ALL includes a team of community health promoters, ages 15-24, led by Donat. As many as 50 members can be on the team, and there are 12 on it now. The members are taught about myths and truths surrounding contraception and sexually transmitted infections (STIs) before going out into the community to distribute contraception and share their knowledge.

The promoters give out condom packs that include instructions, a list of places that distribute condoms and/or test for STIs, four male condoms and lubrication in silicone and water-based forms.

“Because (female condoms) are so expensive, we don’t put them in all of the condom packs but our health promoters do have some to distribute and they can educate their friends on (usage),” Donat said.

Young people from organizations such as Running Rebels and Boys and Girls Clubs helped develop the 414ALL program, including the logo, slogan and bus ad photos.

“For me, the most surprising discovery was that even though people knew where to buy condoms and even if they had the resources to get them, they didn’t know how to use them,” Hollander said.

The research found Milwaukee to be in a pre-planning stage, meaning that condoms were widely available but felt inaccessible to youth because of high prices or stigma.

Lawrence Edwards, a 414ALL community health promoter, gave attendees demonstrations of how to properly put on and dispose of condoms, stressing the importance of remaining calm and relaxed throughout the process.

Edwards suggested to the young men that when using a condom, they should take a few seconds to breathe and achieve a calm state of mind.” “Make sure you remember every step and you’ll have guaranteed safer (sex),” he said.

When it comes to buying condoms, youth can approach it the same way they approach clothes shopping.

“Get a couple kinds and just try them on, whether it’s on your own or with a partner,” Donat said.