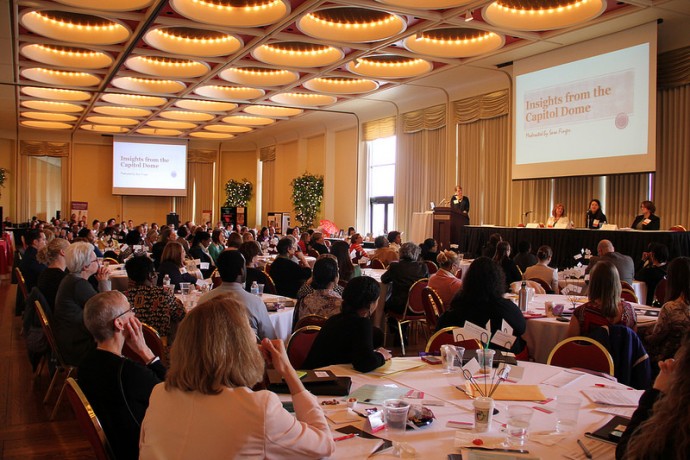 Hundreds of women’s health advocates gathered recently at the Marcus Center for the Performing Arts to discuss federal and state policies affecting a program that provides free breast and cervical cancer screenings to low-income women.

Sara Finger wraps up a panel discussion during the 5th Annual Women’s Health Policy Summit by placing a call.

She whips out her pink-cased iPhone and calls Governor Scott Walker’s office. It’s on speed dial.

“I’d really like the state to slow down the current restructuring proposal and help save the integrity of the Wisconsin Well Woman Program,” she tells the governor’s aide over the room’s sound system.

The conversation is quick and polite. When she hangs up, Finger receives applause from the hundreds of women’s health care advocates in attendance. The crowd shuffles into the hallway for a lunch of burritos, and some women place similar calls of their own.

Finger is the founder and executive director of the Wisconsin Alliance for Women’s Health. Among a myriad of services, the Madison-based organization monitors legislation affecting women’s health.

Finger and her colleagues made it clear at the summit, held recently at the Marcus Center for the Performing Arts, that one of their top priorities is to draw attention to what they say is a drastic and dangerous overhaul of the Wisconsin Well Woman Program (WWWP).

Furthermore, they’re frustrated with the “arbitrary” deadline and the lack of communication with state administrators.

The plan called for reducing the number of women’s health coordinators from the current 72 down to six, and scales back the more than 1,000 participating healthcare providers to a handful of systems to be selected through competitive bidding.

“The process didn’t include those on the front lines of the program, and that was very disrespectful and short sighted. All we’re asking for at this time is to halt the proposal and take the time needed to get the true input from the stakeholders and look at a more reasonable timeline,” Finger said.

Dawn Anderson, executive director of the Wisconsin Breast Cancer Coalition (WBCC), said she has worked closely with WWWP State Director Gale Johnson in the past and has invited her to speak at WBCC events to inform members about the Well Woman Program.

“So you can imagine our shock when we found out second hand that these dramatic changes were happening without any prior input from the breast cancer community,” Anderson said.

For nearly 20 years, the WWWP has provided breast and cervical cancer screening and diagnostic services to low-income women with little or no health insurance. The program receives federal funding through the Centers for Disease Control and Prevention (CDC), as well as state aid, to pay for mammograms, Pap tests to screen for cervical cancer and multiple sclerosis testing for women who meet income requirements and are between the ages of 45 to 64.

The program is administered by the Wisconsin Department of Health and Human Services and is available in all counties. The state assigns a local WWWP coordinator to each county and the city of Milwaukee. Covered services are available from any of the more than 1,000 participating healthcare providers throughout the state. There is no premium, co-payment or deductible for WWWP clients.

Program administrators say that since it launched in 1994, the WWWP has provided more than 500,000 cancer screening and diagnostic services to about 70,000 eligible women.

On Dec. 12, Johnson sent a memo to coordinators announcing that the state department had decided to restructure the program due to increasing funding constraints and changes in the national health care system.

“We anticipate that the CDC funding and the need for WWWP services will diminish in the future as women gain access to expanded health insurance coverage for their more comprehensive health care needs as a result of the Affordable Care Act and recent changes to Wisconsin’s BadgerCare Plus Program,” the memo stated.

The proposed cuts would go into effect July 1, giving the department six months for the transition.

After sending out a press release warning the public about the dangers of the state’s proposal to scale back the Wisconsin Well Woman Program, Finger said she was forwarded dozens of letters from the program’s clients voicing their opposition to the restructuring.

One of those letters came from a woman, who signed her name “Debra X,” who has been battling breast cancer since 2006. In the letter addressed to Karen McKeown, Wisconsin’s administrator of public health, she stated that scrapping the local coordinator positions would be catastrophic to the program and its clients.

“I am very worried about how the restructuring of the program will impact my situation going forward as I am terminal. I have very little money, and I experience side effects due to the chemotherapy treatment I receive… I am very concerned that if this program is discontinued or  restructured quickly without considering the women it is impacting that I will be out of luck,” she wrote.

Johnson insisted that the program is not ending. “What we are doing is restructuring the program to be administratively more efficient while still providing the highest quality services to women,” she claimed.

As for the funding, Johnson expects to hear from the CDC in May. “At this time we do not know what funding we will be getting. We do expect we will see a decrease,” she said. Johnson said the CDC contributed $3.3 million to WWWP in 2013, and the state added $2.2 million.

Finger and other opponents of the restructuring question the state’s argument that funding for WWWP may dry up anytime soon. State funding for the program is secured until June 2015, and there are another three years remaining in the agreement with the CDC.

Brittany Behm, a spokeswoman for the CDC, said in an email that no future funding decisions have been made yet. In fact, funding for the agency’s National Breast and Cervical Cancer Early Detection Program, which gives WWWP its CDC funding, actually increased last year.

Several local coordinators said they anticipated changes knowing that the Affordable Care Act, known also as Obamacare, would increase coverage for cancer screenings through the insurance marketplace and regulatory changes.

Even so, they were shocked by the magnitude and timeline of the proposal, and fear some women will fall through the cracks.

“December 12th was a blow to us,” said Susan Garcia Franz, WWWP coordinator at Winnebago County Health Department. She added that Johnson held a conference call to receive feedback from coordinators only after the Dec. 12 memo was sent out.

Nearly a month later, Johnson sent out another memo, offering three options to revise the program. She asked the coordinators to vote for their preferred option, none of which allows for more than 10 regional coordinators.

Garcia Franz said she still doesn’t feel she’s been able to provide input on the plan, and is instead being asked to vote on an option that she had little to do with.

Milwaukee’s Well Woman program helped serve more than 2,300 women in 2013, and the number of enrolled women this year has remained steady, according to the city’s health department.

Last year, 94 Wisconsin women were diagnosed with invasive breast cancer statewide through the WWWP. The Milwaukee program enrolled 84 women into WWWP Medicaid (48 of those were already diagnosed with cancer and had lost their insurance or were women who had been diagnosed in past years and were re-enrolling in Medicaid for care). The city’s WWWP diagnosed approximately 36 women with breast or cervical cancer.

Tiffany Barta, public nurse coordinator with the Milwaukee Breast and Cervical Cancer Awareness Program, works closely with the city’s WWWP coordinator. She too questions the proposal’s timing, especially given that funding cuts have yet to be determined.

Barta worries that a large cohort of Milwaukee women may not be eligible for the ACA and could fall between the cracks, particularly the city’s undocumented population.

“The Well Woman Program is a safety net to assure those preventive services will remain intact for everyone,” Barta said.

Johnson, WWWP’s state director, said she did not have any projections on how many women would be leaving WWWP and going into BadgerCare or the federal marketplace.

Anderson, of the Wisconsin Breast Cancer Coalition, is unsatisfied with the answers coming from Johnson and the state department.

“Their assertion is that because of the Affordable Care Act and Gov. Walker’s entitlement reform, fewer women will need WWWP services,” she said.

“And yet, when we’ve repeatedly asked what projections they have for women leaving WWWP for other health care options, they have no numbers. No data. No projections. Just an expectation that there will be fewer women.”

A 2012 study by George Washington University concluded that although the ACA will reduce the number of uninsured women, programs such as the WWWP “will still be needed to support access for millions of women who will remain uninsured.”

Furthermore, the study shows that “the number of future uninsured low-income women will depend on state policy choices and will remain high in states that fail to implement Medicaid expansions. In those states, the demand for screening services will increase.”

Walker has been a vocal opponent of the Affordable Care Act and rejected federal funds to expand Medicaid.