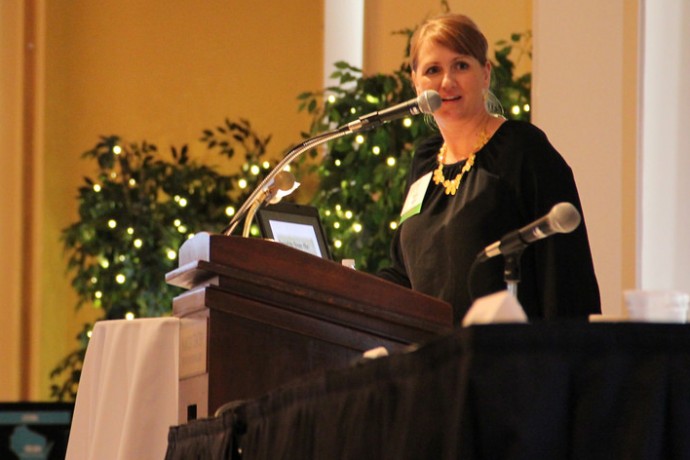 Sara Finger, executive director of the Wisconsin Alliance for Women’s Health, was in Milwaukee recently to urge women to voice their support for the Wisconsin Well Woman Program. (Photo by Scottie Lee Meyers)

Dec. 1, 2014: An RFA (Request for Application) will be issued to select the providers who will form the new provider network.

April 1, 2015: The new provider network and the new service coordination model will be in place.

Local women’s health advocates were relieved to hear the announcement late last week from the state’s Department of Health Services that the cutbacks to the Wisconsin Well Woman Program have been delayed until 2015.

“We are grateful to see the state respond to the outcry from women’s health advocates frustrated and disappointed with their original plan to restructure our Well Woman Program,” said Sara Finger, executive director of the Wisconsin Alliance for Women’s Health.

The Wisconsin Well Woman Program (WWWP) receives state and federal funding to provide breast and cervical cancer screening and diagnostic services to low-income women with little or no health insurance and who are between the ages of 45 to 64.

The state’s original restructuring proposal, as reported by the Milwaukee Neighborhood News Service, would have reduced the number of local coordinators from the current 72 down to six, and scaled back the more than 1,000 participating healthcare providers to a handful of systems to be selected through competitive bidding. The proposed cuts would have gone into effect July 1, giving the department six months to make the transition.

State administrators have said that the restructuring is needed because they expect the need for WWWP services to diminish as women gain access to expanded health insurance coverage from the Affordable Care Act (ACA) and recent changes to Wisconsin’s BadgerCare Plus Program. They also said they expect to see decreased federal funding in May.

Finger and other women’s health advocates urged the state to push back the July 1 deadline in order to allow more time to gather data about how many women will be picked up by the ACA and BadgerCare.

Karen McKeown, Wisconsin’s administrator of public health, said in a memo to Well Woman Program providers and local coordinators that pushing back the deadline to June 2015 will allow WWWP partners more time to prepare for the transition.

Finger said it’s “incredibly important” that the state keep its commitment to invest time and resources to work with these women to transition them into the appropriate health care program.

“We have yet to see this administration fully commit to making the Affordable Care Act work in Wisconsin and sincerely hope politics are put aside to ensure health care reform works for all Wisconsinites especially the women served by this important program,” Finger said.