Editor’s note: This is one in an occasional series of articles about finalists for 2014 Milwaukee Awards for Neighborhood Development Innovation (MANDIs).

Facing domestic violence that put her two kids in danger, Ameenah Joiner, 20, had few options in 2008.

“I just got up in the middle of the night and left,” Joiner said. “I needed a change of scenery because I didn’t want to bring my kids up in that atmosphere.”

After fleeing from Chicago to Milwaukee, Joiner found United Methodist Children’s Services, a not-for-profit organization that helps Milwaukee citizens living in poverty, and joined its transitional living program. She then climbed the UMCS employee ranks and now, almost six years later, is the resource center coordinator.

“(UMCS) lit a fire in me and it’s still burning,” Joiner said. “At this point, I’m ready for anything. I’m always looking for opportunities to improve myself or involve myself in something.”

Located at 3940 W. Lisbon Ave., UMCS is a finalist in this year’s Milwaukee Awards for Neighborhood Development Initiatives (MANDI), sponsored by U.S. Bank in partnership with LISC Milwaukee. 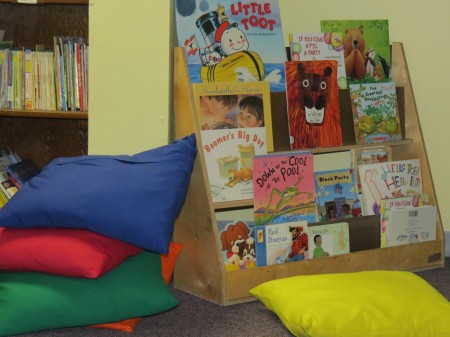 UMCS is composed of three branches; the Growing Tree Children’s Center, a daycare center mainly used by families in the W-2 Welfare to Work Program; a transitional living program for low-income, single-parent families; and a family resource center, which provides emergency food resources and clothing.

“We don’t view (the MANDIs) as a competition with other groups in the neighborhood or in the city for that matter,” said Perry Huyck, director of UMCS. “Our whole philosophy is to work collectively to effect positive development and change.”

To create that change, UMCS employees look past the generalizations associated with poverty.

“In this day and age … the cultural idea about people living in poverty is very judgmental,” said Cindy Thompson, fund development director at UMCS. “I am fairly unapologetic about stepping on toes of people who hold that cultural assumption.”

That judgmental attitude, Thompson said, comes from the belief that people are poor because they’re lazy or making bad decisions. But there are many other factors that play into poverty, including mental and traumatic illness, racism, generational poverty and long-term unemployment.

“Poverty is a complex issue but when you get down to it, we’re talking about people, not issues,” Thompson said. “I get people who thank me because they’re like-minded, and I get people who acknowledge that I have challenged their way of thinking.”

Narrow-minded generalizations are just one of the challenges Thompson faces while working to generate funds for UMCS. She said people have been extremely cautious with their money since the 2008 recession.

The three branches work together for long hours, especially in the childcare center, which is directed and administrated by Theresa Purifoy.

“There are times where I’m here from 6 in the morning until 6 at night,” Purifoy said. “It could be a combination of paperwork needing to be done or sometimes parents don’t come on time and I’m not leaving until I know the kids are home safe and with the right person.”

Purifoy’s dedication is typical of the staff, according to Huyck.

“In this type of work, being successful requires personnel who understand that what they do is greater than simply putting in the time and collecting the paycheck,” Huyck said. “Virtually all of our staff understands that what they do has a greater calling than their particular job.”