You are here: Home / Home / Carousel / Westlawn Gardens ‘building block’ to revitalize northwest side
Share this...

Westlawn Gardens is far from the cookie-cutter uniformity typically associated with public housing.

In transforming Westlawn to Westlawn Gardens, the Housing Authority of the City of Milwaukee bulldozed 332 barracks-style units and replaced them with 250 diverse units of townhouses, single-family homes and multifamily apartments.

“Westlawn Gardens is seen as one piece, one building block, in the revitalization of the northwest side,” said Paul Williams, a spokesman for the authority.

Westlawn Gardens is a finalist for a Milwaukee Award for Neighborhood Development Innovation (MANDI) in the “State Farm Building Blocks Award” category, for a real estate project that improves the community. Other finalists in the category include King Drive Commons IV and Layton Boulevard West Neighbors’ Rent to Own Homes. The winners will be announced April 9. 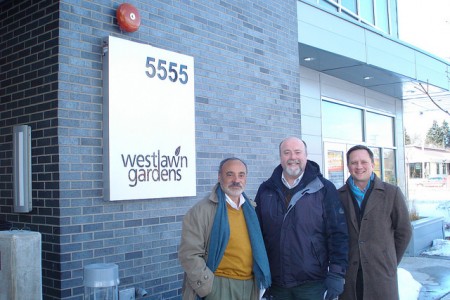 The $82 million project to renovate the eastern half of Westlawn, from N. 60th to 64th Street began in 2010 when the Wisconsin Housing and Economic Development Authority (WHEDA) awarded the city housing authority $76 million in tax credits. PNC Real Estate purchased these credits, which the Milwaukee authority will purchase in 10-15 years. Grants from the Fund for Lake Michigan and Milwaukee Metropolitan Sewerage District also contributed to the financing package.

Tony Perez, executive director of the Milwaukee housing authority, said it is also applying for federal Choice Neighborhoods funds to rehabilitate the other half of Westlawn, which stretches to N. 68th Street.

“I’m not bitter about living in this old section because I know eventually this half will also be renovated,” said Jackie Burrell, president of the Westlawn Resident Council. Burrell has lived at Westlawn for more than 30 years.

While only one of the townhomes went through the costly certification process, each of the units was built to the same standards. Shallow rain gardens placed on the sides of the street collect and absorb runoff from rooftops, sidewalks and streets. The townhome units were pre-piped for installation of photovoltaic panels, which harness the sun’s radiation to create electricity. If financing becomes available, the panels will be installed, reducing utility bills for residents of the townhomes and the housing authority, which pays the utility bills for the two mid-rise buildings.

Because the Silver Spring area is considered a “food desert,” a three-quarter acre community vegetable garden was incorporated in the design. It is the first garden to be located on a housing authority property, Williams said. Growing Power, a national nonprofit that promotes urban farming techniques, manages the garden and provides training to residents. A plot is available to all residents for $10. 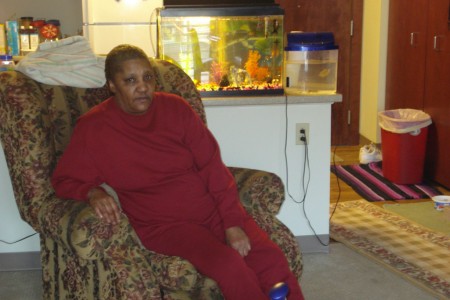 Westlawn Gardens resident Caroline Greer said she is looking forward to planting a garden of greens, peppers and tomatoes this summer since fresh produce is hard to find in her neighborhood, she said.

But perhaps the largest improvement in sustainability is in giving residents power over their own utility bills.  All 726 units used to be controlled on one meter, one of the largest master-metered gas distribution systems in the state, said Warren Jones, director of development for the Housing Authority. Now, each unit, except for the pair of apartment buildings, has its own gas and electric meter.

“A large portion of affordable housing is master-metered because it was most efficient to build it that way,” Jones explained. “But it didn’t promote conservation on the people’s part. Now, everyone is responsible for paying their own utilities.”

Low-income residents who qualify pay no more than 30 percent of their income in rent.

“But we hope (Westlawn Gardens) will be populated not only by low-income residents but a range of incomes, so the neighborhood will be more attractive,” Williams said. “It’s not housing of last resort. … We designed something that people of all incomes want to live in.”

Land has been set aside to build about 140 market-rate units in the future, so that Westlawn will be a mix of affordable and market-rate housing, Perez said. The housing authority also released requests for proposals to lease retail space within the Westlawn Gardens complex. Residents have expressed interest in a grocery store, pharmacy and family restaurant.

“Westlawn will now be more connected to its neighborhood and will look and feel comfortable instead of institutional,” former Milwaukee mayor John Norquist wrote in an email. Norquist is now president of the Congress for New Urbanism, which promotes unique alternatives to urban design.

Norquist added, “The new design raises the quality of life for the Milwaukee citizens who live in Westlawn Gardens and also those who live nearby.”