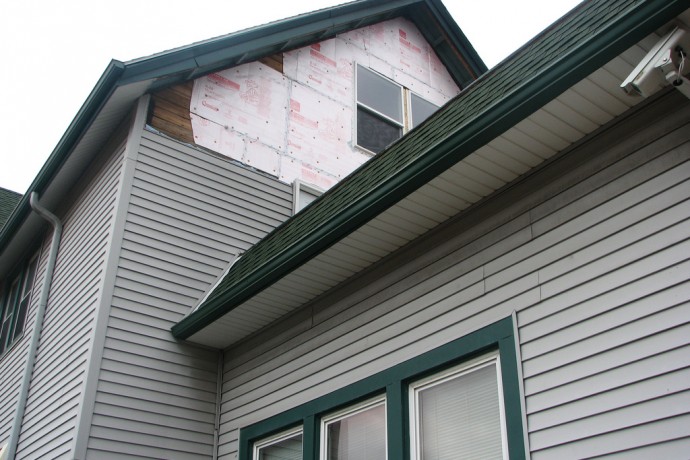 Renovation of the Walnut Way Community Center is nearing completion after a serious fire last fall. (Photo by Karen Stokes)

Walnut Way is proving that it takes more than a fire to stop its progress. The non-profit Lindsay Heights community organization had a fire last September that caused significant damage to the Walnut Way Community Center, 2240 N.17th St.

“There has been much progress on the community center renovations but there is still work to be done,” said Sharon Adams, director of programs at Walnut Way.

Repair of the building is near completion, but improvements are still needed to comply with the Americans with Disabilities Act (ADA), according to Larry Adams, director of environmental stewardship at Walnut Way. The organization is adding a first-floor chairlift and straightening a winding staircase to accommodate the lift. The dining room is being enlarged to make it more accessible for people in wheelchairs. 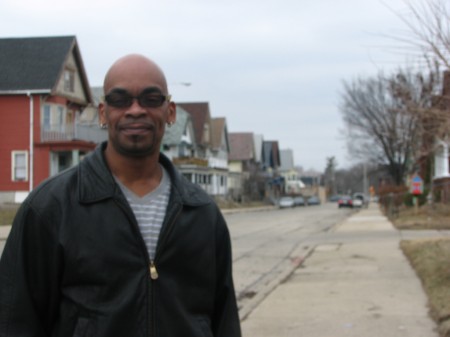 Tony Cooper, a resident of Lindsay Heights for more than 20 years, said he appreciates what Walnut Way does for the community. (Photo by Karen Stokes)

“Renovations should be completed later this year,” said Sharon. “In many ways the fire has ignited our energies to move forward.”

“The community center will now mostly be used for agricultural programs because of the proximity to the gardens and orchards,” explained Larry Adams. The building had been used for offices and community gatherings before the fire. Walnut Way temporarily moved to 1836 W. Fond du Lac Ave. and plans to relocate permanently to the Walnut Way Innovation and Wellness Commons at 16th Street and North Avenue. Walnut Way has purchased the building and the empty lot adjacent to it.

The commons will provide economic development, intervention and wellness programs, and family services.

“We are still in the first phase of the project and will break ground for the new construction later this year,” Larry said. “This was a concept that we’ve been working on for four or five years.

“The project should be up and running in summer 2015,” added Sharon.

A mixture of funds from an insurance settlement, donations, grants and fundraising helped cover the cost of renovations to the community center and Wellness Commons, Larry noted. 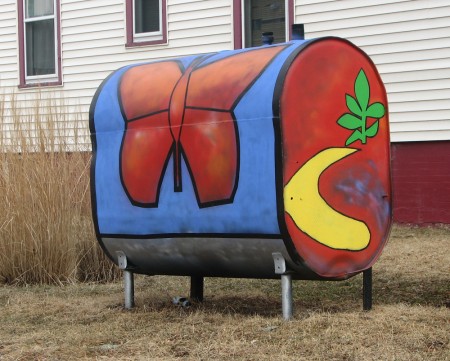 Artist Evelyn Terry was decorating this grill when the fire broke out at the other end of the block. (Photo by Karen Stokes)

The fire did not interrupt Walnut Way’s programming. Just nine days after the fire, the group’s annual Harvest Day was held at another location. On April 26, aligned with Earth Day, Walnut Way will hold its Neighborhood Lift Up, an event to clean up and refresh the neighborhood. The experience is about more than just cleaning. “It’s a time of collective effort and fellowship, activities and food,” said JoAnne Sabir, associate director of the Lindsay Heights Neighborhood Initiative.

Walnut Way Conservation Corp. is the lead agency in Lindsay Heights for the Zilber Neighborhood Initiative.

According to Tony Cooper, a Lindsay Heights resident for more than 20 years, “Walnut Way works hard to enhance the neighborhood. They planted trees and worked with us to develop a rain garden in our yard. The rain garden manages the storm water and beautifies our yard with plants in the summer. They even painted our grill.”

Artist Evelyn Terry, who conducts art workshops sponsored by Walnut Way, was at the end of the block decorating Cooper’s grill at the time of the fire at the community center. “People in the neighborhood ran to the burning building trying to help, some with water hoses,” Terry said.

“It showed that in our community we need amazing organizations like Walnut Way that function well; it inspires people,” Terry added.

“Instead of running from the fire, our neighbors ran to the fire ready to assist and wanted to know what they could do to help rebuild,” Larry said. “It was very humbling.”