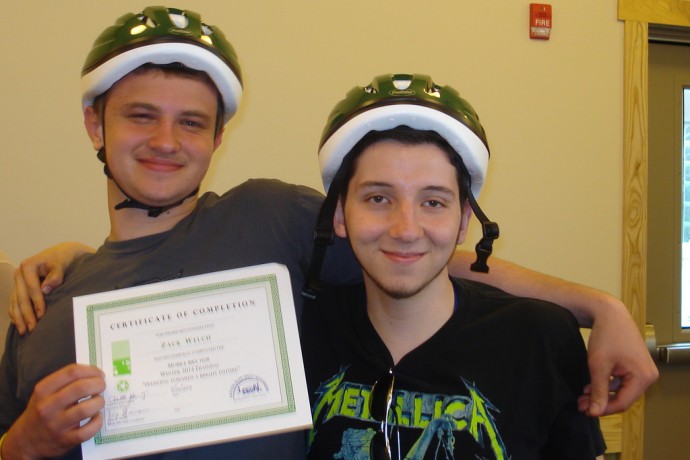 (From left) Participants Zack Welch and Cesar Becerra show off their helmets and certificates after the graduation ceremony. (Photo by Kelly Meyerhofer)

What started out as a couple of high school students helping Jorian Giorno patch some bicycle tires last summer turned into an idea for a full-fledged program.

While last summer’s volunteers weren’t able to participate in the nine-week program because they attend high school outside the area, their work paved the way for seven other students to attend workshops to learn bicycle repair skills.

Giorno explained to attendees that the course was split into two sections. The first half was dedicated to hard skills such as learning the parts of a bike and basic brake repair. The other half was devoted to soft skills such as working with customers. 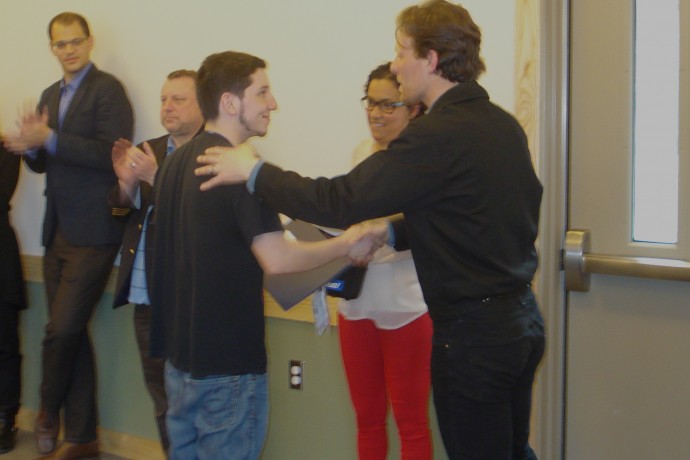 “(State Farm) supports making this neighborhood a great place to live,” Fernandez said. “This program may spur economic development and help these youth get future jobs.”

While Isidoro Varela, 17, does not want to turn bike repair into a career, he was happy to learn skills that would help him when he applies for jobs.

“I didn’t know anything about bikes, so it was cool to learn,” Varela said.

“I’ve always wanted to work as a bike mechanic for my career,” Becerra said, beaming. “I’m happy I’ll be able to help people explore their neighborhood.”

All the graduates were invited to work with Giorno this summer repairing bikes in the neighborhoods of Silver City, Burnham Park and Layton Park, which together make up Layton Boulevard West. Two will be paid for 10-12 hours of work per week while the others will work on a volunteer basis. The two interns who will receive pay will be chosen in the next few weeks, said Giorno.

When the Mobile Bike Hub debuted in May 2013, Giorno worked solo and completed an average of six to 12 repairs a day, for a total of 210 bikes in three months. He said he is looking forward to having interns to do the basics such as patching tires and fixing chains, which will free up the experienced cyclist to complete more complex repairs.

Graduates received several tools to assist in their work this summer. Aside from a certificate of completion, five participants were given a bicycle helmet, pedals, grips and a shirt from a local bike shop. The two participants with perfect attendance received a starter tool kit.

All seven also earned a reference letter from Giorno, who said, “I want to do as much for you and your future outside of this program as I can.”