On a cool, sunny day last weekend, neighborhoods throughout the central city worked to pick up trash, plant trees and build community all at the same time.

Park cleanups were held at a half dozen parks as part of the Great American Cleanup.

In the Lindsay Heights,more than 160 volunteers gathered for the Neighborhood Lift-Up, an Earth Day event sponsored by Walnut Way Conservation Corp.

“This neighborhood is our family, said 10-year-old Jerri Dawson. “We are trying to get people to help keep our neighborhood clean; that’s why I am here.”

Jerri and her mother, Fran Dawson, joined teams of people from area churches, motorcycle clubs, Marquette University, sororities, fraternal organizations and towns as far away as Whitefish Bay to do some spring cleaning. 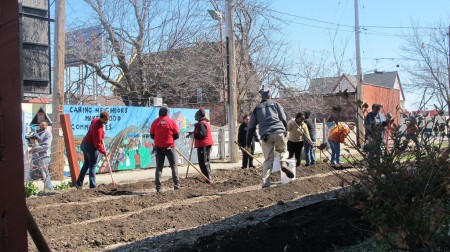 After a light breakfast and coffee, cleanup crews began working around 10 a.m. and picked up trash, landscaped and worked in the Walnut Way gardens.

Caroline Stanko and Catherine Meccia, students from Marquette University and members of the Pi Beta Phi sorority, came with several of their sorority sisters. “We just want to give back to our community,” Stanko said.

“I worship in this neighborhood and want to beautify the community and keep the environment clean,” explained Darnell Irven, a member of the Central Church of Christ,1830 W. Monroe St.

Rigii Njoroge, president of Walnut Way, said the cleanup demonstrates that residents and businesses have pride in their neighborhood.

“We have to make the area presentable to us who live here and to others who drive through here,” Njoroge explained. “This area is in proximity to the downtown area, Marquette University and other great things that this city offers.”

Jacqueline Ward, executive director of the North Avenue and Fond du Lac Avenue Business Improvement District (BID), works with area businesses to keep their surroundings clean.  “Keeping the neighborhood clean should be ongoing, not something that just happens once a year,” Ward said.

Added JoAnne Sabir, associate director of the Lindsay Heights Neighborhood Initiative, “Our neighbors and partners came out in record numbers and showed their investment in our community.”

In the Amani neighborhood, about 75 people targeted the blocks from Locust Street to Auer Avenue and 21st Street to 24th Place. Yard signs proclaiming “I Am Amani” on one side and “Keep Amani Clean” on the other were distributed to participating neighbors.

The cleanup was staged at a vacant lot on 23rd Street and Burleigh, across the street from COA Goldin Center and NOVA High School. The site was selected because it overlooks the future Moody Park, which Milwaukee County Parks is projecting to be completed within the year. Neighborhood groups are planning to do regular cleanups throughout the summer in the area adjacent to the park.

The City of Milwaukee estimated that approximately 3,000 pounds of trash were removed from the Amani neighborhood.

About Karen Stokes and Adam Carr