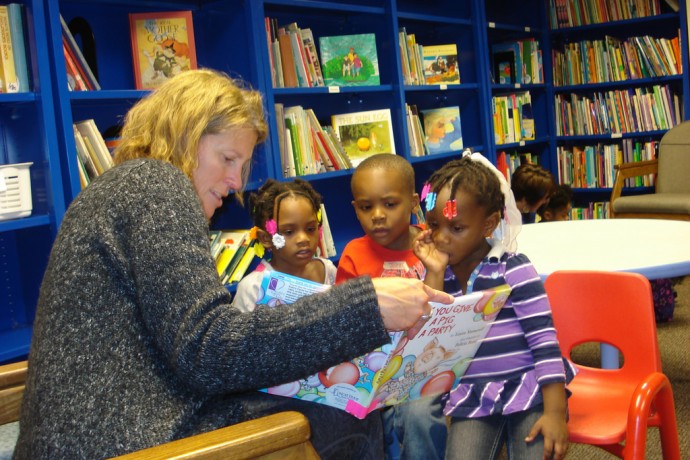 Volunteer Brenda Levatich spent a recent afternoon reading to children at the Next Door Foundation. (Photo by Kelly Meyerhofer)

Books for Kids, a giving library that runs entirely on donations from the community and corporate-sponsored drives, is seeking more book donations in response to an estimated three-fold increase in demand.

In 2010, library coordinator Pam Edyburn estimated Books for Kids distributed 45,000 books. But this past year, more than 71,000 books were provided to children in the city.

Edyburn attributed the increased demand mainly to word-of-mouth and marketing. But she suggested economic realities also might play a role.

“We want to make sure that every child in Milwaukee has the opportunity to own and read books in their home,” Edyburn said.

“The parents who come into the library face many barriers,” she added.  “Many don’t have a library card and some that do can’t use it because they’ve incurred a fine. When they’re worrying about how to put food on the table, returning library books becomes less of a priority.” 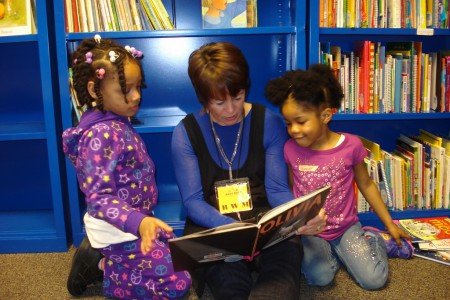 Geri Seidenstricker, a volunteer at the library since 2009, says she keeps coming back because she loves the children. (Photo by Kelly Meyerhofer)

Because the program is targeted to children ages 6-weeks to 6-years old, picture books are in high demand. The shelves containing this genre are sparse; the bin of board books, which are saved for the youngest patrons, is empty.

Parents and teachers flock to the library at the Next Door Foundation, 2545 N. 29th St. in the Metcalfe Park community to obtain free books.

Edyburn says sometimes even second-, third- and fourth-grade teachers stop by the library to pick up picture books for students who have fallen far below their reading level.

Volunteers devote two hours each week reading books to children at Next Door. “I missed being around kids, so volunteering here was a natural fit,” said Julie Attermeier, a retired teacher.

Edyburn said one of her favorite experiences is related to a young boy with developmental delays. He was not blind, but did have trouble seeing. The librarian would set aside books with sound or large pictures. His mother, who spoke little English, took the time to write Edyburn a thank-you card that praised how much her son’s reading ability and attention span had improved since she started visiting Books for Kids.

Day care providers, city school teachers and parents are encouraged to stop by the library on Thursdays from 2-6 p.m. Parents can get up to four free books per month for each child. Day care providers and teachers have different allowances depending on the circumstances.

Edyburn pointed out that the program’s purpose is not to supply classrooms. The books are taken back to classrooms and daycare centers, where they are distributed to children.

“We want to encourage the idea of reading for fun, no matter what a child’s reading level or home conditions are like,” Edyburn said.

Michael Key teaches at Garland Elementary School, 3120 W. Green Ave., and has utilized Books for Kids since the program began in 1990.

Said Key, “I get to put books in the hands of kids and that’s the greatest gift I can give.”

Note: A previous version of this story incorrectly stated the number of hours per week volunteers read to children, and included an incorrect telephone number to call to donate.