“It was all a big dream, a beautiful dream. It doesn’t even feel like it was in this lifetime,” said Lawrence Madrigal, a 20-year-old native of South Milwaukee, about his childhood before his father’s death and his older brother’s incarceration.

Madrigal, who recently graduated from MATC, speaks with a gentle voice that conveys wisdom and maturity. When he talks about his life experiences relating to death and beauty, he comes across as a young man with an old soul.

It’s almost impossible to believe that only a couple of years ago Madrigal was on a path heavily influenced by gangs and drugs. The loss of his father and brother led him to search for brotherhood in the streets.

The only constant he’s had in his life is art.

“It’s beautiful creativity, it’s being passionate about something, it’s fulfillment, it’s something that needs to come out,” he said, describing how he feels about making art.

Madrigal has created art all of his life but didn’t start to take it seriously until he joined ArtWorks for Milwaukee.  Through ArtWorks, he learned how to transform his hardships into constructive creativity. 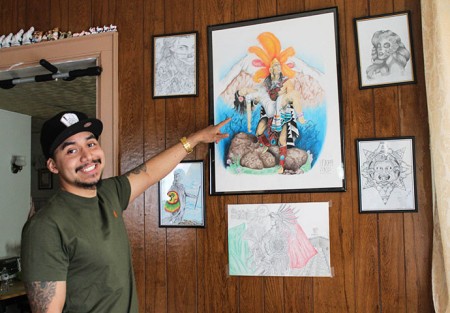 Lawrence Madrigal points to a piece of his original art. (Photo by Madeline Pieschel)

ArtWorks for Milwaukee is a nonprofit volunteer-based organization that combines workforce development and art for teens who face barriers in academics and employment.  The program offers paid internships to Milwaukee-area teens.

Through art projects and mentoring, interns learn valuable life lessons and skills.  They are expected to fill out time sheets, meet project deadlines and learn to be effective team players, all with the end goal of being prepared for entry into the workforce.  In many cases, in addition to learning life lessons and skills, interns see the healing effects art can have on the mind, body and soul.

ArtWorks gives teens a healthy and effective way to express themselves and to break down barriers, no matter the individual’s academic or artistic background, Executive Director Terry Murphy said.

Although the program sees many successes among its graduated interns, Murphy mentioned that Madrigal’s story is particularly transformational. “He was dealing with some significant life challenges and the program helped him see that there were other options that were more positive for him to pursue,” said Murphy.

Madrigal became an Artworks intern in 2009 as a junior at South Division High School in the Clarke Square neighborhood. During that time he was getting into trouble in the streets, at home and at school, he said.

Despite his troublesome circumstances, Madrigal was treated fairly.

“The other interns could have judged me by my gang affiliation (or) appearance, but they didn’t.  They accepted me for who I was.  That’s something I’ll always remember,” he said. “It really taught me to think outside the box, and reminded me not to be too invested into my neighborhood, but to get to know people from different neighborhoods who take different paths and still relate to each other.”

The sense of brotherhood and belonging that he gained by being part of a gang was replaced by a deep sense of kinship with the people he met through art and the relationships he formed because of it.  After completing the program, he gradually distanced himself from his gang and began to seriously consider his future.

“He was receiving A’s on every assignment and every quiz.  He wanted to grasp as much learning as possible,” said South Division teacher and mentor, Blanca Sandoval. “We talked about his drawings and how he could someday open a business or gallery selling his work.”

“As I started growing up more and seeing the world differently, especially after ArtWorks, I started thinking about what I could do with my art.  I didn’t want to limit myself,” Madrigal said.

After high school, Madrigal pursued a degree in welding at MATC and graduated in December 2013. “I can transfer my art skills into welding. They’re interconnected with each other. To create something out of nothing, just using materials, is a self-fulfilling job. ”

Madrigal doesn’t intend to stop there. “I want to continue growing.  I don’t want to limit myself to one thing.  There’s only so much you can do with your lifetime, so why waste it doing negative things?  Why be down about your past? Use it to fuel your future goals.  Embrace the situation.”