You are here: Home / Home / Carousel / InstaPeace brings together teen leaders to create a climate of peace
Share this... 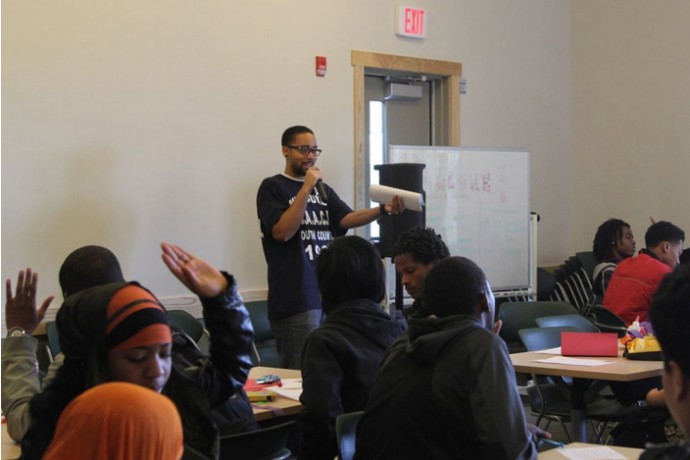 School leaders from nine Milwaukee Public Schools recently participated in InstaPeace, an event intended to promote non-violence sponsored by Arts@Large and Serve2Unite. Serve2Unite was formed in the aftermath of the murder of six people at the Sikh Temple of Wisconsin in August 2012.

Students ages 12 through 19 participated in discussions about peace and youth leadership at the Menomonee Valley Urban Ecology Center.

The event was coordinated by a group of Future Milwaukee participants who worked for nine months to organize it. The task was their final project in this year’s Future Milwaukee Leadership Program. 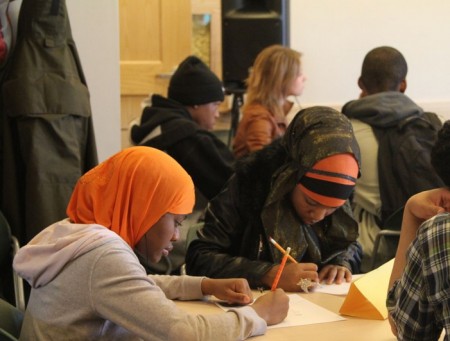 “We were asked to do something that wasn’t really affiliated with what we do professionally, so to come to a common consensus on what that might be was definitely something we appreciate now,” said Scott Heine, a Future Milwaukee participant. Heine is a business relationship manager for Educators Credit Union.

Serve2Unite chapters from nine Milwaukee Public Schools were represented at the event. The program teaches student leaders how to create a nonviolent climate in their schools and hometown communities.

“(The young people in attendance) were selected because they’re viewed as key leaders in their own schools,” said Heather McAvoy, Future Milwaukee participant and a communications strategist and consultant. “I think they’ll walk away from this event with more perspective which they can spread among the people they regularly interact with.”

The event opened with a performance by rapper Cincere, who was born and raised in Milwaukee.

“(Cincere) was trying to reiterate to the young people that they don’t have to be stopped by their circumstances and that creating community can really help propel them to the next level,” said Syd Robinson, who participated in Future Milwaukee participant. Professionally he is the youth and programs organizer at ACLU of Wisconsin.

Attendees completed a “Who and what is Milwaukee?” themed activity.  Although shy at first, they gradually opened up to tell their stories and share their opinions on reducing violence, organizers said.

“We didn’t want to have adults talking at the kids; we wanted them to steer and hold the conversations,” Heine said. “The students seemed to be engaged for most of our time here, which was our number one objective. They were safe to talk about the things they wanted to.”

“We wanted to emphasize community building through conversation,” Robinson said. “We had full student participation, everyone was excited and it seems like everyone had fun.”