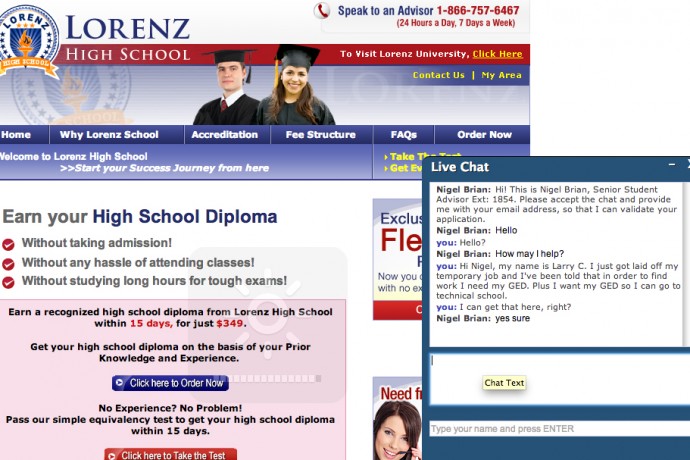 Lorenz High School is one of several unaccredited online operations that claim to offer applicants access to a GED certificate for a fee. (Online image capture 4/15/14 by Scottie Lee Meyers)

In a two-part special report, the Milwaukee Neighborhood News Service investigates “diploma mills,” a billion-dollar industry fueled by America’s dropout crisis that preys on adult students. In part one, we examine the predatory practices of online high schools that scam students into buying fake diplomas, and how they continue to evade legal consequences. Part two focuses on diploma mill storefronts in Milwaukee.

Lorenz High School touts at the top of its website, “Earn your high school diploma without taking admission, without any hassle of attending classes, without studying long hours for tough exams.”

Students can pay $349 to earn “high quality diplomas printed on traditional diploma paper… from a reputed and reliable institution” after scoring a 70 or better on four tests. The diploma can be at your door in 15 days, states the website.

Despite the implication that students would receive a GED allowing them to pursue higher education, Lorenz is not qualified to award a GED certificate. Nor are any of the eight online high schools reviewed by the Milwaukee Neighborhood News Service.

To better understand the recruiting tactics of these schools, an NNS reporter posed as a student interested in enrolling to earn a GED certificate.

What to do if you think you’ve been victimized

Consider these steps to help yourself and others from being victims of online high school scams.

•File a complaint with the Federal Trade Commission

•File a complaint with the FBI Internet Crime Complaint Center

•Contact your bank and file a chargeback against the credit-card transaction.

•File a complaint with the Better Business Bureau (BBB)

The reporter repeatedly specified that he needed a GED and asked, “Is the diploma you’ll be sending me when I pass your four tests a GED certified credential?” The answer was always, “Yes, it is a GED.” Video and screenshots captured these conversations.

Lorenz High School representatives gave a myriad of answers when asked where the school was located — from Philadelphia to South Carolina, and various locations in between. When the reporter called Lorenz, the school’s operators did not seem to be native English speakers.

Eventually the reporter was referred to “Frank Martin,” who said he was the head of admissions. The reporter informed Martin that he was talking to a reporter who earlier had posed as a potential student.

When told that representatives of the school repeatedly lied and otherwise deceived the reporter about awarding GEDs, Martin said it was all just a misunderstanding. “We are very honest with you. Nobody can give you a GED,” Martin said.

Martin said that Lorenz High School receives many calls every day from disgruntled students demanding refunds. He doesn’t attribute their dissatisfaction to the school’s misleading enrollment tactics. “It’s the stupidity of the people,” Martin said, referring to the students who enroll in the online high school.

Immediately after hanging up with Martin, the reporter called back Lorenz High School and asked to be connected with the head of admissions. The operator asked for a specific name and extension to connect the call. Eventually the operator transferred the call.

“Hi, this is Frank Martin,” said a man with a much different voice.

“Is this the same Frank Martin I spoke to no more than one minute ago?” asked the reporter. 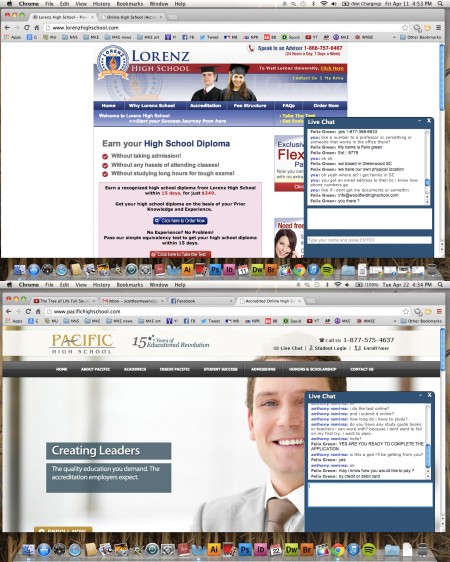 When asked to describe the nature of the previous conversation the man on the line was stymied. He then tried to enroll the reporter into the school.

“Is the diploma you reward me with a GED?” asked the reporter.

The question that perplexes adult educators at legitimate schools is how these shady businesses evade the law.

In his book, “Degree Mills: The Billion-dollar Industry That Has Sold Over A Million Fake Diplomas,” John Bear wrote, “If you hold up a convenience store for $50, you’ll probably be in prison before your Slurpee melts. But if you steal millions of dollars from thousands of people by selling fake degrees, no one seems to be able to do anything.”

Bear acknowledges the hyperbole of his statement, but goes on to outline the difficulties of policing diploma fraud, noting that investigations often involve overlapping agencies, including state attorneys general, consumer protection agencies, the FBI, the Federal Trade Commission and a host of others.

“There isn’t a unified and coordinated way in which there is somebody charged with looking at this issue,” agreed David Hooser, a board member of Educational Assistance Resources Network (E.A.R.N.).  The nonprofit works to provide valid educational credentials, especially for single moms, runaways, the homeless and exploited teens.

Hooser added that some students are complicit in the process. “[You] have an individual who is willing to acquire that fake credential,” he said.

How to recognize a fake school

It may be difficult to tell the difference between a legitimate school and a diploma mill. Many bogus school programs have well-designed websites. Before you pay any money to an organization that promises a diploma for a fee, the Educational Assistance Resources Network recommends that you be aware of issues such as these.

Accreditation: This is the most important consideration. Accreditation is voluntary and many fine schools are not accredited, according to the U.S. Department of Education. However, any school claiming accreditation must be on the Council for Higher Education Accreditation list.

Location: People who build fake schools don’t want customers finding them and typically don’t put an address on their websites.

Better Business Bureau: Although the BBB is voluntary, being registered with the agency is a good sign a school is real. The BBB requires full details of a company including address, owner information and full disclosure of business operations.

Studies, exams, interaction: If you’re getting a degree without doing anything, you’re dealing with a diploma mill. Legitimate online schools require work and interaction. Diploma mills grant degrees for “work or life experience” alone.  Accredited colleges may give a few credits for specific experience relevant to a degree program, but not a degree.

According to its review, Lorenz High School is a “Pakistan-based entity that owns dozens, perhaps hundreds of fake schools with Texas and Delaware ties.” The review states that the school is not a member of the Better Business Bureau, holds a fake accreditation and is a definite scam.

One administrator of HighSchoolReview.org, who wished to remain anonymous, said he received death threats from the Pakistani group for shedding light on its scam. Beyond state and federal agencies, the source blames search engines for failing to block the sites that have clearly been flagged as fraudulent.

“I’ve talked to several state’s attorneys’ offices, I’ve spoken with my senators, I’ve contacted the FBI, I’ve contact the FTC, and even Arne Duncan, the (U.S.) secretary of education. They all shrug their shoulders and say, ‘It is what it is.’ The only people that really have the power to fix this is… the search engines,” the source said.

In Wisconsin, interviews and email exchanges with state officials suggest that policing diploma mills is the responsibility of multiple agencies, and there doesn’t appear to be much coordination.

Dana Brueck, communications officer for Attorney General J.B. Van Hollen, said the Wisconsin Department of Justice has fielded no complaints regarding diploma mills and referred questions to other state departments.

“We have not received any complaints about possible GED scams, but you may want to contact the [Department of Agriculture, Trade and Consumer Protection], as consumer complaints generally are taken by DATCP,” Brueck said.

Jerad Albracht, DATCP’s senior communications specialist, mentioned the department is dealing with one complaint about Midwest Adult Academy — a well-known diploma mill formerly located in Milwaukee and the subject of the second part of this series — but has so far failed to get in contact with Elaine Spencer, the school’s owner and operator. Albracht also suggested contacting the Department of Public Instruction and other agencies for more information about online scams.

“DATCP hears about diploma mill operations occasionally, but not often. If consumers are unhappy about their transaction with a business, they can file a written complaint,” Albracht said. “If the issue is under the jurisdiction of another agency, we will forward the complaint on the consumer’s behalf.”

Albracht added, “You may want to bounce these questions off of the Wisconsin Educational Approval Board.”

An official with the Wisconsin Educational Approval Board said the board handles only post-secondary schools. He suggested contacting the Department of Public Instruction (DPI).

In an earlier interview, Beth Lewis, DPI’s GED administrator, said the state on several occasions has looked into referring Midwest, and other schools like it, to the Department of Justice.

Referring to Midwest Adult Academy, Lewis said, “We’ve all learned the caveat ‘buyer beware,’ but sometimes this preys on people and that’s the hard part. Part of me hopes there’s a great penalty for these people.”