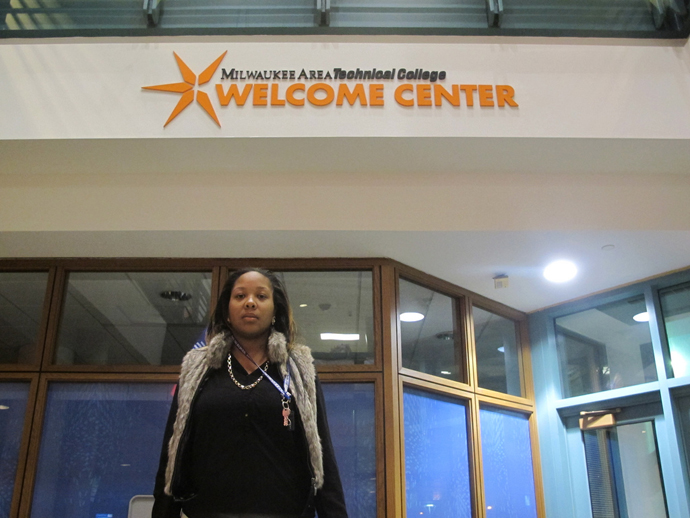 Ask instructors at any of the city’s official GED testing centers for names of people who have been scammed into buying a fake degree from a “diploma mill” and you’re likely to get a list.

Some of Milwaukee’s adult educators keep a blacklist  of bogus schools on file. The barrage of fraudulent diplomas has clearly led to fatigue as some administrators confessed to no longer reporting the scams to authorities.

Tony Tsai, adult education manager at UMOS, said he sees fake diplomas every month, occasionally several a week, at his testing center on the South Side. “It hurts the whole community, but especially the working poor and the less educated. They’re more vulnerable and more desperate. To me it’s disgusting. It’s criminal. It’s amazing what some people will do to make a buck,” Tsai said.

It’s the same story on Milwaukee’s North Side. Tim Foran, a senior instructor at YWCA, said he and his coworkers used to see fake diplomas “all the time,” although they’ve been less common lately. “My coworkers and I would talk about it and wonder how these shady businesses continue to get away with it,” Foran said.

Fueled by the Internet and high dropout rates, diploma mills have grown to become a billion-dollar industry by preying on well-meaning students and cheating them out of hundreds of dollars. The for-profit schools exist increasingly online, but also as storefronts. To escape scrutiny and their victims, they often change addresses and phone numbers.

The schools give students an enticing sales pitch: no classes and no homework. Just pass four take-home tests and a diploma is yours in two weeks’ time. The diploma’s calligraphy, gold-pleated seal and superintendent signature all support its authenticity. Actually, it’s a virtually worthless piece of paper because the institution’s accreditation is not recognized by the U.S. Department of Education. Without proper accreditation, the schools operate without supervision of a state or professional educational agency and there’s no way to verify the quality of their education.

Diploma mills maintain the guise of legitimacy through false advertising, if not criminal fraud. An undercover investigation by the Milwaukee Neighborhood News Service revealed how far some businesses were willing to go to enroll students, and how they evade law enforcement due to the complex issues of federal versus state jurisdictions.

With Milwaukee Public Schools’ four-year graduation rate at 62 percent and thousands of seniors failing to graduate each year, Milwaukee is a market for diploma mills.

Statewide, U.S. Census data shows 11 percent of Wisconsin adults older than 25 do not have a high school diploma or its equivalent. The Wisconsin Department of Public Instruction (DPI) estimates that about 10,000 of these adults will try to earn either a GED or high school equivalency diploma each year. The GED, or General Educational Development, is a set of tests that measures proficiency in science, math, social studies, reading and writing, and is designed to determine whether the test-taker has a high-school graduate’s level of knowledge.

Eager to find higher-paying jobs, many high school dropouts turn to vocational colleges such as Milwaukee Area Technical College (MATC) to restart their education and earn state certifications in various fields. Students are often required to show proof of a GED before enrolling, and it’s during that paperwork process that many scams surface.

MATC administrators said they don’t keep data on the number of students who submit fake diplomas and wouldn’t want to speculate. In 2008, MATC told the Milwaukee Journal Sentinel that 1 to 2 percent of admission rejections were due to applicants using diplomas from unrecognized correspondence schools.

Although Kappel could only offer anecdotal evidence, she said fake diplomas have decreased recently, an observation echoed by other area instructors. Some attributed the trend, at least in part, to the shutting down of a couple of high-profile storefronts in Milwaukee.

In 2010, Russell Harris Jr. was charged with federal education loan fraud after he allegedly collected more than $108,000 in student financial aid from the U.S. Department of Education.

Harris operated Wisconsin University High School from a suite located at 7905 W. Appleton Ave. The school offered quick-fix diplomas for $150. Harris encouraged students to enroll in online college courses after completing Wisconsin University tests. He was accused of filling out federal student loan and grant applications for the students that would direct the money to his high school’s office, and ultimately himself. The school had closed by the time the charges were filed. 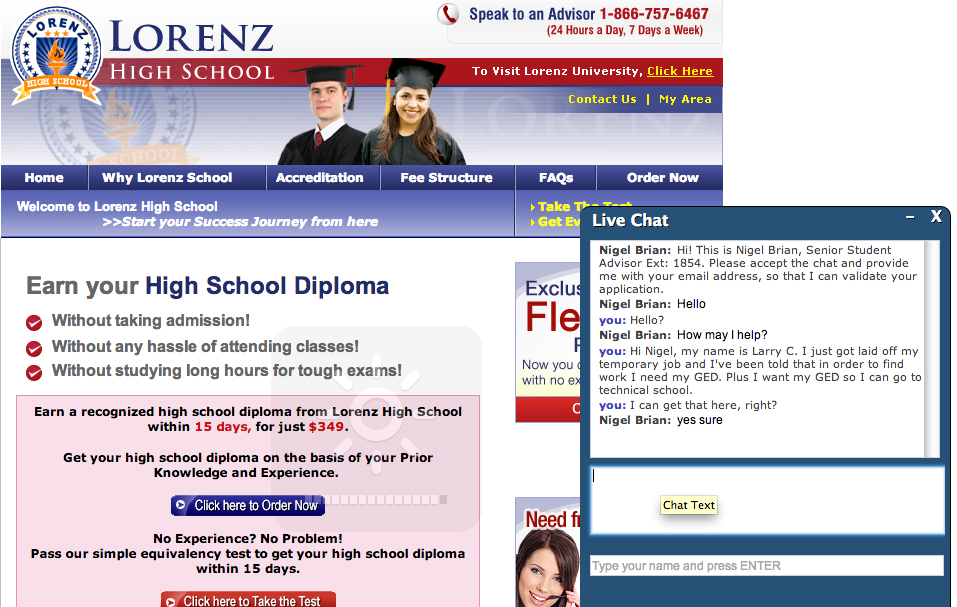 An undercover investigation by the Milwaukee Neighborhood News Service revealed how far some online high school programs are willing to go to enroll students, and how they continue to evade law enforcement.

But the most notorious Milwaukee-based scam, the one every source mentioned by name, remains Midwest Adult Academy.

The faith-based, home-study school promised students a quick-fix diploma after they paid at least $150 and completed high school equivalency tests. Former students have reported that they thought they were getting a GED or its equivalent, only to find out later when applying for colleges or jobs that the diploma was worthless because the school lacks the appropriate accreditation.

In a previous interview with the Milwaukee Neighborhood News Service, Elaine Spencer, owner and operator of Midwest Adult Academy and a Milwaukee native, expressed suspicion regarding government-funded GED programs and criticized their graduation rates. She said her school offers an important alternative to those programs and has always been honest about that. “We tell every student that our diploma is not accepted everywhere and is not a GED,” Spencer said.

Midwest Adult Academy’s Facebook page and other online forums suggest a different story. There are a dozen comments on the school’s Facebook page from disgruntled students demanding a refund and a phone number to reach Spencer.

On October 19, 2010, the school posted on its Facebook wall, “Starting November 1, 2010, refer a friend or relative and get a $25.00 gift card once they enroll. No Adult left behind!” Underneath the status are two comments: “If I don’t get my money back I’m whooping ass,” and “I can’t get in no college with this shit.” There are scores of similarly toned comments on an online consumer protection message board.

Josefina Martinez enrolled into Midwest Adult Academy thinking she was earning her GED. Years after she passed the academy’s tests and received its diploma, she decided to apply for a new job in the healthcare industry. Her prospective employer conducted a basic background check and investigated her educational credentials. The company told Martinez that it wouldn’t be hiring her because her high school diploma wasn’t valid.

She left embarrassed and angry. She tried contacting the academy, but none of its listed numbers worked. “I was furious. Me and my friend went down to Bayshore mall because that’s where we heard they were located now. When we got there it was just a bunch of lawyers’ offices. They said a lot of students come in looking for a refund,” Martinez said.

J.P Fernandez, a small business lawyer whose law firm shared the suite with the school, said he almost relocated because of the “obnoxious” volume of music that came from Midwest’s office, and the steady stream of irritated students walking through his door looking to speak with Spencer.

According to Better Business Bureau records, Spencer relocated to Atlanta in April 2011, and has rechristened the school as Ecclesia Leadership Institute.

Although the school has left Milwaukee, its presence lingers. Jerad Albracht, senior communications specialist with the Wisconsin Department of Agriculture, Trade and Consumer Protection, said the department recently received a complaint against Midwest Adult Academy from a former student who purchased a GED in 2007 and is seeking a refund.

“The complaint is currently in our mediation process, but we have been unable to contact the business as yet,” Albracht said.

While the number of Milwaukee’s storefront diploma mills may have declined recently, the scams continue to proliferate online. The fraudulent companies often show up in the top results of search engine inquiries. Many individuals have received cleverly disguised spam emails from online high schools reminding students that a diploma is just a phone call and credit-card transaction away.

In an effort to fight back, GED Testing Service filed, and eventually won, a lawsuit against a network of online schools that were luring students by misusing the GED trademark on their websites. It appears that some online schools continue to violate the trademark agreement.

Armando Diaz, GED’s public affairs specialist, said the lawsuit was a loud message to other online scams, and served to educate the public about how to earn a valid GED certificate.

Prior to 2014, GED exams were administered through the traditional paper-and-pencil test format. That has now been switched to a computer-based test. Some educators fear that when students hear that the test must be completed on a computer, they’ll be confused and equate it to the fraudulent online tests. Administrators are careful to describe the specific nature of the exam for that very reason.

“We remind students in every state that our test is not online. You can’t do it while on the Internet from your house, or at the library, or at Starbucks. You have to go to an official testing center and it can only be accessed by registering through GED.com,” Diaz said.

GED also launched a fraud campaign to help direct complaints to the proper authorities. In a little more than a year, Diaz said GED has received more than 245 complaints from students across the country.