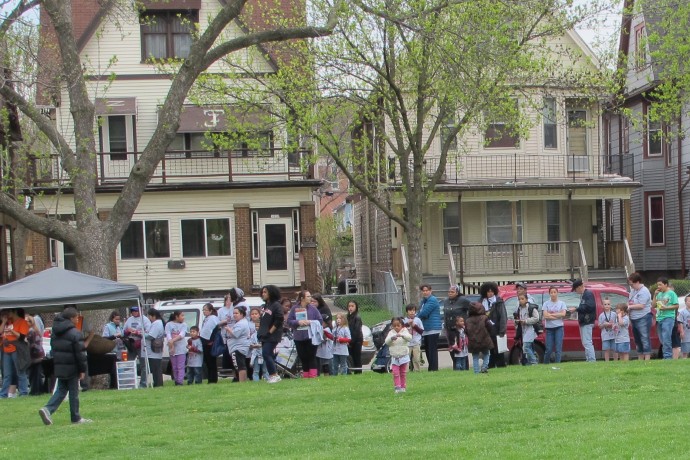 Nate Gaskin got his young son out of bed early on a weekend to clean up a park. Asked why, Gaskin said he wanted to show him what community means.

“When you live in a community, you have to give of yourself and of your time to make that community a better place to live,” he said. “To pass that onto the next generation, we have to get our kids in stuff like this so that they can understand the importance.”

Gaskin was one of hundreds of Clarke Square and Layton Boulevard West residents that converged on Clarke Square Park recently for the seventh Annual Basura Bash organized by Safe and Sound, Inc. Participants cleaned in and around parks in both neighborhoods and were treated to a community “fiesta” for their efforts.

Bree Spencer, director of the community partners program at Safe and Sound, coordinated the event for the third time. It was the first year the bash was held in Clarke Square Park.

More community organizations than ever before participated in this year’s event. They included Clarke Square Neighborhood Initiative (CSNI), FaithBuilders Community Teams and the Milwaukee Sheriff’s Department. 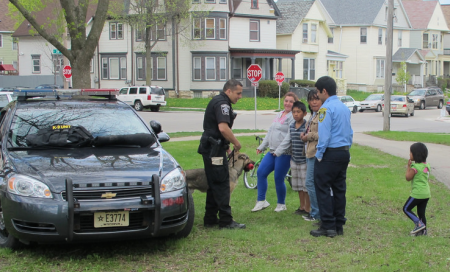 Deputy Sheriff Roberto Hernandez tells children about his job with assistance from his police dog.

“They’re building a relationship and cleaning together and talking together,” he said. “That’s what’s key for us: to continue the conversations that we need to make this a better place to live.”

According to Spencer, illegal activity such as drinking and drug use cast doubt over Clarke Square Park’s safety within the community. She hopes Basura Bash will promote public safety as well as cleanliness.

“It’s really good to have public use areas that are clean and safe and that kids can come and play at,” Spencer said. “We want to make sure people feel safe and comfortable coming to the park and welcome in their own backyard.”

Clarke Square resident Tracy Heddinger, who has lived in the neighborhood for 1-1/2 years, echoed Spencer’s sentiments.

“It could be a safety issue for the kids that come out to play,” Heddinger said. “If you have a cleaner park, it’s a better environment for them to play in.”

That need for public safety explains the prominent presence of Milwaukee police and sheriff departments at the event. More than two-dozen officers, including Explorers, young aspiring police men and women in a training program, cleaned the park and interacted with residents.

“It brings together the community with law enforcement,” sheriff’s deputy Ramon Hernandez said. “It brings relationships between the two of us.

Throughout the event, the younger participants mobbed Hernandez and his police dog at his vehicle at the edge of the park. Basura Bash gave him an opportunity to educate children about the role of police officers in their community.

Spencer agreed with Hernandez. She said the event put a face to the word “police.”

More than anything, Basura Bash brought a diverse community together to improve their quality of life, and that’s why Gaskin and his son gave up their weekend morning to clean.

“The goal is to make sure that we are all engaged in the community, that we all have a feeling of responsibility,” he said. “We’re responsible for not only the way it looks around here, but also for the crime and for everything else.”