You are here: Home / News / Arts and Recreation / Local soccer group provides kids with goals on and off the field
Share this... 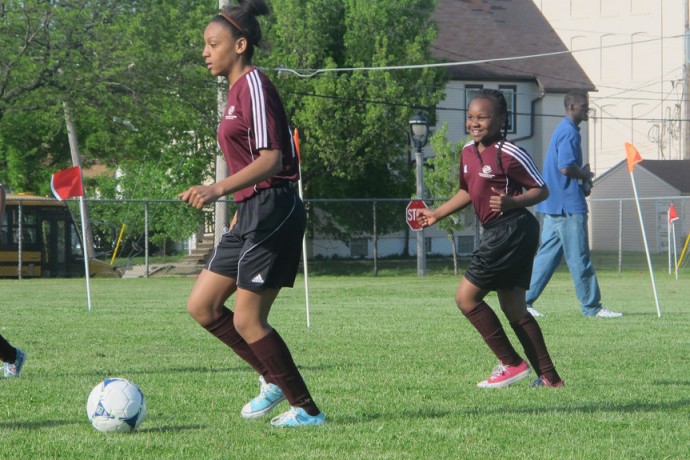 Hundreds of students from across the city met last week at the Fitzsimonds Boys and Girls Club in Metcalfe Park to close out the Soccer for Success season with a tournament. (Photo by Scottie Lee Meyers)

Nathan Thompkins is a soccer missionary. As the operational manager of the Milwaukee Urban Soccer Collaborative (MUSC), he promotes the “beautiful game” and its lessons of fair play and physical fitness to a corps of inner-city kids who many have never played the game before.

“The stigma of youth soccer in this country is that it’s a suburban game that black kids won’t play. We’re taking that stereotype and flipping it on its head,” Thompkins said.

MUSC hosted a soccer tournament to close out its second year of the Soccer for Success season last week at the Fitzsimonds Boys and Girls Club, 3400 W. North Ave. in the Metcalfe Park neighborhood.

MUSC serves as the program manager, partnering with the Boys and Girls Clubs of Milwaukee, St. Anthony School of Milwaukee and St. Charles Youth and Family Services. 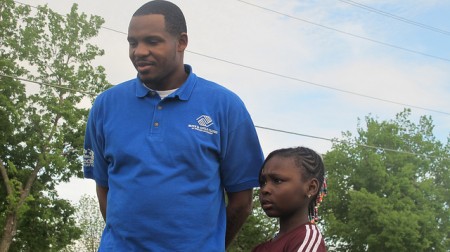 More than 300 kids who reside in Milwaukee’s central city met after school three times a week for two, 12-week soccer seasons during the school year. In addition to soccer practice, the 90-minute sessions included educational activities about the basics of nutrition, making healthy lifestyle choices and maintaining healthy eating habits.

MUSC was one of 27 organizations nationally to manage the Soccer for Success program for urban youth, and the only organization chosen in Wisconsin.

Kate Schroder, MUSC’s executive director, said offering students the opportunity to learn how to eat healthy and have fun exercising through the sport of soccer will lay the groundwork for a lifetime of wellness.

“Our goal is to help young people practice and reinforce positive values like working together, thinking ahead and living a healthy lifestyle,” Schroder stated in a press release.

Tyrone Daniels has seen the transformative power of the soccer program. The 32-year-old coaches two all-girl teams at the Daniels-Mardak Boys and Girls Club, 4834 N. 35th St., a place where he has been going since he was 12.

Although Daniels is relatively new to soccer, it hasn’t stopped him from being a great coach. Thompkins and others at last weekend’s tournament praised his mentorship skills. His players respect and listen to him — whether he’s asking them to play fair or to put down the chips and replace them with fruits and vegetables.

“I love this program and so do my kids. I’m shocked by how much each of them has improved on and off the field. I wish we had this when I was growing up,” Daniels said.

Beyond Soccer for Success, MUSC hosts recreational soccer leagues, as well as coaching and referee training programs throughout the year. In all, about 2,5000 people participate in MUSC activities annually.

The organization was founded by Dennis Krause, former Milwaukee Wave owner, in June 2005 as the Milwaukee Wave of Kindness, but changed its name in 2009 to better reflect its purpose. Approximately a third of MUSC’s total $150,000 budget comes from registration fees, while the rest is raised through private and foundation donors, said Krause.

“Many years ago we recognized that inner-city kids weren’t playing soccer and wanted to get them involved,” said Krause, who now serves as MUSC’s president.

“It’s such an easy game to play and enjoy. You don’t need a field or goals. Just a ball and a few friends,” Krause said.