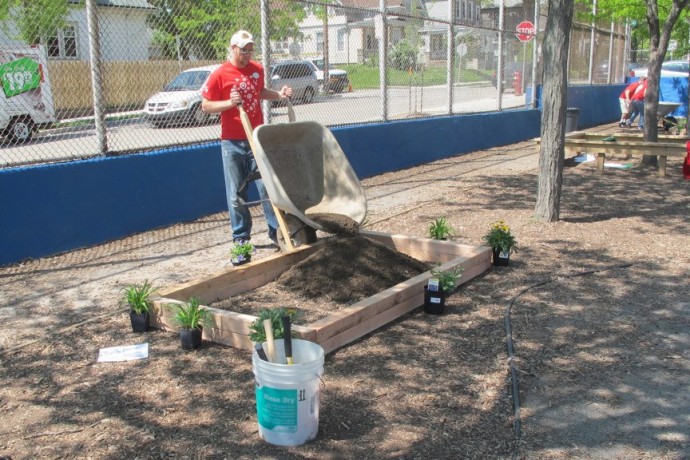 A Target volunteer builds a raised-bed garden on the playground at Doerfler School. (Photo by Patrick Leary)

As morning recess began at Anna F. Doerfler School in Silver City, the students burst through the doors to find more than 50 volunteers painting hopscotch lines and decorations on their concrete playground.

Strutz, a Waukesha resident and guest services attendant at his hometown Target, was one of at least 50 volunteers from Target and City Year Milwaukee who helped beautify Doerfler recently. The event, part of the TARGET: Milwaukee Matters partnership between Target and the Zilber Family Foundation, took place at a Milwaukee public school for the second consecutive year. In April, City Year volunteers decorated inside Doerfler.

“We’re excited to be here at Doerfler,” said Luke Fickbohm, a development associate at City Year Milwaukee. “It’s a neighborhood school. Also, this is a neighborhood the Zilber Foundation focuses on, and its right next door to some of our partner schools.” Silver City is one of three neighborhoods that make up Layton Boulevard West. 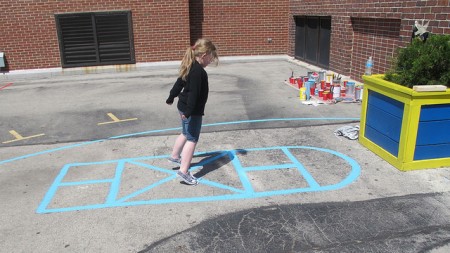 A student plays hopscotch on the newly painted playground. (Photo by Patrick Leary)

The school opened in 1902 as Scott Street School. Its namesake, Anna F. Doerfler, became the first female principal in Milwaukee Public Schools history in 1907. She presided over Scott Street School for 15 years until her death in 1922, at which time the school was renamed in her memory.

Today, Doerfler serves a primarily Hispanic, bilingual student body of 800 children from grades K-3 to 8. Assistant Principal Bryan Freeman takes pride in what his school does for the surrounding community.

“We run a pretty good school, I like to think,” Freeman said. “Ninety percent of the kids who start here, finish here, which says a lot about the commitment and the families.”

Freeman, in his eighth year at the school, taught technology for six years before his recent promotion. He sees the service project as important for Doerfler’s future.

“It’s good for the self-esteem and bringing in community partnerships, which is what we need,” he said.

Volunteers painted lines on the playground, sports figures on the playground’s walls and educational murals on the school’s interior. Jaime Lau, the executive team leader of human resources at the Chase Avenue Target, led the contingent of volunteers in red shirts.

“Education is so important for the kids in the community and to make our community stronger as the kids grow up,” Lau said.

As the kids sprinted out for recess toward the end of the service project, they hopped over the newly painted lines and sat down to converse with the red-clad strangers scattered across their playground.

“I think it’s very good,” Doerfler parent Tian Le said. “I see that they get along and that they can talk with the volunteers. We are thankful for [them] coming up and doing a good job in [our] school.”

Freeman marveled at the respect the students showed for the work the volunteers did at both recent beautification events.

“The kids are genuine and sincere,” he said. “Some schools you might see a different attitude. Very few of the displays have been touched and it’s been almost a month and a half. It shows the kids appreciate it.”

“The school is the center of the community here,” added Lau.