You are here: Home / News / Arts and Recreation / Teens share stories of gun violence at Our Next Generation
Share this... 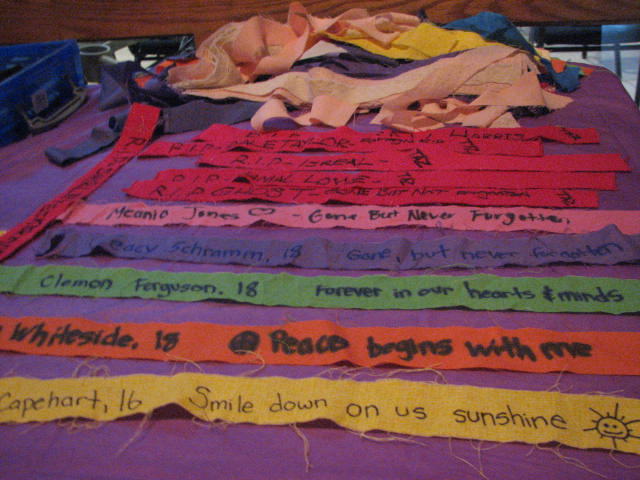 Walk by the garden at 33rd and Lisbon and you’ll see bright-colored pieces of cloth tied to a metal leaf sculpture. Each strip is inscribed with a name and a personal message. Together, they call attention to victims of gun violence in Milwaukee.

The individual cloth memorials were created at an anti-gun violence summit at Our Next Generation, 3421 W. Lisbon Ave., attended by local teens fed up with gun-related crime and violence. Our Next Generation and Serve 2Unite hosted the summit to provide an opportunity to discuss causes and solutions.

Arno Michaelis, a principal at Serve@Unite, suggested that people misconstrue what it means to be a “snitch,” explaining that the term has come to mean anybody who calls the police. Not wanting to be snitches, they refrain from contacting authorities for help. 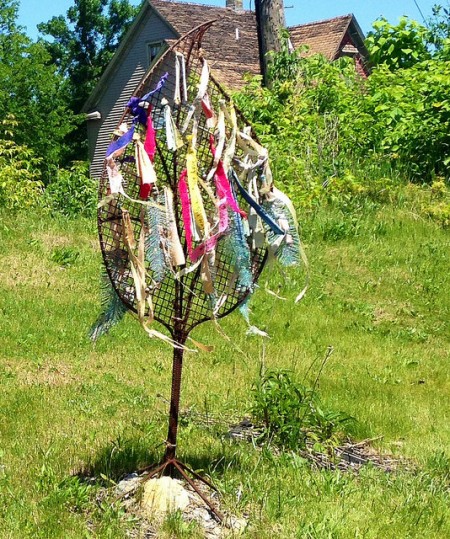 A sculpture in the garden at 33rd and Lisbon becomes a memorial to victims of gun violence. (Photo by Hannah Byron)

An admitted former criminal, Michaelis noted that the real definition of a snitch is someone who commits a crime, gets caught and turns someone else in, in order to get a lighter sentence. “If you haven’t committed any crimes, you can’t be a snitch.”

South Side resident Darrick Tate suggested that bringing the feeling of solidarity back into the community and communicating with one another could reduce violence.

“I grew up on these streets, and it never used to be like this. If you know young kids that need someone to talk to, reach out and talk to them,” Tate said.

Jackie Garza, a 13-year-old attending Westside Academy 2, said she lost a friend due to gun violence.

“She was 10 and got shot in the head playing at the school down at Clarke Street,” Garza said. “She got shot from two people going back and forth shooting at each other.”

Phylicia Thompson lost her 19-year-old brother on April 20 to a bullet.

According to Thompson, her brother was staying at their grandfather’s house when he let a person he trusted into the house, who later invited others inside. They robbed and murdered her brother while he was sleeping. Her family searched for two days until her cousin discovered him in his grandfather’s bed.

“As much as I want to go back for revenge, as much as I would like to see them hurting the way my brother was hurting when they killed him, it’s a chain reaction,” said Thompson.

Thomson added, “If I go back to kill them, one of them is going to come back and kill me or one of my family members. We need to break this chain and make a different one.”