Easter Dethrow once drank so much that he hit 10 cars on one street. The next morning he woke up in a jail cell with sore ribs and no recollection of what he had done the night before.

Dethrow knew he had to turn his life around.

“I thought I might as well get sober,” Dethrow said. “If I don’t stop I’m going to go to prison.”

Today, Dethrow works as the neighborhood minister at Cross Lutheran Church on 16th and Walnut streets in Lindsay Heights. He has been sober for 25 years and a licensed counselor for 24 years.

Dethrow works with organizations throughout the area to help people who are fighting with their addictions. “I work with men on the streets, in shelters and treatment centers, and anytime someone needs to go to treatment, I can get them in just like that,” Dethrow said. 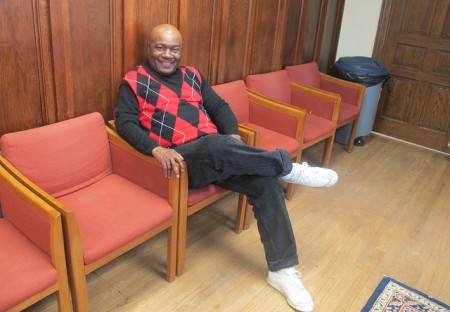 Easter Dethrow is the neighborhood minister at Cross Lutheran Church and a licensed counselor. (Photo by Brittany Carloni)

According to the Wisconsin Department of Health Services, about 448,000 state residents 12 years and older have a substance abuse disorder. The economic impact of alcohol and other drug abuse (AODA) is more than $2.6 billion each year in lowered productivity, health care costs, criminal justice system costs, injury and death.

At Cross Lutheran Church, Dethrow works with the Bread of Healing Empowerment Ministry, which includes a food pantry, job readiness training, and alcohol and other drug addiction and life support groups. Dethrow helps facilitate one of the support groups, called Men of Faith.

“The format of it is men helping men. If something is going on with another man we get together and try to see if we can help this person out,” Dethrow said. “This person might need somewhere to stay or … need someone to vouch for them for a job or … to do some community service or whatever. Everyone chips in. Everyone brings something to the table.”

Cross Lutheran Church holds the Men of Faith and Women of Faith groups on Wednesday afternoons. The groups do not necessarily follow the Alcoholics Anonymous 12-step model, but some of those concepts are involved, according to Pastor Arlen Solem, associate pastor and director of the Bread of Healing Empowerment Ministries at the church.

“Men in general are not very good about talking about difficulties and emotions and being vulnerable. However, the men in the Men of Faith group oftentimes are,” Solem said. “The men talk about how they are dealing with personal issues, as well as sadness and pain in their lives.”

Parish nurse and substance abuse counselor Linda Radder started and now facilitates the Women of Faith group. She explained that most people who use alcohol and other drugs do so because of trauma they’ve experienced. “Once you help them figure out what the trauma was and learn to deal with it, then they do much better,” Radder said.

Dethrow said that he believes that alcohol and other drug addictions result in poverty.  “Most of the people, men and women in the city now, they’ve got addiction so bad, they spend all their money [on drugs and alcohol] that they should be trying to buy some milk or something,” Dethrow said.

“People don’t have a whole lot of resources so they have to do what they have to do. They sure can find their way to get something to drink, though. I remember doing it myself.”

Dethrow has used his experiences to turn his life into an example for those he helps throughout Milwaukee.

“I think he’s a very good example for [the Men of Faith] that you can make it. He was those men. Now he isn’t and I think when they see him they see that they can be something different,” Radder said.

Solem believes Dethrow has a great impact on the people and programs with which he is involved. “He meets so many people and makes so many people feel special. People really trust and love him,” Solem said. “There also are a number of people who have really turned their lives around and Easter was a major part of that.”