You are here: Home / Neighborhoods / Northwest / Capitol Heights / Young African immigrant finds his place in Milwaukee by helping others
Share this... 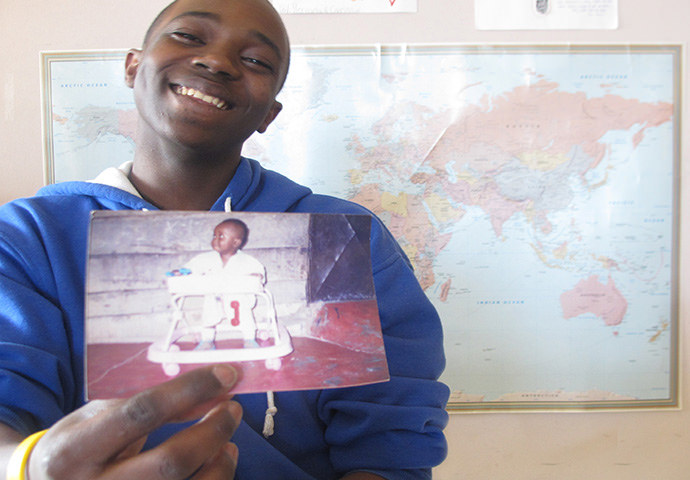 Guy Chinang is proud of his African heritage. (Photo by Devi Shastri)

Year after year, two Cameroonian parents made the trek to an Internet café, their four young children dawdling along behind them. There, they tried their luck at an annual drawing to get their green cards. In 2008, they won the lottery and the family moved to Milwaukee in November 2009. Guy Chinang was 11 years old.

Since his arrival, Guy (pronounced like “tea” with a hard “g”) has experienced the difficulties of being an immigrant in America. He was the new kid with the accent, often the butt of his classmates’ jokes.

“They use that to judge you, you know. Sometimes they see that you’re from Africa and they try to put you down a little bit. Some people feel like because I’m African, I’m supposed to be below them,” Guy said.

After years of being bullied, he has simply stopped giving his tormenters the benefit of a response. He always greets everyone with his beaming smile and open mind, whether or not they do the same. 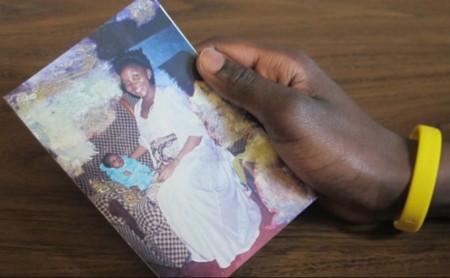 Guy Chinang holds a photo of himself as a baby, taken when he was in Africa. (Photo by Devi Shastri)

“Guy had a hard time going his own way because we were always [in school] with him,” said Raoul Chinang, Guy’s oldest brother. After his siblings graduated, Guy found himself having to readjust without them, a task Raoul believes he has done very well.

Today, at Marquette University High School, 3401 W. Wisconsin Ave., Guy uses his experiences from different countries, school systems, volunteer organizations and extracurricular activities to get involved in his school and community. He ran for president of the Junior Class Club on a platform of encouraging unity and equality for minority groups in the primarily white high school. Though he did not win, he raised awareness about diversity issues.

“You have to be proud of who you are. I’m proud of being African,” Guy said.

Guy spends many hours volunteering at the Pan-African Community Association (PACA). He was assigned to PACA for a summer job through the Milwaukee Area Workforce Investment Board’s “Earn and Learn” program. He tutors some of the many immigrant and refugee youths, primarily from Africa, who have made PACA their community center.

“Guy has a much more nuanced view of world events and historical events than other people his age that I’ve met, so he’s been someone that I get excited to talk to,” said Michael Grochowski, PACA’s education program director.

Guy is a minority among minorities. According to the U.S. Census Bureau, in 2010, only 4 percent of the approximately 40 million foreign-born people in America were from Africa.

Guy pointed out that many Americans he has met know little about Africa. “I can never recall one day where I went to sleep without eating when I was back in Cameroon. Never in my life. People think all the animals they see in the zoo, we live with them. I’m pretty sure people do, but it’s not like all of the 20 to 25 million people in Cameroon live with monkeys and tigers and lions.”

Guy is considering a career in law or teaching at the collegiate level because he believes those are the best paths for him to give back to Cameroon and the rest of Africa in the future. “I’m looking for a way to get involved in shaping or helping Cameroon or another nation, but it’s difficult to get into the system if you don’t have the knowledge. I want to be in a position where I can help improve people’s lives.”

Guy has worked hard to become part of the Milwaukee community by giving back as a volunteer.

“I always feel like I take my life for granted. I really want to meet people who have a tougher life than me, people who are more in pain, because I want to look back and say, ‘Now you need to be more careful of what you do and say and how you react.’ You learn from experience and you learn from other people’s stories.”