Ninety-three percent of the high school students in a program run by the Housing Authority of the City of Milwaukee that encourages school attendance and academic achievement graduated this year. Education Initiativeworks with students and families in public housing.

The initiative, which began in 2005, celebrated student accomplishments at the recent 2014 Student Recognition Awards.

“There’s a strange thing that happens when kids go to school every day. They graduate from high school,” education specialist Darrell Finch said.

High school graduation rates for students in the program have ranged from 75 to 100 percent since the 2006-2007 academic year. As a part of their lease, families living in Highland Homes, at 17th and Highland, and in scattered-site housing are required to be a part of the Education Initiative and students must attend school, according to Paul Williams, communications coordinator.

This year, Finch and Education Assistant Tracy Revels worked with 392 youths up to 18 years old from 134 families to connect them with resources to further their success in school. The Education Initiative provides after school programs, connects students with pre-college programs and offers college tours.

Finch and Revels also work with families to help parents get their GEDs or get into a college, Finch said.

Finch grew up in Milwaukee public housing and worked with the Housing Authority as a public safety officer before joining the Education Initiative. He brings that experience to working with youth and their families.

“Growing up in public housing … gave me a foundation of saying all kids can graduate if you can provide some kind of support to them and let them know that you have high expectations, because so many people have low expectations of them,” Finch said.

“You just have to surround them in a climate or culture of people who have high expectations,” he added.

The awards ceremony recognized students of all ages who earned a grade point average between 2.5 and 4.0. Awards were given to the most improved students, adults enrolled in school or college, family of the year and student of the year. Graduating seniors were also recognized at the ceremony.

One of the students recognized was Deja Jones, 18, who finished her junior year at Hope Christian High School, and was recognized for being one of the most improved students. She achieved a 3.5 GPA this year.

“It feels good because at first I wasn’t good in school. The lowest I ever had was a 0.9 and now I’m a 3.5. I was on high honor roll all four quarters and I never was on honor roll in my life. It feels good,” she said.

After high school, Jones said she would like to study nursing. “I want to be a nurse because I like helping people. I love old people and kids,” she said.

Jada McMillian, 18, was named student of the year at the event. McMillian graduated from Milwaukee High School of the Arts this spring. She will be attending MATC to study physical therapy and hopes to transfer to the University of Wisconsin-Milwaukee.

McMillian just finished her first year in the Education Initiative program and believes it helped encourage her as a student.

“It encouraged me to do what I love, keep in education, keep going on with it,” she said.

McMillian performed piano music at the awards ceremony. She said would like to continue to incorporate music into her life.

“I want to be an NBA sports therapist and then I want to minor in music because I don’t want to forget what I’ve learned in high school. Maybe one day I’ll make it a profession,” she said. 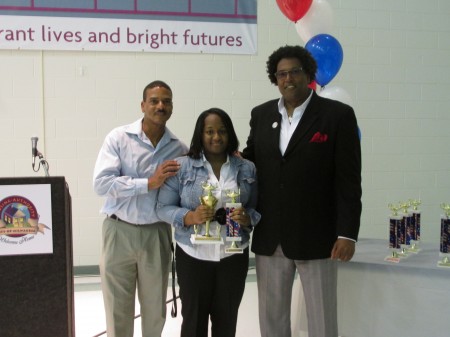 Sayvon Friend, Jones’ brother and a graduate of Messmer High School, just finished his second year at UW-Milwaukee, and plans to go to culinary school at Le Cordon Bleu in Orlando, Fla., in the fall. He was recognized for continuing his education.

Friend, 19, a previous “student of the year,” said that he is grateful for the resources and opportunities he received through the initiative.

“I tell Mr. Finch all the time that I greatly appreciate everything they’ve been able to provide for me and the family because they are a major impact on everything that we try to do,” Friend said. He added that it feels good “to know that you have somebody there to pick you back up when you’re falling or to help you with anything that you may need.”

Finch said he enjoys the Student Awards Ceremony because it gives younger siblings a chance to watch their brothers and sisters graduate.

“Because now it’s the norm. A new norm. Everybody graduates in the household,” Finch said.